That's a short while away, but in the meantime, we want to suggest alternative places to get the best view of Washington, DC. This post covers the best places to go to get a bird's-eye view (or as close to it as you can get) of the city. Washington DC is a rather short city, so don't expect many high rise buildings. This means there are not that many places to get a view of the city, but the few places you can get it from are unobstructed.

Our suggestions for alternatives to Washington Monument for great views of Washington DC:

This magnificent building used to be our post office! It is now the oft-talked about Trump International Hotel.

One of the regulations in leasing this government property was that the hotel must allow non-guest access to the clock tower, which will still be managed by the National Park Service.

There are two ways to get a nice view of the National Mall from the US Capitol Building. One requires some political pull and the other is open to everyone.

If you can finagle a tour of the Speaker's Office, you'll be able to stand on the balcony on the west side of the Capitol looking down the National Mall to view the U.S. Grant Memorial, Washington Monument, Smithsonian Castle, and Lincoln Memorial.

This can be hard to do and is really luck of the draw, but when arranging your guided tour of the Capitol through your congressperson just ask if it's possible!

Alternatively, the view from outside at the top of the stairs on the west lawn of the Capitol is just as lovely. That view is available 24/7, no ticket or security required. (See a video here).

The only exception is if they are setting up for an event, like Inauguration, as the West Lawn is closed for set up. This is a great stop on the way to our Capitol Hill & Library of Congress Walking Tour.

For more on visiting the U.S. Capitol Building, click here. 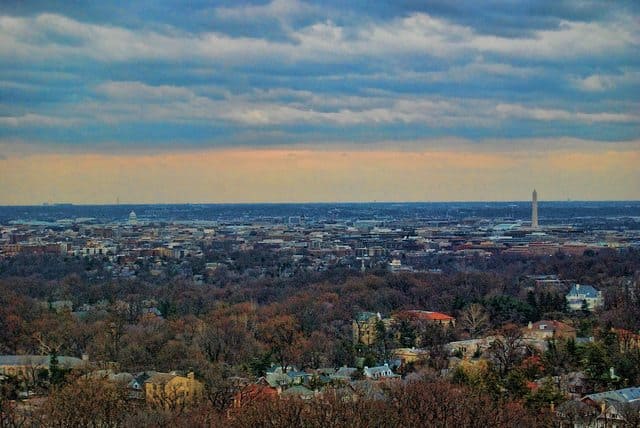 The Washington National Cathedral sits atop the highest point in DC. This makes it the perfect place to see the city from, even though it's a bit out of the way, nestled in a residential area.

You can take a self-guided walk up to the Pilgrim Observation Gallery by using the elevators near the front entrance to the Cathedral by the gift shop on the main level.

The Cathedral also offers Tower Climbs which are guided tours that get you closer looks at gargoyles, stained glass and of course - the view. These are generally only offered in Spring.

For more on visiting the National Cathedral, click here.

The Kennedy Center is one of the most popular performing arts centers in the nation. With over a million visitors annually, the center puts on a large number of performances throughout the year, some of which are free!

The best part about the Kennedy Center is the Rooftop Terrace, which is completely free and open to the public and gives you an amazing 360 view of Virginia and Washington, DC.

You can go during the daytime before a performance or come in the evening to see the city lit up and maybe catch a proposal, as it's one of the most romantic spots in Washington, DC!

The Air Force Memorial can be seen from most of DC - which means you can see a lot of the city from there as well. The three silver spires you see lit up at night? That is the US Air Force Memorial, located across the river in Virginia. Located not far from Arlington National Cemetery, the view from this memorial offers a great shot of the city and the cemetery as well.

While a bit out of the way for most people visiting Washington, DC, the Air Force Memorial is accessible by metro, car, and some bus tours.

VIEW OF DC AT CEB TOWER

'The View of DC' is the observation deck on the 31st floor of Central Place Tower in Rosslyn, just across the street from the Rosslyn Metro Station.

For the price of a ticket, you can get an incredible 360* views to see Georgetown, downtown DC, Arlington National Cemetery, Iwo Jima USMC Memorial and more. There are also interactive displays to tell you more about what you're seeing and the story behind it. Unfortunately, you can only get tickets to go into it until July 26th. After this, the space will be used only for private functions, closed off from the public. The good news is that shortly after the close it to the public, the Washington Monument will be open!

Flying into Washington DC's local airport, DCA - sometimes referred to as Reagan Airport, though no local calls it that - gets you the perk of getting a great aerial view of the city.

Where to sit on the plane to view DC:

It all depends on the wind, so we cannot guarantee this advice will work, but the majority of landings come in from the same direction. Just remember, as soon as they announce descent into Washington, DC make sure you keep your nose to the window for the chance of a great view!

Canden is a historian and tour guide in Washington DC with 4 published books about the city. She has written for HuffPost Travel and has been featured in the Washington Post, WTOP, and numerous other DC papers. She's also been interviewed by the BBC, NPR, Travel Channel and Discovery Family Channel. Canden is the producer of our podcast, Tour Guide Tell All With a M.A. in History from University College London and a B.A. in History from Elon University, she is an authority on D.C. history, and has led tours in the city for over 10 years. She currently resides in DC, but has also lived in London and South Korea, and has travelled to 28 countries. Her two children (both under the age of 4) have their passports and own frequent flier accounts.
Updated: March 25th, 2022