Things to Do in Belém

This post lists the top 15 things to do in Belém, a beautiful district on the Tagus River to the west of central Lisbon. It’s written in a self-guided tour format.

It is essential to visit if you want to learn about the Portuguese Age of Discovery, see most of the city’s UNESCO World Heritage Sites, or try the nation’s favorite pastry in the place it was invented.

PLAN YOUR VISIT TO BELÉM

Belém is worth visiting and offers something for every visitor, whether you’re a history buff, photographer, or foodie.

You’ll find multiple monuments that are both beautiful and full of history, as well as peaceful gardens, and a great view of the Tagus River.

We suggest spending at least half a day in the district, especially if you follow the walking tour laid out below.

Everything listed here is part of Day 3 of our 3-day Lisbon itinerary.

Getting Here from Lisbon’s City Centre

If you’re starting in Lisbon, you’ll need to travel west for a bit to get to Belém. The trip should take between 35-45 minutes depending on where you start from.

Our list of 14 things to see is written as a self-guided tour and starts from the Garden of Alfonso de Albuquerque (map).

This is a good starting point for your visit, as it is near the main train station and also near stops for all trams and buses.

You could also join one of the many free walking tours that travel to Belém from the city centre. Most start from here as well.

Here are a few of your options.

NOTE: If you purchase the Lisboa Card ahead of time, a travel pass for public transport is included!

Take tram 15 or 127 from Figueira Square or Comercio Square (toward Algés) until you pass the Monastery.

The hop-on-hop-off bus is a great way to get the most of your trip from the city centre to Belém. Here are the routes that will get you there:

If you’re taking public transport, you can hop on Bus 728 from Sul E Sueste heading towards Estação Fluvial De Belém.

If you want to get to Belém fast, take the train for 7 minutes from Cais do Sodre Station to Belém. It’s just 3 stops!

You might want to take a few minutes to look around Belém’s beautiful train station, too.

There is a ferry terminal in Belém that you can reach from Cais do Sodré, Porto Brandão, or Trafaria.

The Yellow Boat Tour is an easy way to get from Cais do Sodré under the 25 de Abril bridge to the neighborhood.

THINGS TO SEE IN BELÉM

Here is an interactive map, and below are some instructions to get you started!

The walk includes 14 stops and plenty of opportunities to find a spot to rest or a bite to eat. You can click on the map below to expand it or download it to Google Maps.

TIP: If you prefer having an entertaining guide, there are multiple daily pay-what-you-like tours of Belém that you can book.

The beginning of the Belém tour starts at the Alfonso de Albuquerque Garden. These well-landscaped gardens were originally built to pay tribute to Alfonso de Albuquerque, who was the Portuguese Vice-King of India.

There are open grassy spaces, footpaths with benches covered in shade.

To reach the National Coach Museum, or Museu dos Coches, look east from the garden and you’ll see it across the street.

This beautiful museum’s lavish interior is full of one of the largest collections of historical carriages in the world.

They include coaches, sedan chairs, and carriages that were all built and decorated for royalty with all of the beautiful styles you’d expect.

TIP: This museum is free with the Lisboa Card!

Walk back toward the Garden of Alfonso de Albuquerque. The Palace is on the opposite side of R. de Belém.

The President of the Portuguese Republic keeps the Belém Palace as an official residence.

There is a small museum that is open to the public and holds portraits of past and current Presidents, as well as a landscaped garden.

After exiting the Palace museum, turn right and continue walking west. Pastéis de Belém will be on your right.

You won’t miss it – the name is laid right into the pavement outside!

This famous patisserie has been operating since 1837. They are the home of Portugal’s favorite custard cream tart!

Traditionally this pastry, called Pastéis de Nata, is sprinkled with cinnamon before eating them warm.

The cinnamon tradition is thanks to Vasco da Gama’s successful trade voyage to India for spices.

TIP: Why not order your pastries to take away to the next stop and enjoy them in a relaxing garden?

Take a right as you leave the cafe and another right immediately on Tv. Galinheiras and take the last left.

Just as the name says, the Tropical Botanical Garden is full of over 500 species of tropical plants and animals, including turtles, parakeets, herons, and others. Its original purpose was to give students a place to study for their veterinary and crop production courses.

Now, it is a relaxing oasis!

Walk west on Largo dos Jeronimos, then turn left to stay on that road. Turn right onto Praça do Império.

The Hieronymites Monastery is where the Order of Saint Jerome was based, in the year 1601. The monks gave guidance to sailors, and you’ll find maritime imagery throughout the building.

It is a World Heritage UNESCO site famous for the Portuguese Gothic architecture.

If you’re looking for a place to take striking Instagram pictures, this is it.

TIP: Admission is free with the Lisboa Card.

If you’re in the Monastery, head to the west wing.

The Maritime Museum commemorates Portugal’s history of navigation and discovery, run by the Navy.

King Luis I began collecting Portuguese maritime items in 1863. The collection continued to grow until the museum was given its official current home in 1963. 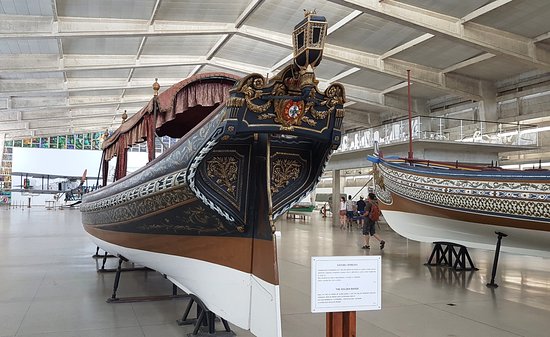 There’s even a globe from the most famous globe-maker in the world.

TIP: Save 33% on admission with the Lisboa Card.

The planetarium is also inside the Monastery complex.

They have 32 star-projectors that can display over 9,000 stars, as well as the galaxy.

You can also check out aviation- and space-related exhibits, paintings, and artifacts in the gallery.

TIP: Save 50% on admission with the Lisboa Card.

Turn right on Praça do Império then left to stay on that road.

If you’re a fan of modern art and want to see the work of Portuguese artists, you should stop by. They also regularly host film screenings, musical performances, and artist talks.

TIP: Admission is 20% off with the Lisboa Card.

It’s time to walk back toward the Tagus River.

Padrão dos Descobrimentos is literally translated to Monument of the Discoveries.

It sits on the north bank of the Tagus River, close to where it opens into the Atlantic Ocean where ships would leave on trade routes with India and Asia or for exploration.

The original commemoration of the Portuguese Age of Discovery was constructed for the 1940 World Exhibition. A permanent monument was not completed until 1960.

The main figure depicted on the monument is Henry the Navigator, with 33 other maritime statues behind him on the ramps.

There are two interior rooms you can access in the monument as well.

Walk west and follow the road as it curves right.

The Museu de Arte Popular, in Portuguese, was originally formed for the 1940 World Exhibition, but permanently opened in its current location in 1948.

They display and celebrate paintings, sculptures, and architecture by Portuguese creators.

You’ll pass the lighthouse as you keep walking west on the waterfront pedestrian road.

The Belém Lighthouse is an interesting reconstruction made from distinctive red brick in a spiral pattern. This particular lighthouse has never been in use.

Take the next right, then turn left on Av. Brasilia, and left again to head back toward the waterfront. 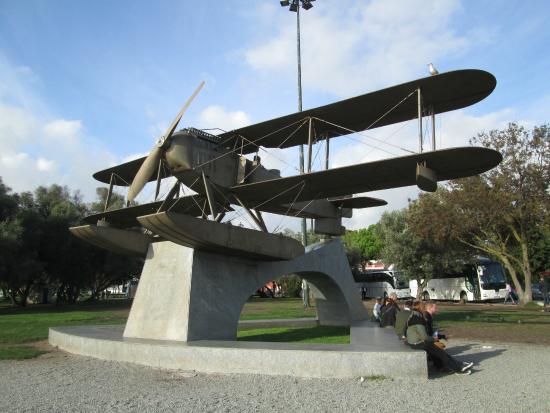 This statue of a biplane commemorates Gago Coutinho and Sacadura Cabral, both pioneers of Portuguese aviation who were the first to fly over the South Atlantic.

Their 79-day journey went from Lisbon to Rio de Janeiro in 1922.

The statue is a replica of the Santa Cruz plane to scale and is placed in the park that was the original runway.

You can see Belém Tower west of the monument!

Officially named the Tower of Saint Vincent, the Belém Tower was originally built in the 16th century as a defensive structure.

Later it became a ceremonial gateway to the city. Explorers and trading sailors would arrive to and leave from the tower, watched over by the patrons who funded their voyage, often members of the royal family.

TIP: Included for free with the Lisboa Card. We also suggest arriving before noon if you don’t want to wait in line.

If you’d rather have a guide on your tour through Belém, we know some great guided walks available to take.

If you’re on a budget, there are several pay-what-you-like tours in Belém! They’ll take you to all the major sites and include some entertaining anecdotes from the local guides.

For something a little different, there are other ways to get around the district! Popular tours include bike tours and segway rides.

Above, we have listed the landmarks and attractions that are included for free or at a discount on the Lisboa discount card. There are also guided tours of the district and Lisbon at large.

If you’re looking to take guided tours or see more than one museum and historic site, check out our Lisboa Card post that explains all the perks.

Alternatively, if you just purchase a hop-on-hop-off bus tour, that gives you a great way to navigate between districts and see more with less time.