This post covers the best things to do in Chicago this June, including a top 10 list as well as a family-friendly, nighttime activities, and free things to do, all updated for 2020.

THE TOP 10 EVENTS AND THINGS TO DO IN JUNE

If you’re looking for the best things to do in June, take a look at our suggestions for the best activities here, which include sports, theatre, and festivals.

And for ideas on some of Chicago’s most popular tourist activities, check out the following post:

Some of the things we’ve listed here are included in one of the available tourist attraction discount passes.

END_OF_DOCUMENT_TOKEN_TO_BE_REPLACED

Chicago loves any reason (or excuse) to celebrate but St. Patrick’s Day (March 17th) is one of the most festive opportunities to clink glasses.  Although Chicago already had many Irish residents, the great famine in Ireland really boosted the size of the Irish community.  Even in the last five years, Irish was still estimated as the top ancestry in Chicago, followed by German and Polish.  So, if you are in Chicago during March and want to have a wee bit ‘o’ fun, check out the St. Patrick’s Day traditions below!

The Chicago St. Patrick’s Day Parade & River dying has been cancelled for 2020

Guess what?  Chicago actually has TWO St. Patrick’s Day parades!  TWICE the celebrating!  Both of these parades are fun, festive, and FULL of Irish things.  Look out for bagpipers, Irish dancers, and shamrocks.  Plus, they are on different days so you really could go to both.  So, time to dig out your kilt or don your green!

The downtown parade is always the Saturday BEFORE St. Patty’s Day (unless March 17th falls on a Saturday, of course).  The parade is at noon- Rain or Shine!  The parade starts at Balbo and Columbus and continues north to Monroe.

The south side parade  is typically the Sunday BEFORE St. Patty’s Day.  It starts at noon- Rain or Shine!  The parade route starts at Western and 103rd Street and continues south on Western.

Tip: Parking will be challenging and pricey.  If you must drive try bestparking.com or the app “Spot Hero” for finding the best value.  Otherwise, I recommend using public transportation.

Yup, you read that right.  Chicago actually DYES the Chicago River a bright, festive green in celebration!  Although the river tends to have a green tint to it on most days, St. Patrick’s Day is especially green.  This dates back 50 years.  The emerald green only lasts about 5 hours so be sure to catch it!  It will be dyed at 9:30am.  And don’t worry- it is eco-friendly or shall we say GREEN?

Best viewing spots: Along the banks of the Chicago Riverwalk between Michigan and Columbus.

There are a lot of delicious pubs in Chicago and of course, plenty of beer.  (Watch for green beer- A Kitschy but fun).  These pubs will most certainly be crowded.  Big time.  But as we mentioned before they will also have delicious food and beer.  You decide.  Some downtown favorites include:

If you want to avoid the crowds and still feel festive, you can always pop into McDonald’s for a Shamrock Shake!  It is not actually an Irish restaurant as the name suggests.  However, McDonald’s WAS originally opened in California by two Irish brothers before being bought by Ray Kroc.  Plus, the original Shamrock Shake has a pretty touching story.

Fun Fact:  Chicagoland is where the FIRST McDonald’s (as we know it today) was built and McDonald’s corporate headquarters are still here.

This post covers the best things to do in Chicago this May, including, free, family-friendly, as well as nighttime activities, all updated for 2020.

TOP 10 THINGS TO DO IN CHICAGO IN MAY

Chicago is in full bloom in May!  It is a great time to visit as summer is just around the corner.

Check out the suggestions below for a variety of activities, including sports, theatre, music, and lots of indoor activities to stay warm !

For some of the more popular things to do in Chicago, read the following posts:

END_OF_DOCUMENT_TOKEN_TO_BE_REPLACED

Don’t forget, Memorial Day is a bank holiday in Chicago.  Banks, the public library, and post-offices will all be closed.  Many businesses will also close for the day, so be prepared!

For more ideas on popular things to do in Chicago, check out our posts on bus tours and walking tours of the city.

We also have a full guide on Things to Do in Chicago. END_OF_DOCUMENT_TOKEN_TO_BE_REPLACED

This post provides details about the best segway tours in Chicago, including details about which sites or subjects are covered and any requirements you may need to consider before purchasing tickets. END_OF_DOCUMENT_TOKEN_TO_BE_REPLACED

Hostels are a great option for budget travelers since they offer clean and friendly accommodation with a much cheaper price tag. Here we have listed the best hostels to book in Chicago.

There’s a hostel for almost every type of traveler. Most host a variety of fun activities throughout the week and feature abundant common space, so it’s very easy to meet new people, whether or not you’re traveling solo.

Most of the prices range from $18 to $80 per night for dorm-style accommodations, though during the busy season the prices can jump up to $200.

For private rooms, you’ll most likely find something in the $50 0 $75 range, though again prices can jump up to $300 per night in busy times.

Double-check with the hostel of your choice to see which amenities are included with your nightly rate and which might be extras.

The Chicago Gateway Hostel is nicely situated in Lincoln Park with easy access to the Red and Brown Lines. The clean and chic appearance makes it appealing to guests of all ages.

In fact, it is in the perfect location to join our Lincoln Park & Gangster Tour!

There are weekly BBQs, pub crawls, and bike tours offered through the hostel as well.

Continental breakfast is provided, as is access to their kitchen, which helps to keep costs down.

Interested in staying in the heart of Greektown with a lot of great food options?

The Chicago Parthenon Hostel is a family-run business in Greektown that offers guests the opportunity to stay in a lively location at a low cost.

Shared dorm rooms run around $40 and single private rooms are low as $75, though the price of both varies depending on the season. 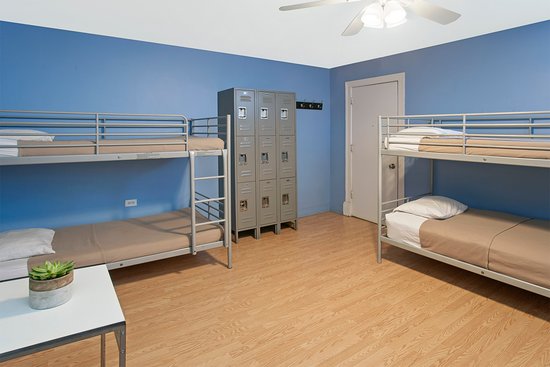 This photo of The Chicago Parthenon Hostel is courtesy of Tripadvisor

The Chicago Parthenon is the West Loop area which is known for the Chicago food and bar scene. Be sure to indulge in some of Chicago’s James Beard Award-winning restaurants.

This an upscale hostel located in Chicago’s Wicker Park neighborhood right off the CTA Blue Line.

It’s the new world of hostels. With a trendy vibe and a wide selection of room types, it’s more than a hostel. Stay in private rooms or shared gender-separated dorm rooms.

Wicker Park is home to awesome nightlife (including the first Taco Bell to serve alcohol), restaurants, bars, and shopping.

If you want to head downtown it’s only a stop away on the Blue Line – which is only one block away.

Free breakfast and WiFi are included for guests. There’s a restaurant in the hostel that serves delicious empanadas as well as beer, wine, coffee, and espresso.

Wrigley Hostel boasts one of the best locations for baseball and bar lovers in Chicago as it is right in the heart of Wrigleyville.

Visit in the summer to really appreciate the game-day spirit in the neighborhood.

The historic 1929 Music Box Theatre that hosts foreign and independent films is only a short walk away.

This hostel is conveniently located near the CTA Redline Station which can take you into downtown.

The price of a bed in a shared dorm starts at just $20 per night, though they also have private rooms for as low as $60 per night.

If you are interested in staying in the Loop in downtown Chicago, check out HI Chicago.

This hostel is in the heart of downtown and close to the Art Institute, Museum Campus, Buckingham Fountain, and Millennium Park.

It is also only two blocks from our Haunting History and Ghost Tour as well as a short walk from the beginning of the Birth of the Skyscraper – Architecture Tour.

Prices are as low as $23 per night for a dorm and private rooms start at $71. All prices include a breakfast buffet, sheets, and a towel.

The Chicago Theatre is an original movie palace from the 1920s that now serves as a Landmark for Chicago’s hottest ticketed live events.

Patrons come from all over the world to see performances, but did you know that you can explore the theatre, and even go backstage without being a groupie? END_OF_DOCUMENT_TOKEN_TO_BE_REPLACED

Many of our guests who travel great distances to join us have trouble adjusting to the time difference in their destination city. Here are some tips on how to avoid the dreaded “jet lag”.

END_OF_DOCUMENT_TOKEN_TO_BE_REPLACED

This post covers the best things to do in Chicago this April, including, free, family-friendly, as well as nighttime activities, all updated for 2020.