This post is a free, self-guided tour of Edinburgh, along with a map and route, put together by local tour guides for Free Tours by Foot.

You can expect to walk nearly 2 miles or just over 3.2 kilometres.

Below is the abridged version. You can get the full version with directions by downloading this map, PDF version, or downloading our audio tour (see below). END_OF_DOCUMENT_TOKEN_TO_BE_REPLACED

This post is a free, self-guided tour of Harry Potter sights in Edinburgh, along with a map and route, put together by Free Tours by Foot’s resident Muggle, Margaret.

You can expect to walk nearly 2.2 miles or just over 3.6 kilometres. The tour will last, on average, just under 90 minutes. Although this may change depending on your walking pace or stops you wish to make along the way.

You can use the map or this (PDF) to get the written directions.

You might also be interested in a free Harry Potter tour with a live guide. It takes place most days of the week at 13:30 (1:30 pm).

We also offer an audio tour of Harry Potter sights in Edinburgh, researched, written, and recorded by one of our own tour guides.

Download our free walking tour app on (iTunes) or (Android) or wherever you get your podcasts (just search for Atlantis Audio Tours).

You will also find an audio tour that covers the history of Edinburgh.

We also offer Harry Potter tours, both guided and self-guided in London and Porto.

The Dog House is one of the few places on earth where you can drink Butterbeer. In the Harry Potter series, Butterbeer is sold at a multitude of pubs, but primarily in The Three Broomsticks and The Hog’s Head.

Although Butterbeer is consumed by adults and kids alike in the books, that the one served at The Dog House is definitely for adults only, one of the ingredients being – you guessed it – beer.

Although the Elephant Cafe usually claims the title of the “birthplace of Harry Potter” we know that Spoon played just as large a role in the creation of the legendary series. (And as an aside, it tends to be less busy than Elephant Cafe’ so this maybe a good way for you to avoid the crowds!)

In 1997 Spoon was known as Nicolson’s Cafe and it was owned by JK Rowling’s brother-in-law, Roger Moore.

At the time, Rowling didn’t have much money so she would hide out in cafes, ordering a coffee now and again as she worked on the groundbreaking first book of her Potter series, Harry Potter and the Philosopher’s Stone.

We couldn’t let you walk next to Potter Row and not mention it!

This street bears the name of the world’s favourite Wizard, and it would make sense to think that the name perhaps inspired JK Rowling when she was naming her main character.

However, she says it’s just a coincidence. When giving her first-ever interview in America in 1999, JK was asked about the name of her hero and how she chose it.

Her reply was, “…he had several different surnames before I chose Potter. Potter was the name of a brother and sister who I played with when I was very young.”

Originally built in 1628, George Heriot’s school was opened as an orphanage and hospital for boys and today is a co-ed primary and secondary school.

You’ll notice the four grand towers that top the building, which many said were the inspiration for the towers atop Hogwarts Castle. The school also has four houses that students are divided into and they all do, in fact, compete for a house cup!

The school is easily visible from the locations Rowling used to write in and walk along so it’s very easy to see why, for so many years, Potter buffs believed this building to be the inspiration for her wizarding school.

This is just like regular chess except the pieces are enchanted and can be directed like troops – they also literally knock each other down when taking a square! It would seem that when Rowling was creating Wizard Chess, she was also thinking of the Lewis Chessmen.

This is a group of distinctive 12th-century chess pieces that were discovered in a hoard on Lewis in the Outer Hebrides of Scotland in 1831.

Eleven of the over ninety chess pieces are held at the National Museum of Scotland and are viewable to the public.

This unassuming cafe is a destination for thousands of Harry Potter fans every year – as well as fans of Ian Rankin and Alexander McCall-Smith who were well-known patrons. 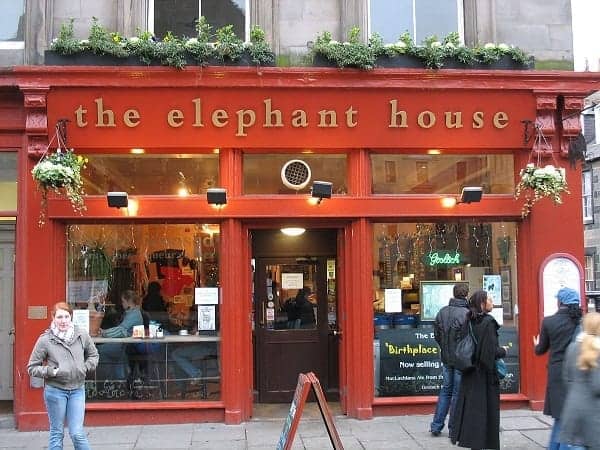 You’ll notice a sign on the Cafe which erroneously claims that this is the “birthplace” of Harry Potter.

Rowling herself addressed this sign and is quoted as saying, “I’d been writing Potter for several years before I ever set foot in this cafe, so it’s not the birthplace, but I *did* write in there so we’ll let them off!”

Also, make sure to take a trip to the loo! The walls are absolutely covered in Harry Potter graffiti with messages and drawings left by fans who have traveled from all over the world to come here.

You are now standing outside the iconic – and haunted – Greyfriar’s Kirk – kirk being a Scottish word for church.

The name Greyfriars is in reference to the Franciscan friary which previously stood here, whose friars wore grey habits. As the kirkyard is not far from the cafes JK Rowling used to frequent, she would occasionally walk through the rows for inspiration.

Here you will find the tombs of Thomas Riddell (NOTE SPELLING), who lent his name to that of the Dark Lord Himself. You will also find William McGonagall a poet who shares a surname with the head of Gryffindor House and a Mrs. Elizabeth Moodie who perhaps gave her name to a certain Mad-Eyed Professor.

The kirkyard is almost always open to the public, as is the church from April to October for tourism and year-round for services.

To get to the graves we mentioned above, simply walk straight past the church, along the left of the building.

You will find them in the back towards the right, behind the remains of the old Flodden Wall, the remains of a 16th-century wall that surrounded the city.

Known by some locals as ‘Diagon House,’ Museum Context is a (VICTORIA ST) fascinating shop, spread over two stone vaults and looks exactly like the Diagon Alley shops as depicted in the Harry Potter films. Absolutely every inch of the place is covered in interesting and quirky treasures to take home.

Given that Victoria Street is heavily associated with Diagon Alley, it makes sense to find such a treasure trove of Potter memorabilia in this location.

Make sure to hit the top floor where you’ll find a wizarding desk with a hat that you can wear to snap a selfie while you’re visiting!

So as far as we are concerned, this is Diagon Alley – or Victoria Street as the case may be!

This gorgeous, curving road looks just like the twisting and topsy-turvey thoroughfare in the Harry Potter films.

All these ramshackle, colourful buildings are tucked close together, with oddly shaped windows and roofs adorning each one.

Just around the corner is Candlemaker Row, lined with cobblestones and filled with whimsical structures holding just a hint of magic.

It’s also worth pointing out the AHA HA HA along the curve of the street at No. 99 West Bow – perhaps a precursor to Fred and George’s joke shop, Weasley’s Wizard Wheezes?

The Witches Well is a small cast-iron fountain – which no longer flows – and plaque, honouring all the Scottish people who were burned at the stake for witchcraft between the 15th and 18th centuries. Throughout the centuries, more than 4,000 alleged witches were put to death in Scotland – and a great deal of them right here.

Now get back onto Castlehill and face the Castle itself.

An imposing, sprawling structure of strength and mystic design that surges out of a great rock into the sky, it’s easy to imagine this building filled with hundreds of witches and wizards studying, playing, and living inside. In fact, Rowling commented that now,”… I’ve come to live in the shadow of what could be a lot like Hogwarts, except Hogwarts has a lake.”

So aside from the missing lake, this castle essentially showcases most of the features and details of Hogwarts that Rowling describes in her books!

As a side note, there is a canon that fires at 13:00 every day (except for Sundays) which means the Castle is very busy.

So we’d recommend coming either when the castle first opens, or in the late afternoon!

This fabulous building is called Lady Stair’s House; a faux-medieval structure designed by architect Stewart Henbest Capper in the 1890s which now houses a museum.

Edinburgh became the first UNESCO City of Literature in 2004 and this Museum shows why. One of which was dedicated to JK Rowling and included a first edition copy of Harry Potter and the Philosopher’s Stone with annotations and drawings by the author herself!

The beautiful building standing before you now holds the Edinburgh City Chambers. For the purpose of our tour, you will want to head to the quadrangle in front of the building.

Here, under your feet, you will find flagstones displaying golden handprints. These handprints are those of people who have won the Edinburgh Award – given to those who have made, “outstanding achievements and contribution to the city.”

Set up in 2007, the first winner was Ian Rankin, and the second, in 2008 was JK Rowling, whose own handprints are immortalised here.

JK Rowling began writing her iconic book series in a number of cafes, but she would write the final words of the series in one of the finest hotels in the city, Room 552 of The Balmoral Hotel. Today, the room has been re-named the JK Rowling Suite, and the room contains a marble bust of Hermes (now contained in a glass display case), scribbled with the following, written in JK’s own hand:

“JK Rowling finished writing Harry Potter and the Deathly Hallows in this room on 11th Jan 2007.”

There are 4 types of free walking tours available in Edinburgh, one of Old Town, one of the New Town, a Harry Potter-themed tour, as well as a ghost tour.

In this post, we let you know about your options, provide schedules, and explain what you will see on each tour. END_OF_DOCUMENT_TOKEN_TO_BE_REPLACED

This post provides the 21 best things to do and see in Edinburgh throughout the year.

For even more ideas, make sure to read our posts.

END_OF_DOCUMENT_TOKEN_TO_BE_REPLACED

This post covers each of the hop on hop off bus tours available in Edinburgh, providing details about locations included on each route, how to get tickets, how to save money on admission and more.

END_OF_DOCUMENT_TOKEN_TO_BE_REPLACED

This post covers each of the discount passes currently available in Edinburgh, including information about how to use them, how much money you can save, and which attractions are included.