This post is a self-guided tour of the Jewish Ghetto in Rome, including several notable sites you may want to visit in the area.

This walk is a companion to the Rick Steves's excellent audio tour of this area.

There is also a free guided walk that usually takes place on Fridays and Saturdays at 12:30 pm. The tour begins from the Ponte Fabricio, a central bridge over the Tiber River (map). It is within walking distance to many historic Rome sites.

We have 4 other self-guided tours that we hope you will consider.

Dating back to 62 BC, this bridge spans half of the Tiber River between Tiber Island and the Jewish Ghetto on the Eastern side.

Although it may come as a surprise, this is the oldest Roman bridge in the entire city. In earlier times, this bridge was actually known as the Jew’s Bridge, and that was because Jews who lived in Trastevere would use this bridge to get into town.

There is an inscription in Latin above one of the arches on the bridge which states that Lucius Fabricius, superintendent of the roads, both approved the building and took care of the bridge.

As far back as 161 BC, Jews were welcomed to the city of Rome as envoys from Judah Maccabee, and for many years they were accepted into the community.

Unfortunately, after events such as the Jewish-Roman wars, attitudes toward the Jewish community soured and some were even sold as slaves.

Although they were initially welcome in the city, there was a long period of anti-semitism in Rome from the 15th - 18th centuries.

This church, located just to the right as you cross the bridge, played a role in the darker history of Jews in Rome, as it was just one of the Catholic churches trying to spread their faith to the Jewish community.

Under the crucifix, you’ll find Hebrew script which reads “all day long, I have stretched out my hands to a disobedient and faithless nation that has lost its way.”

This is a quote from the Jewish prophet Isaiah, intentionally misused to send the message to Jews that they were betraying their faith.

This was the location where all major Jewish activities took place during the period when Jews were forced to live in the ghetto.

After the ghetto was closed, there was an opportunity made available to build a new synagogue in a better location, but the Jewish community chose to rebuild on the site of the former synagogue. In other words, although the current building was constructed between 1870-1904, this is the original site where the synagogue has existed for centuries.

Today, the synagogue has a museum, and tickets grant you access to both the museum and a tour of the building. Tickets are €11 for general admission and €5 for students.

Children under 10, journalists, law enforcement and disabled visitors are all granted free admission. You can get a reduced price of €8 with the Roma Pass, and they also offer this discount for anyone who has already visited either the MAXXI Museum or the Conservatory of Santa Cecilia.

Largo 16 Ottobre 1943 is a small public square that is dedicated to the moment in history when Nazi Germany occupied Rome.

Upon entering the ghetto, they threatened to take the Jews to concentration camps if they did not give them 50 kilos of gold within 24 hours. 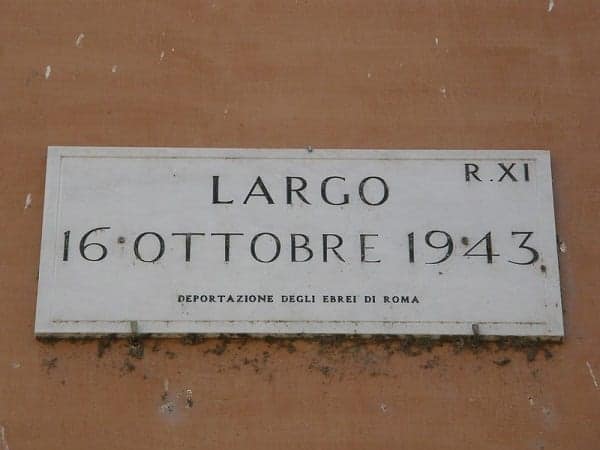 Although it was difficult to come up with the money, the community worked together to meet these demands.

Sadly, it was all for naught, as the Nazis still came back and took the Jews anyway.

October 16th, 1943 was the date when they started rounding up the Jews. 2,000 people from the ghetto were sent to concentration camps, and many would not return.

Pope John Paul II would later admit that the Catholic church should have defended the Jews, and he was the first Pope in history to enter a synagogue when he did so in an effort to reconcile with the community.

This ancient Roman ruin dates back to 27 BC, and it was built by Emperor Augustus. He named the portico after his sister Octavia. You’ll find the theatre in question just down Via del Foro Piscario to the East of Portico d’Ottavia. It’s the Teatro Marcello, and parts of its original structure built in 13 BC still remain.

After the fall of Rome, this Portico became something of a fish market, but in the 8th-century, the ruins became part of the church of Sant Angelo Pescaria.

Sadly, there was a time when this church was used to force Jewish residents to listen to Christian sermons.

This road, about a block in length, is the main street of the Jewish Ghetto.

When this was a ghetto, the street was much more narrow, and it still is toward the far end of the road.

Each side of the street tells a different story, the left side with a newer building and the right featuring the only remaining ghetto buildings.

Via del Portico d’Ottavia is lined with kosher restaurants and shops selling a variety of Judaica. Past the first block, you’ll see a large, yellow school on the left.

There is also a Jewish bakery on the right-hand side of the street across from the school.

Needless to say, this main street is a great spot to enjoy the best kosher foods in Rome!

Located in nearby Piazza Mattei, this historic fountain was originally built in the 16th century, but the famed artist Bernini would later add four bronze turtles to the top which gave the structure it’s character. If the turtles look hyper-realistic, that might be due to the fact that Bernini often used real casts of animals whenever he depicted living creatures in his work.

Located across from the school, this old bar is known mostly for its facade which features ancient marble plaques and statues.

One of the most interesting things to see here is a small slot in the wall by the door, which is a ghetto-era charity box for orphans that is still in use to this day.

If you head further down the street, you’ll eventually run into a piece of ancient marble which depicts a lion attacking a gazelle. This piece dates back to 1467.

A bit further ahead you will find a former Carmelite convent which was just another example of Christian churches trying to enforce their beliefs on the Jews.

These are just a few of the interesting sites to see in the Jewish Ghetto, but there is so much culture on display here that we recommend taking an audio tour to learn even more.

Be sure to check out our other self-guided walks of Rome, including Central Rome, Vatican City, and Colosseum + Forum areas.

Stephen is the CEO of Free Tours by Foot and has overseen the transformation of a local walking tour company into a global tour community and traveler’s advice platform. He has personally led thousands of group tours in the US and Europe, and is an expert in trip planning and sightseeing, with a focus on budget travelers. Stephen has been published and featured in dozens of publications including The Wall Street Journal, BBC, Yahoo, Washington.org, and more.
Updated: November 23rd, 2021