Free Tours by Foot offers walking tours and travel tips for your trip to Boston (and other cities). Our expert guides share their knowledge about Boston, Cambridge and more on our guided tours and offer local travel advice for the top things to do, how to get tickets, and what to do in Boston tonight. 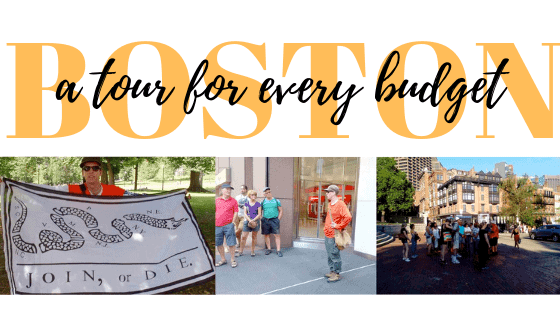 Free Tours by Foot is pleased to present the best free, self-guided and name-your-own-price guided Boston tours. These interesting and informative sightseeing city tours will take you through many of Boston’s most famous neighborhoods.

Our guided tours are led by expert city guides who can help you plan your best trip. From the best places to visit in Boston to the most fun Boston attractions. There is no charge to take our tours, meaning you may pay what you feel the tour was worth after the tour is completed. This ensures that your tour guide must strive to give his or her best on every tour.

Name-your-own-price Boston tours are tours for everybody budget and we’re one of the best things to do in Boston.

It is the epic stories of Boston’s rise and America’s birth, with tales of rebellion, war and the independence of a nation.  We’ll see sites along the historical Freedom Trail from Boston Common to Fanieul Hall on this 2 hour guided walking tour, including Granary Burying Ground, Old South Meeting House, the site of the Boston Massacre and more.

Take this tour anytime with our self guided GPS-enabled audio tour app and find out more about the Freedom Trail with our guide.

Join the North End and Little Italy Tour on our 2 hour guided tour as we stroll along Boston’s ancient streets, historic cemeteries and colonial buildings and homes. This tour includes the last sites of the Freedom Trail.

Paul Revere, the Mathers, the Fitzgeralds and Tony DeMarco are among those who lived and worked here and its streets tell the stories of struggle and triumph of its inhabitants ever since.

As Boston’s oldest neighborhood not only is it rich in history but known for its waves of immigration, fine restaurants and Italian-American population.

Cross the Charles River for our Cambridge and Harvard Tour and find out for yourself why countless numbers of America’s elite have nurtured their intellects within this city. Let us show you what’s to do and see in Cambridge.

This tour of Harvard’s campus and surrounding historic town of Cambridge is a 2 hour guided tour discussing the world’s leading universities and a diverse population with an edgy, progressive political mindset.

It’s hard to hear that Boston accent without thinking of President John F. Kennedy. Learn about his time in the city one the Kennedy and Irish History of Boston.

Join us to see Jack’s favorite haunts, the buildings where he lived and the places from which his campaigns were organized. Learn about Boston’s role in the Irish Potato Famine and the antics of the inestimable James Michael Curley.

For a darker side of Boston history on your trip, try our Beacon Hill Crime Tour.  Known for it’s swanky homes and high-class establishments, Beacon Hill also has a darker side. We will walk by crimes scene and tell the stories of the victims, and the murderers

This tour is rated R and is not recommended for guests under 16 unless they are comfortable with graphic information.

The tour follows the footsteps of the British Army and the Royal Marines up Breed’s Hill as they climb their way into history, while participating in one of the most historic battles in American History. The Battle of Bunker Hill Tour will take you on the ferry along the same route the Royal Marines sailed on in 1775 on their way to the historic Battle of Bunker Hill.

We know that sometimes our schedule doesn’t fit into yours. Here for a day trip or a short weekend in Boston? Our self-guided Boston tours allow you to see what we think are the most important places to visit in Boston on your own time.

We also offer our guiding services for private groups where we can guide you on the Freedom Trail, through Cambridge and Harvard and anywhere else in Boston.

We are also experts in the Boston region with tours to Lexington and Concord as well as Salem. Click here to learn more about our private Boston tours.

Call us or email us and we will get back to you with a timely quote.