This is our self-guided Dublin pub crawl, which shows you where to drink with the locals. One of the most popular activities for both locals and tourists in Dublin is a pub crawl. Did you know that Dublin has over 700 pubs? Sound overwhelming? We think so too. You can use this self-guided pub crawl in conjunction with our self-guided Dublin walking tour. We’ve mentioned a few historical facts about the neighborhood where each pub stands, so you can feel confident that you’re getting your culture in addition to your perfectly poured pints.

Located just south of the River Liffey, the Brazen Head is a popular hangout for just about everyone from college kids to tourists to regulars. The Vikings used this river when they arrived in Dublin in 795 AD.

Established in 1198, the Brazen Head is the oldest pub in Dublin and opened not long after the Vikings left. That being said, not a lot of the original structure is still a part of the current building. The original structure was built as a coach house and has seen a lot of celebrities in its days. James Joyce, Wolfe Tone, and Michael Collins all drank here. Today the pub is great place for a pint, to meet new friends, and to check out some live music. Established in 1780, the Stag's Head has gone through a few renovations—but nothing too major. You can still spy some of the original architectural details, which is good because the bar is known as one of the most beautiful in Dublin.

The building was redesigned in 1895 and is a great example of Victorian architecture. The latest renovations updated a few details but left the character the same. This is a great place to fill up on banger's and mash during your crawl as you sit and marvel at the building.

And yes, there is a stag's head hung behind the bar.

If you want to sneak a tourist site into your visit to the Stag Head, head over to the nearby statue of Molly Malone on Church Street. She was the mythical subject of the famous song of the same name.

You've now entered the part of town referred to as Temple Bar. Not to be confused with the bar named Temple Bar

Built in 1823, Palace isn’t the oldest bar in Dublin, but it is the oldest bar that’s still maintained its original structure. The Palace is a great place to meet friends or get a little writing done—it’s actually known as a writer’s haven.

Decorated in Victorian-era details, the bar itself is made of a rich mahogany. Small “booths” ensure privacy from nosy bar mates. During World War II, the bar was the unofficial hangout of newsmen since “The Irish Times” offices are just around the corner.

Palace is a hop, skip, and a jump from the former Irish Houses of Parliament, built in 1803 as the first purpose built two-chamber parliament house in the world.

Mulligan's may not have hosted as many celebrities as the other bars on our list, but it has seen at least two major celebrities since it opened in 1854: James Joyce and John F. Kennedy.

Yet the famous patrons are the least interesting part of Mulligans. This place is full of strange stories and curious details. Allegedly a US tourist’s ashes were interred in the building’s clock. Perhaps a warning to tourists not to get too rowdy? Or perhaps it’s an honest homage to a favorite Dublin haunt?

Plus, the quality of the Guinness served here is supposed to be phenomenal. There’s only one way to find out… 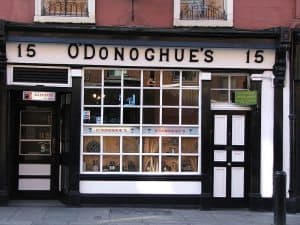 O’Donoghue’s has the best of both worlds. Not only is it a traditional Irish pub where you can check out live music, it doubles as an inn as well.

This popular hangout tends to get packed on the weekends, so arrive early to claim your spot. If you’ve ever heard of the band The Dubliners, you’ll want to head to O’Donoghue’s while in Ireland; this is where they got their start, so they still pay homage to their favorite pub by playing a few songs every now and then.
In addition to fiddles, you might also hear tin whistles and the uilleann pipes

Hopefully you’re not tired of historic Irish pubs by now. We’ve got a few more to hit! This one opened in 1818 and still has a bunch of memorabilia on display.

Though every bar in Dublin tries to claim theirs is the best pint of Guinness, it doesn’t hurt to give Toner’s a try. They even won the title “Best Pub in Dublin” back in 2015. They also won “Snug of the Year” back in 2010. No, a snug isn’t a super cool Irish drink; it’s a private nook where you can quietly chat with friends.

In case you need another reason to stop by, this is allegedly one of poet WB Yeats’ old hangouts.

Grogan’s Castle lounge for a toastie and another pint. Grogan’s was another famous writer’s haunt and was even mentioned in Flann O’Brien’s. At-Swim-Two-Bird the walls are covered with local art. If you’re feeling that you need a little sustenance, order the grilled ham and cheese.

Another writer’s hangout, Davy Byrnes made its way into James Joyce’s Ulysses. It was here that the main character, Leopold Bloom, eats a gorgonzola sandwich and drinks a glass of burgundy—though you can’t really get that today. Yet you can get a pretty darn good fish and chips here.

Davy Byrnes is a little more upscale than most of the spots on our list. It’s known for an art nouveau celling and plush velour bar stools. If you’re craving a gastropub, this is the spot for you.

The last bar on our list isn’t your traditional dark Irish pub. All of the flags of nations in the EU hang down from the ceiling. Members of the group Thin Lizzy used to hang out here in the 1970s. The bar has also seen the likes of celebrities such as John Denver, Michael Flatley, James Belushi, 50 Cent, and members of Iron Maiden and Snow Patrol.

It’s known for attracting nearly every type of person in Ireland, from mod 20-somethings to old punk rockers to well-dressed men in business suits.

The bar sits adjacent to Grafton Street, known for its trendy shopping and street performers by day.

We hope you enjoyed our self-guided tour of some of Dublin’s famous pubs. Check out our article on Dublin pub crawls if you want to get even more immersed in the Dublin pub scene.

Stephen is the CEO of Free Tours by Foot and has overseen the transformation of a local walking tour company into a global tour community and traveler’s advice platform. He has personally led thousands of group tours in the US and Europe, and is an expert in trip planning and sightseeing, with a focus on budget travelers. Stephen has been published and featured in dozens of publications including The Wall Street Journal, BBC, Yahoo, Washington.org, and more.
Updated: October 12th, 2021