Where to Eat the Best Meat Pies in London

When it comes to British cuisine, fish & chips are at the top of the list, but coming in a very strong second-place is a traditional British pie!

In this post, we list the top places in London where you can eat meat pies and mash. 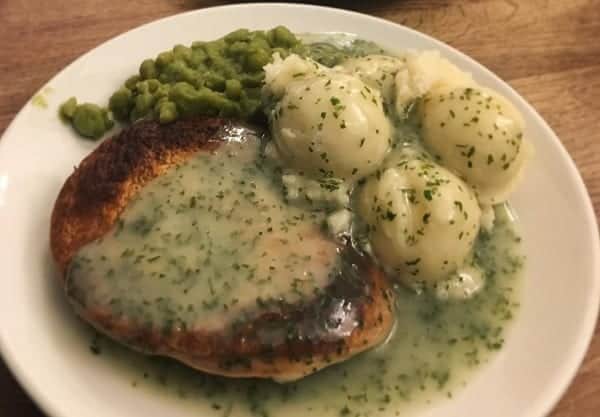 It's not a pizza or a sweet pastry or cake, it's a baked dish filled with savoury meat or vegetables covered in dough or mashed potatoes.

Learn more about eating in London on our London food tours page and read our Guide to London on a Budget for more tips on how to save money while here. 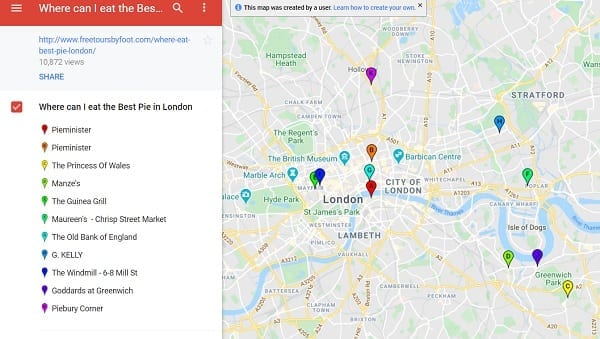 Beginning life in Bristol, Pieminister burst onto the London cuisine scene with their award-winning pies around 2006.

Their pies are so good they were sold at Harrods and Harvey Nichols…and were even served at the Queen’s Christmas Party!

Now dotted all over town, Pieminister is the top dog in a list of tough pie-contenders.

The Princess of Wales

This relatively unassuming pub serves up some of the best pies in town.

Located in easy distance of the West End and the River Thames, the Princess of Wales dishes up some of the largest plates of pie and mash you’ll find in town.

A perfect stop for lunch on our All In One Tour!

More than a pie shop, Manze’s is a London institution. The Manze family has been dishing up pies since 1902 and now has three branches in the capital.

The same recipes, handed down generation to generation mean that the pies here are some of the best, and most authentic, in London.

Posh pies are what The Guinea is all about.

Located in the exclusive and expensive Mayfair area, the Guinea sits on a site that has been occupied by a pub since the 15th century!

Award-winning pies are served up containing, or alongside some of the best British beef located in town.

Although Maureen may no longer work here, her son Jason is keeping his mum’s delicious legacy well and truly alive.

The pies made here are so good that they are shipped out daily throughout the United Kingdom and even internationally to Spain, Italy, and South Africa!

Luckily for Londoners, we need only head to the East End (the traditional home of pie & mash) to enjoy these delicious little delights.

The Old Bank of England

Picking up on the legend of Sweeny Todd – “The Demon Barber of Fleet Street” – this Fleet Street locale offers up classic British pies…with no surprise ingredients:)

A great location before/after our City Tour, The Old Bank of England is a beautiful Victorian pub that is worth visiting even when not on the hunt for a pie.

Dishing up pies since 1937, G. Kelly’s pies are all hand made using a decades-old recipe.

Everything here is baked in house and the surroundings are charmingly art deco.

In addition to traditional pies, eels are also on the menu here. And for the vegans among you – there are pies here for you, too!

Check out this video of our guided East London Food Tour

This Mayfair hot spot is so good at pies, it actually has a pie club boasting thousands of members!

Award-winning steak pies, standard favourites like fish pies, vegetarian options and constantly changing seasonal pies means that The Windmill has something for everyone.

Tradition is the name of the game at Goddard’s, dishing up pie and mash based on original recipes from the 18th century.

In addition to the impressive list of pies on offer, Goddard’s also serves traditional east London cuisine such as jellied and stewed eels for those who are up for something a bit different!

Holloway Road, a northern primarily-residential area of London, is not normally regarded as a foodie’s destination. But Piebury Corner is changing all of that!

Beginning by serving home-made pies to hungry football fans heading to the nearby Emirates Stadium to see the Arsenal football matches, today guests can still buy pies from their stall on match days, but can also enjoy their pies at their new premises.

Their menu is vast with traditional and vegetarian pies, delicious side options, and a choice of gravies. This is definitely one that caters to the picky eaters you may know!

+++Work up an appetite on one of our many walking tours of London!+++

An American simply by accident of birth, Margaret moved to London over 16 years ago and hasn’t looked back since! With a keen interest in History – and a BA degree to match – Margaret prides herself on her knowledge of the amazing city she calls home and she's been guiding here now for nearly a decade. Social history is her real expertise, with sound understanding of the day-to-day lives of Londoners over the past centuries.
Updated: April 7th, 2022