Which is the Best Philly Cheesesteak?

This post compares some of the most popular Philly cheesesteaks to determine which one is the best. We’ll also include information about how to order and the history of this delicious sandwich!

These two cheesesteak restaurants are natural competitors, as they are located right across the street from one another.

They also have a place in the history of this beloved sandwich!

Thankfully, this isn’t about who made the Philly cheesesteak, it’s about who does it best.

Both Geno’s and Pat’s are frequently rated quite highly and considered some of the best places to eat in the city.

Both restaurants are open 24/7, and they offer a similar quality of bread, meat, and cheese. With that in mind, let’s break down some of the best things about each location:

Ultimately, these two Philly cheesesteak shops are so similar that it will be up to you to decide which one you like best.

Although some people will argue that the meat is blander at Geno’s or the onions aren’t grilled enough at Pat’s, the biggest difference of note is the atmosphere at each location and the speed of service.

While Pat’s is arguably a little faster than Geno’s, they also want to get you in and out quickly and they don’t spend much time on the presentation of the food.

If you’re looking for a flashier service, Geno’s isn’t always as fast, but they always make sure to wrap up their sandwiches and their storefront is always a sight to behold.

You can also purchase memorabilia from this restaurant!

For a quick Philly cheesesteak without the pomp and circumstance, head to Pat’s – but if you want more of an experience, Geno’s has got you covered.

While everybody knows about the rivalry between Geno’s and Pat’s, many Philadelphia residents suggest that these two popular restaurants aren’t even the best place to get a Philly cheesesteak.

If you’re looking for an alternative to the two most famous sandwich shops in the city, consider one of the following locations instead.

Like Geno’s and Pat’s, this classic style Philly cheesesteak frequently ranks as one of the best in the city.

Rather than chop up their meat, you can expect a finely shaved rib-eye with plenty of cheez whiz.

This is a great alternative if you’re looking for a traditional cheesesteak sandwich.

If you’d rather have a chopped steak sandwich, this restaurant is an excellent alternative to places like Pat’s.

In addition to their Philly cheesesteaks, they also serve milkshakes, ice cream sodas, and egg creams! 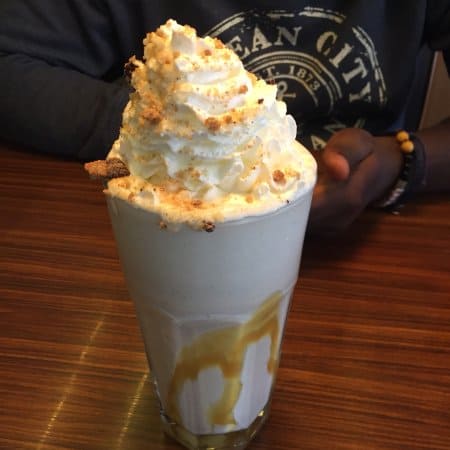 This photo of Joe's Steaks + Soda Shop is courtesy of TripAdvisor

Thanks to their treats, this could be considered a slightly more family-friendly location than some of the other shops on our list.

If you’re looking for some unique takes on the classic cheesesteak, this shop has plenty of surprisingly delicious and creative options to choose from.

If you’re in the mood for something a bit more special than the classic cheesesteak, this restaurant offers some pretty popular sandwiches with truffle-infused cheez whiz and pepper mayo.

Experience a different take on the traditional Philly cheesesteak and some fantastic house cut fries!

While some may consider it blasphemy, vegans will be happy to hear that there is a pretty amazing Philly cheesesteak for them as well.

Rather than meat, they use garlic and rosemary seared seitan, diced and grilled onions and a vegan version of cheez whiz. This sandwich is so good that even carnivores love it!

Film buffs might be familiar with this restaurant as it was made famous in the film Creed, but there are other reasons to consider stopping in at Max’s, including their full bar.

This shop is known for serving some of the biggest cheesesteaks in the city, as a half-sized order is literally 1 foot long!

This restaurant offers a different take on the classic Philly cheesesteak, with a combination of finely minced steak and large chunks of onion. While some swear by Dalessandro’s, others say it’s not authentic enough.

Regardless of whether or not it’s true to the original sandwich, this has still become one of the most popular cheesesteaks in Philadelphia.

If you’re worried about ordering your cheesesteak the right way, this restaurant is well known for accommodating all types of visitors. This photo of Sonny's Famous Steaks is courtesy of TripAdvisor

Sonny’s is also considered one of the healthiest options in Philadelphia, as they fry their Angus beef in its own juices instead of oil.

This restaurant has earned many awards for serving up some of the best cheesesteak in Philadelphia. The meat for each sandwich is grilled to order and they use a seeded roll that fans consider to be the best in the city. 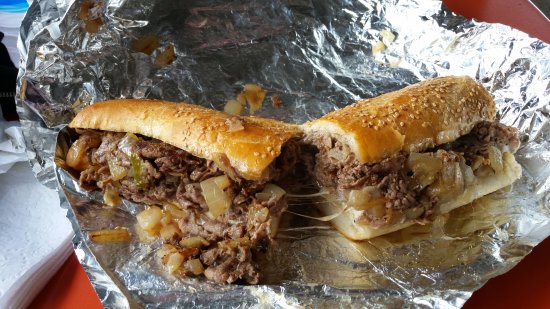 This photo of John's Roast Pork is courtesy of TripAdvisor

Although they didn’t start out by making Philly cheesesteaks, this location has since become well known for their take on the popular dish.

Located about 5 minutes south of the historic Pat’s & Geno’s, this shop is a bit more popular among locals and it’s another great place to pick up a classic Philly cheesesteak.

Of course, if you’re looking for something special, you can also get a pizza steak with tomatoes.

HOW TO ORDER A PHILLY CHEESESTEAK

Depending on which cheesesteak shop you visit while in Philadelphia, you might be expected to order your sandwich in a very specific way.

This is both traditional and a great method to keep lines moving and business running as smoothly as possible. Thankfully, the process is fairly simple and straightforward.

Most cheesesteak restaurants offer a few variants on the classic sandwich. You can typically choose between cheez whiz, American cheese or provolone, and you can decide whether or not to have onions.

Do not wait until you’re at the window to make up your mind. You should be thinking about what you want and have your order ready while in line.

There’s a special way that locals make their orders so they can get in and out as quickly as possible. It might sound like a foreign language at first, but we promise it’s actually easy to understand.

Next, decide if you want onions. If you do, simply say “wit.” If not, say “without.”

When you get to the window, simply combine these two words together. If you want a classic, it’s going to be “whiz wit.” Not a fan of onions? Order “whiz without.” Prefer provolone and onion? “Provolone wit.”

Hopefully, this makes a bit more sense now, and it should make your ordering experience much easier.

Oh, and remember to have your money out and ready to pay right after you order. Many shops only accept cash, so it’s best to prepare by going to the bank first.

HISTORY OF THE PHILLY CHEESESTEAK

The beginning of this epic and much-debated sandwich was born in the Italian Market, the heart of the Italian immigrant community of South Philadelphia.

The legend states that Pat Oliveri (some argue his brother Harry had a hand too) had a hot dog stand in the Market in the 1930s and one day decided he wanted to try something new.

Maybe bored of just hotdogs, he went to the local butcher, picked up some steak and cooked it up. Then he slapped the juicy meats on a sliced crusty long Italian roll.

Pat was just about to take a bite of his lunch when a taxi cab driver attracted by the wonderful smells, asked: “What’s cooking”.

Pat sold the first one for a nickel, the cabby stated he should sell these and stop with the hot dogs. Hence the birth of the Pat’s King of Steaks which relocated to 1237 East Passyunk Ave. in the 1940s. Thank you cabby!

To Wiz or not to Wiz? The Cheese part of the sandwich is where the debate sizzles. There are two legends. Pat’s states that they added Cheez Wiz, the trendy food of the day, and then onions in the 1960s.

Well, this is where the famous rivalry begins. Joe Vento of Geno’s Steaks opened his shop in 1966 across the street from Pat’s, states that he added the Cheez Wiz first.

Yes, they are across the street from each other and open 24/7 so you can weigh in on the rivalry of who is best. Both were recently featured in the GEICO Superbowl ad.