Two of the best things about Nashville are the unique pieces of street art and the great things to eat.

This Eats & Street Art Tour covers East Nashville, a hip and quirky neighborhood that is so full of street art that we only included about half.

Our hearts go out to the East Nashville community after last night's tornado. This page has not been updated to reflect what places were damaged. We will update when it is safe and reopened.

Eats & Street Art tours are self-guided walking tours that take you to some of the most popular (and some of the lesser-known) street art and murals, with food stops at local eateries, cafes, and stores.

It is a great way to experience a new neighborhood and delve into the deliciousness that feeds your soul and your belly.

Take this tour in whatever order or route you want, but our suggested route is below with information about each stop.

We went in this direction solely to end with coffee. If you make all the food stops, you will get full so start hungry!

We start at the intersection of 7th and Main Streets. The tour ends about 1 mile away, so pick a route that works best for you based on how you're getting around.

FOOD: Bolton's Spicy Chicken - 624 Main Street - Try the fried fish (or if this is your only chance to get some Nashville Hot Chicken, get that. This family recipe was passed down by the owner's uncle and it's less sticky and more breading than some other versions). The hot fish sandwich comes in a combination with fish and spice levels - (whiting, catfish, grouper, and tilapia with five-spice levels).

STREET ART: There is a mural on the four corners here.

Herb William does a lot of his artwork with crayons (he has an account with Crayola) to make crayon sculptures, and a lot of his work uses animals. You can find his miniature multicolored animals all over town. Jerry's is a discount art supply store chain. You'll find a lot of street art is commissioned by local business but one of the artists here, Hannah Holgate, is also a manager at the store! 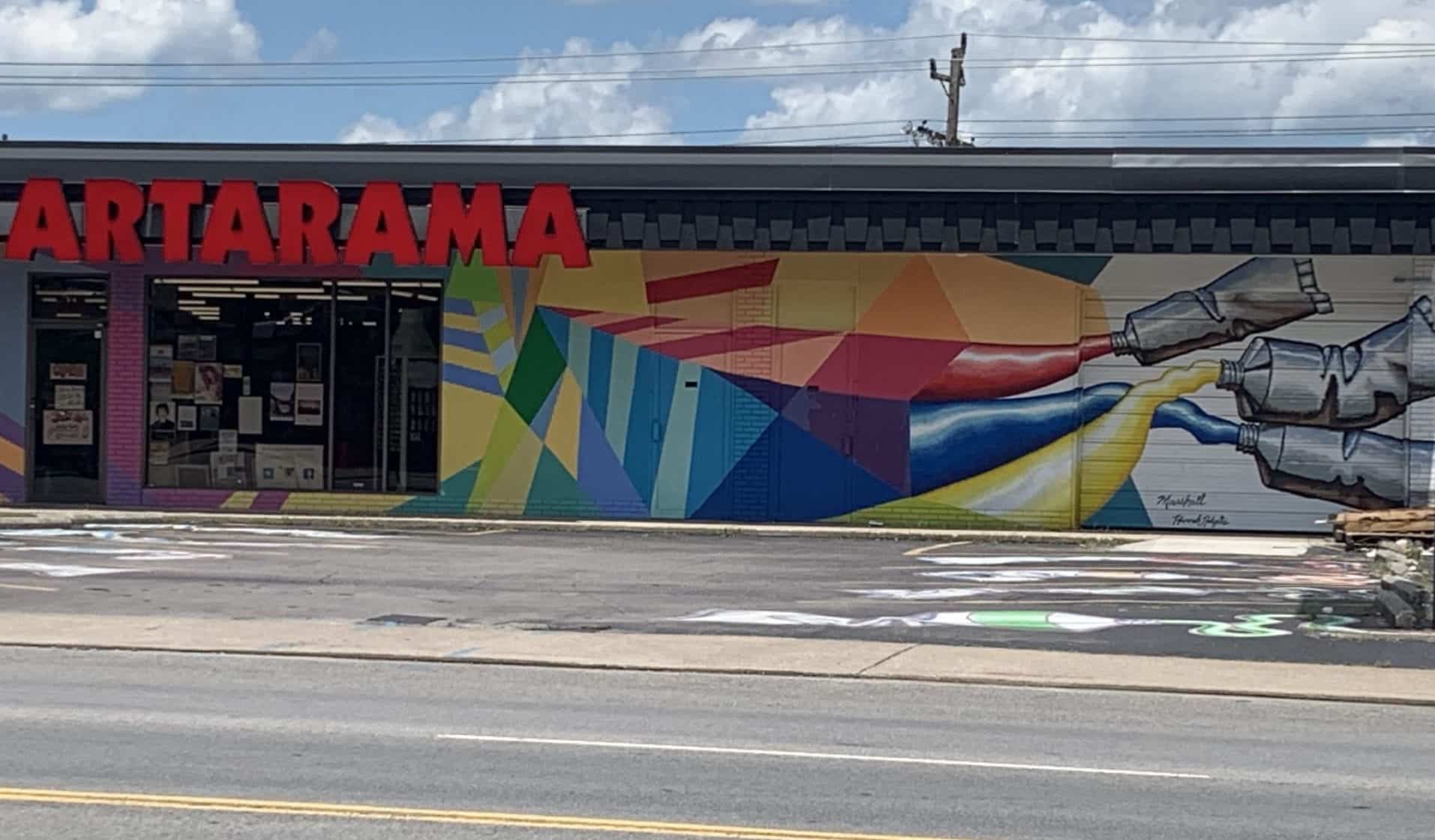 DCXV is Adrien Saporiti, the artist behind the famous I Believe in Nashville mural featured on our 12 South Eats & Street Art tour (you can also find a smaller version on the side of Basement East in a few stops). 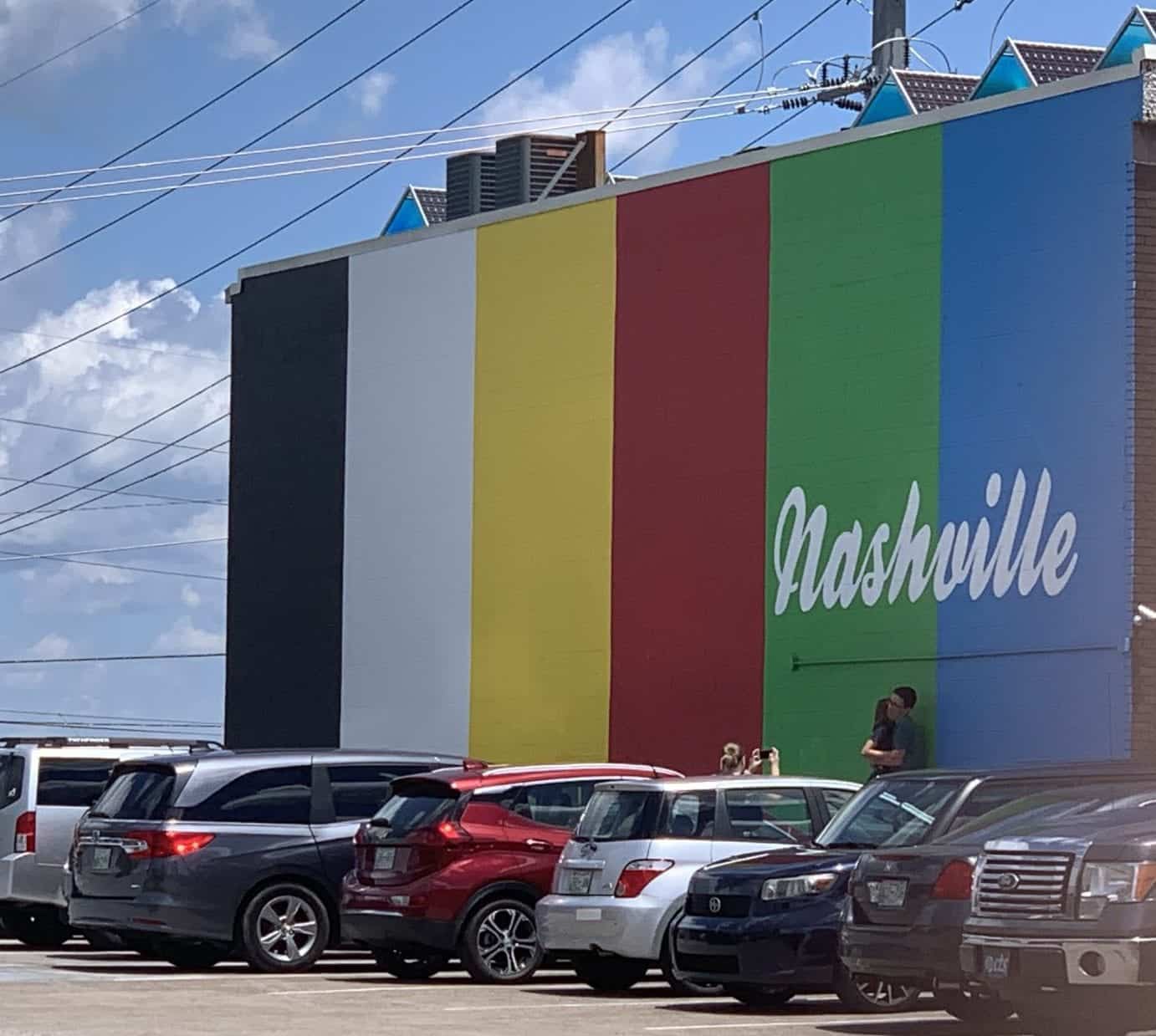 Nashville is known as Music City today but in the 19th century, the nickname was "Athens of the South" - based on the number of higher education institutions here and the replica of the Parthenon.

This mural is on the side of a Greek restaurant and the mural was commissioned before they even opened! Each letter has a different Nashville connection - the restaurant itself, the Parthenon, the Nashville skyline, the sports team, and other public art in the city. FOOD: Head to the Turnip Truck - which is actually a grocery store, but its one of the few places you can find Professor Bailey's Pimento Cheese Spread.

Grab some of that (we love the savory version) and some crackers to go. This version of the cheesy spread has less mayonnaise and more chunks. It is named after John E. Bailey, who was superintendent of music education in Nashville from 1873-1917.

FOOD: Get a kolache at Yeast Nashville - a Kolache is a Czech transplant that made it's way via Texas. The original Bohemian version is sweet, but these Tex-Czech pastries often have proteins. We suggest the sausage-chedder.

To the next stop, head left out of Yeast Nashville, munching on your kolache, and you'll see a set of stairs at the end of the building leading down to a parking lot, take this to get back to Main Street and turn right.

STREET ART: There are actually a lot of street art or grafitti on this next stretch but we want to point out four.

This mural is on the side of Weiss Liquors (which has a cool history itself. Started in the 1890s downtown, this location is from the 1960s and has an original retro sign still. The mural shows employees putting up a banner with locals (and in the photo below, our tour guide) hanging out. This second mural on the Weiss Liquors wall is by the same people and pays homage to East Nashville's Tomato Arts Festival.

One of the neighborhoods best and signature festivals celebrates the tomato every fall. The three starts resemble the Tennessee flag. This cowboy mural as well as the Crying Wolf behind it were part of the #dotheroad project - in 2017, Pabst Blue Ribbon sponsored a traveling artist project.

Ratchi is a NYC based artist with a signature style. The @tag is obscured by grass often but this is pretty obviously Ratchi - the offspring of a rat and chihuahua in the Lower East Side. Part of the same PBR project (hence all the PBR's in the artwork. You'll see a lot going on in this mural and it is the work of four artists - Kit Mizeres (travelling artist), Lauren Asta (California), Ramiro Davaro-Comas (Brooklyn), and Denton Burrows (Manhattan). FOOD: Take a break at Butcher & Bee for some tapas style table service. We recommend... literally everything. But the whipped feta, bacon wrapped dates and/or (who are we kidding - and) avocado crispy rice. They offer seasonal local fare so the menu often changes.

When you leave Butcher & Bee head right to the corner (Molly Green), then turn right on to Mcferrin Avenue.

Eastside Murals (Out East Boys) are a pair of Tennessee based artists who specialize in large scale artwork. They have a lot of work around Nashville!

If you've seen the Tomato Mural at Pomodoro East that was their first (kind of...) piece. The two friends actually grew up together using spray paint as graffiti artists. Even today their large scale projects are done with spray paint. FOOD: As you're about halfway up McFerrin Avenue, you'll see what looks like a mural of a chicken riding a motorcycle. This is actually a speakeasy called Attaboy!

Knock on the door for the host. There is no menu, but you'll be asked some questions to get a sense of what you may enjoy.

Attaboy is on an unamed alley and you'll want to walk down this (if the door to Attaboy is behind you, turn right) and then turn left on the first road at the Basement East building.

STREET ART: You'll find a number of interesting pieces here. There is another Eastside Murals work featuring cheetahs, a smaller version of the I Believe in Nashville.

You're back on Woodland St. Turn left and you'll walk a few blocks. You'll want to cross the street at some point to get to the Soda Parlor.

FOOD: Indulge in an old school soda fountain float at The Soda Parlor

Troy Duff is a East Nashville based artist whose work often can be viewed like a puzzle. You can see this arrangement of "East Nashville" in a few places. Mobe Oner (the nom de spray paint of Eric Bass) is based in Nashville. You can see similar realistic helium balloon letter street art on our London Graffiti and Street Art tour by artist Fanakapan, who pioneered this style.

These golden balloons were commissioned by the pizza company BoomBozz where it is located. Did you know that Mountain Dew was founded in Tennessee? Another Eastside Mural. And yes, "It'll tickle your innards" was a real Mountain Dew slogan in the 1960s. The Balloons and Born in Tennssee are both on S 10th St, so head back to Woodland and turn right.

This mural was a part of a Google Fiber project that brought artists to five cities across America to #MakeTheInternet brighter and more colorful!

This artwork was done by Nashville artist (who is currently based in Budapest) Nathan Brown, known for his geometric shapes. FOOD: Pop into Five Points Pizza for a slice (New York style). They have a dine in section and a counter service if you want to get a quick slice to go.

Keep going down Woodland to the next intersection - Five Points.

The Five Bears at Five Points in East Nashville is another commissioned piece. When it was being put up, not everyone in the neighborhood was thrilled by the concept.

Look at the second bear from the right and you'll see white paint dripping around his head - that was actually from an episode of vandalism. Before the mural was completed someone splashed white paint on it, but the artist Leah Tumerman left it as part of the finished piece. This one may not last long so let us know if it's gone. Bonnaroo is a festival in Nashville and there is a whole quest like, somewhat Alice in Wonderland feel to it's lead up.

People have been getting cryptic messages related to Bonnaroo for some time - a few people have even shown up at this mural in the middle of the night with blacklight flashlights looking for hidden messages (none were found). FOOD: This one might need planning and its a sit-down restaurant but worth it. The Treehouse Restaurant is a farm to table dinner in an old family home.

Seriously, the home has been in the owner's family since the 1920s and the treehouse in the backyard was built by his grandfather. The farm is about 50 miles outside the city so their menu is very seasonal.

Head up 11th to where it dead-ends with Gallatin. There is a wild mural on the pavement the intersection. Turn right on Gallatin. This is another piece of art commissioned by a business that was completed before the business even opened. Street art and murals are a big part of local Nashville. The block letters each relate to local businesses and scenes in East Nashville (see the Treehouse Restaurant in the second A!) Cross Gallatin at the crosswalk here and turn right.

Skye Walker grew up in this world, his father is a muralist, too. Terra-Drift is about Mother Earth and the interconnectedness.

This was part of his Sea2Sea Mural tour - where he lived out of a van and went on a mural painting mission. The restaurant that inspired this piece, Little Octopus, closed in early 2019. There was also a gold octopus inside but the same artist.

Tagging his work with Zidekahedron, you'll find more of his work on our Gulch tour, as well. Kelsey Montague is behind what is Nashville's most famous (and instagrammable) piece of art - the Nashville Wings - in the Gulch.

You'll almost have to wait in line at the wings, but this hidden piece in East Nashville was completely quiet when we went. There is even a real hot air balloon basket! FOOD: End the journey with a hot or iced, depending on the weather, coffee from Nashville chain, Barista Parlor.

Canden is a historian and tour guide in Washington DC with 4 published books about the city. She has written for HuffPost Travel and has been featured in the Washington Post, WTOP, and numerous other DC papers. She's also been interviewed by the BBC, NPR, Travel Channel and Discovery Family Channel. Canden is the producer of our podcast, Tour Guide Tell All With a M.A. in History from University College London and a B.A. in History from Elon University, she is an authority on D.C. history, and has led tours in the city for over 10 years. She currently resides in DC, but has also lived in London and South Korea, and has travelled to 28 countries. Her two children (both under the age of 4) have their passports and own frequent flier accounts.
Updated: September 29th, 2021