Two of the best things about Nashville are the unique pieces of street art and the great things to eat. This Eats & Street Art Tour covers the Gulch, an industrial-chic neighborhood that is home to one of the most famous (on Instagram) murals.

Eats & Street Art tours are self-guided walking tours that take you to some of the most popular (and some of the lesser-known) street art and murals, with food stops at local eateries, cafes, and stores. It is a great way to experience a new neighborhood and delve into the deliciousness that feeds your soul and your belly.

Take this tour in whatever order or route you want, but our suggested route is below with information about each stop. The tour is about a mile long. We chose to start with the heavier food to walk it off as we go! Nathan Brown is known for his geometric artwork (as also seen on our East Nashville Eats & Street Art tour). This work was commissioned by Patagonia. Brown and another local artist, Chris Zidek, had artwork previously on the building but when Patagonia expanded the building it was destroyed - but they hired Nathan again to create something new. This work is based on the brand's signature “Fitzroy” mountain range. Across Mansion Street is a building with hourglass print all around it. This was until mid-2019 the home to Colt's Chocolate - the oldest artisanal chocolatier in Nashville (before working in desserts, Mackenzie Colt was on Hee-Haw!) but it was sold to new owners and moved out of the Gulch. It's a cool exterior decoration but there is no information as to who did it. 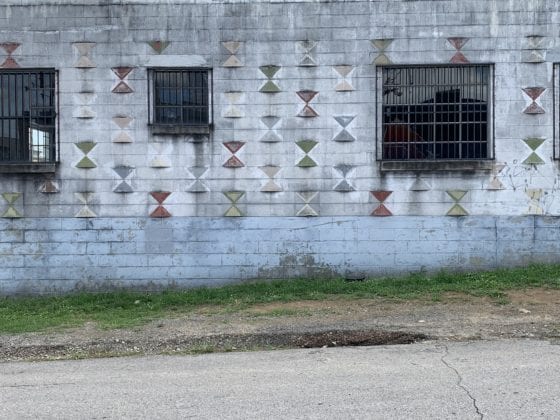 QUICK TIP: In a few stops is one of the best rooftop bars in Nashville. If everyone is over 21+ and you want to stop here during prime cocktail drinking hours, download the Yelp App and add your name to the waitlist at the LA Jackson now! That way, after you can see the next piece of art, grab a bite at the next food stop and be at the rooftop bar when your name is called.

This half-Nashville skyline half guitar artwork was done by a local middle school teacher, Allison Johnson, who also does music-themed art. The owner of the building saw Johnson' work in an art gallery and commissioned this piece. This Instagram favorite is maybe one of the most popular murals in Nashville. There is so often a line that the art work includes a line directions on the sidewalk. It took Kelsey 60 paint pens to create these large wings - and the little wings off to the side! Here is our guide with her kids - after a 30-minute wait in line! Jason Woodside is a California based artist, and this piece is very similar to his other works in style using vivid colors and patterns. Ian Ross, also Califoniaian, is the in house artist in residence at the Facebook Headquarters. Just between the two Nashville Walls Projects is a small 2-foot tall Legoman. You'll see these all over Tennessee! Forbecks is Chris Tidwell and he started painting Legomen because the idea behind Legos is to play well together and that was a message he wanted to share with everyone. We talk about Google Fiber and see some of Zidekahedron other work on our East Nashville Eats & Street Art tour. Google Fiber commissioned work from more than a dozen artists in 5 cities across America (Louisville, Nashville, Kansas City, San Antonio, Austin, and Huntsville) to promote beauty on the internet ... and the Google Fiber internet service! Zidek used sacred geometry to create this piece. 12 & Porter is a historic music venue (well from 1984) were Keith Urban, Sugarland and Dierks Bentley were discovered. The mural outside was painted by a local musician/artist Kim Kennedy and featured another local musician, Dave Baker, who is the guitarist in Kellie Pickler's band. Canden is a historian and tour guide in Washington DC with 4 published books about the city. She has written for HuffPost Travel and has been featured in the Washington Post, WTOP, and numerous other DC papers. She's also been interviewed by the BBC, NPR, Travel Channel and Discovery Family Channel. Canden is the producer of our podcast, Tour Guide Tell All With a M.A. in History from University College London and a B.A. in History from Elon University, she is an authority on D.C. history, and has led tours in the city for over 10 years. She currently resides in DC, but has also lived in London and South Korea, and has travelled to 28 countries. Her two children (both under the age of 4) have their passports and own frequent flier accounts.
Updated: September 29th, 2021