Most Instagrammable Sites in Georgetown

Georgetown is an instagram hotspot - just check out our feed! But this is a list of our top Instagrammable sites in Georgetown with some of the history behind it. #tourguidelife In 1948, Julia and Paul Child, who met while working for the O.S.S. (whose head also lived in Georgetown), purchased this little house. Research hasn't shown if it was this color when she lived here, but the buttery color is the perfect color for the soon to be famous chef.

It wouldn't be long until the couple moved to Paris and rented this house out for eight years, but when they returned to Georgetown, Julia would host cooking parties for neighborhood ladies - such as Katherine Graham, of the Washington Post.

The husbands were allowed to attend the cooking events under  two rules. They had to eat everything on the plate and they could make no criticisms! 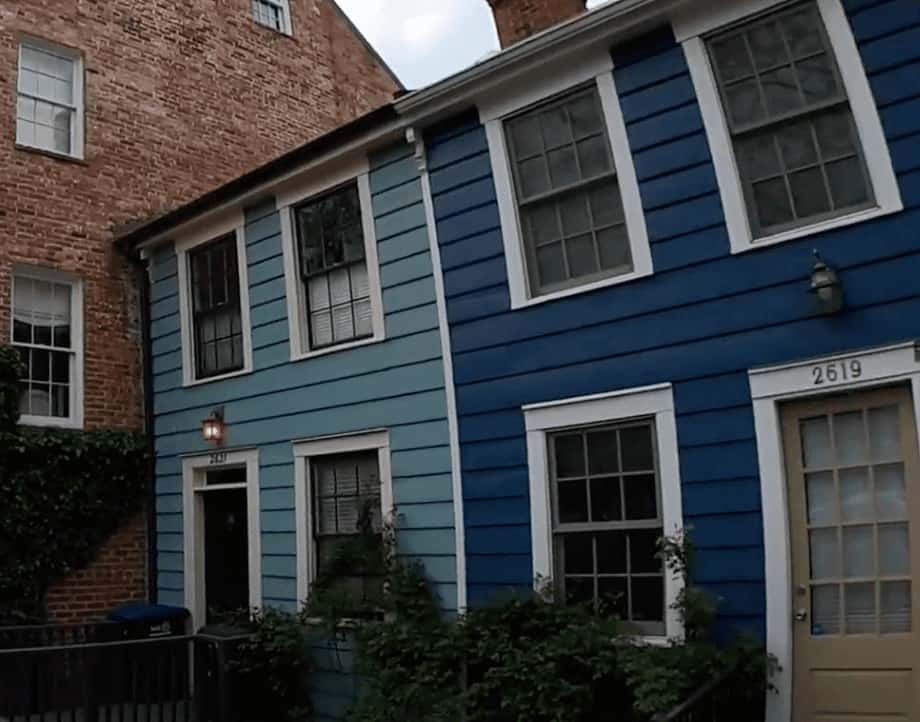 The northeastern part of Georgetown by Rock Creek has a historic distinct from the rest of the neighborhood. Often called Herring Hill, after the herring caught in the nearby creek, this was a self-sufficient and successful black American community, even before the Civil War and the Emancipation Proclamation.

With the heritage of tobacco farmers starting Georgetown, there was a large number of slaves but here in Herring Hill you would also find many successful black owned businesses and professions.

Though not much remains today, you can see a distinctiveness in the architecture in this area, as well as many area churches still standing.

For self guided walking tour of the area that focuses on the black history of Georgetown, visit our Self Guided Tours. 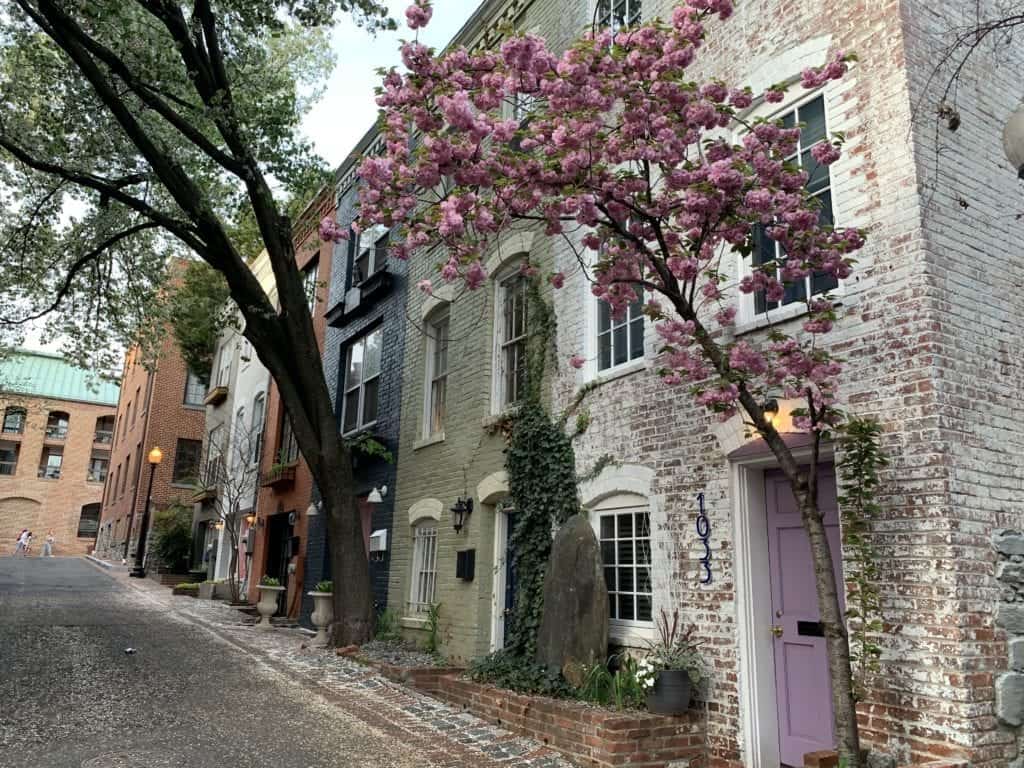 Cecil Place NW is one of the quaintest streets in Georgetown which makes it an photographers favorite. It's south of M Street between Grace Street and K St NW. It's a bit unexpected as its surrounded by industrial Georgetown, though there would have been small row houses like this throughout the waterfront area.

After all, originally Georgetown only extended to what is N Street now! Pomander Walk is similar to Cecil but being further away from the hustle and bustle, it's less photographed! It's just off Volta Place and is an adorable set of alley houses.

These houses originally had no electricy or running water and were built along the driveway to the garages of the larger homes nearby. They are all about 600 square feet and were mostly inhabited by black laborers when they were built over a century ago. As you exit the short walk at the top of the hill, if you see a house with a red door across the street from the Danish Embassy - that is the newest residence of Bill and Hillary Clinton! Land was given by the Church of England in 1769 for a church at this location, but the church was not completed until 1804. The church as it looks today has gone through many changes - in the 1830s, it was an artist's studio! Dolley Madison and Francis Scott Key were members of the congregation.

The intimate wooden Chapel of the Carpenter is located around the corner.

The church is at the corner of O St NW and Potomac St NW. Alexander Graham Bell began working out of the carriage house in his father's backyard on 35th St NW. Using the money he won from the Volta Prize for his invention of the telephone, he opened the Volta Laboratory for the education of the deaf. This new temple style building for the Volta Bureau broke ground in 1893 in a ceremony led by Helen Keller.

It was here that the graphophone was invented - an improved version of the phonograph. The recording device first played by a quote from Hamlet and an introduction "I am a graphophone. My mother was a phonograph."

This invention would later lead to Volta Graphophone Company that today is Columbia Records.

The temple-like Bureau is located at 3414 Volta Place NW. 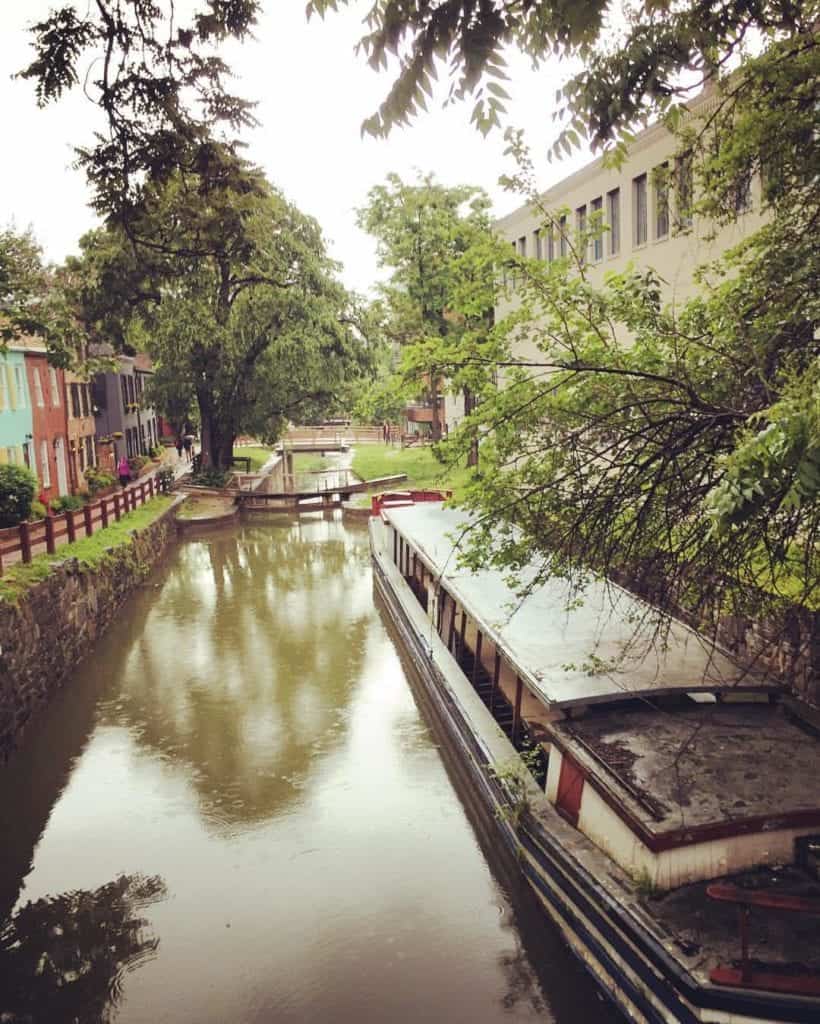 The C&O Canal was an effort to continue bringing industry to the Towne of George. Once the Potomac River silted up and ships were no longer able to easily traverse, Georgetown risked losing its status as a port city.

The groundbreaking on July 4, 1828 happened on a hot and humid day without the desired fanfare. President John Q. Adams had been toasted, dined and escorted up the Potomac River only to hit rocks when he first tried to break ground. It took a couple of tries and throwing off his jacket in order to be successful but this was a sign of the difficulties that lay ahead. It would not be completed until 1850. It was meant to run from Georgetown all the way to Ohio, but made it as far as Cumberland, Maryland. The C&O Canal was a site of contention during the Civil War where both sides blocked the waterway, burnt the ships, and claimed it as their own. The battle lines crossed back and forth over the canal through the war.

Today the C&O Canal is 184 miles with 74 locks as you head west to allow canals to travel in both directions. Up until the late 2000s, mule driven canal boats would take tourists up and down the canal.

9. Literally any street in Springtime Georgetown is a historic district and the neighborhood has (some) cobblestoned streets, lined with trees and beautiful gardens. You'll often see residents out working on their garden. 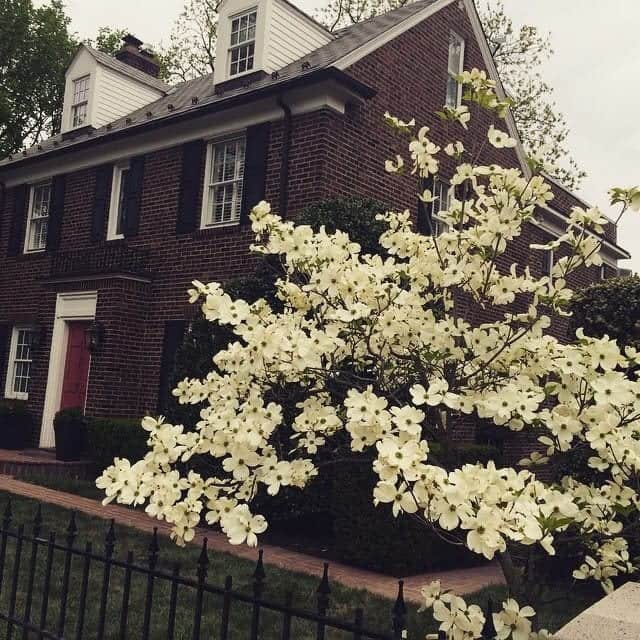 (OR ANY STREET AT ANY TIME, LET'S BE HONEST) 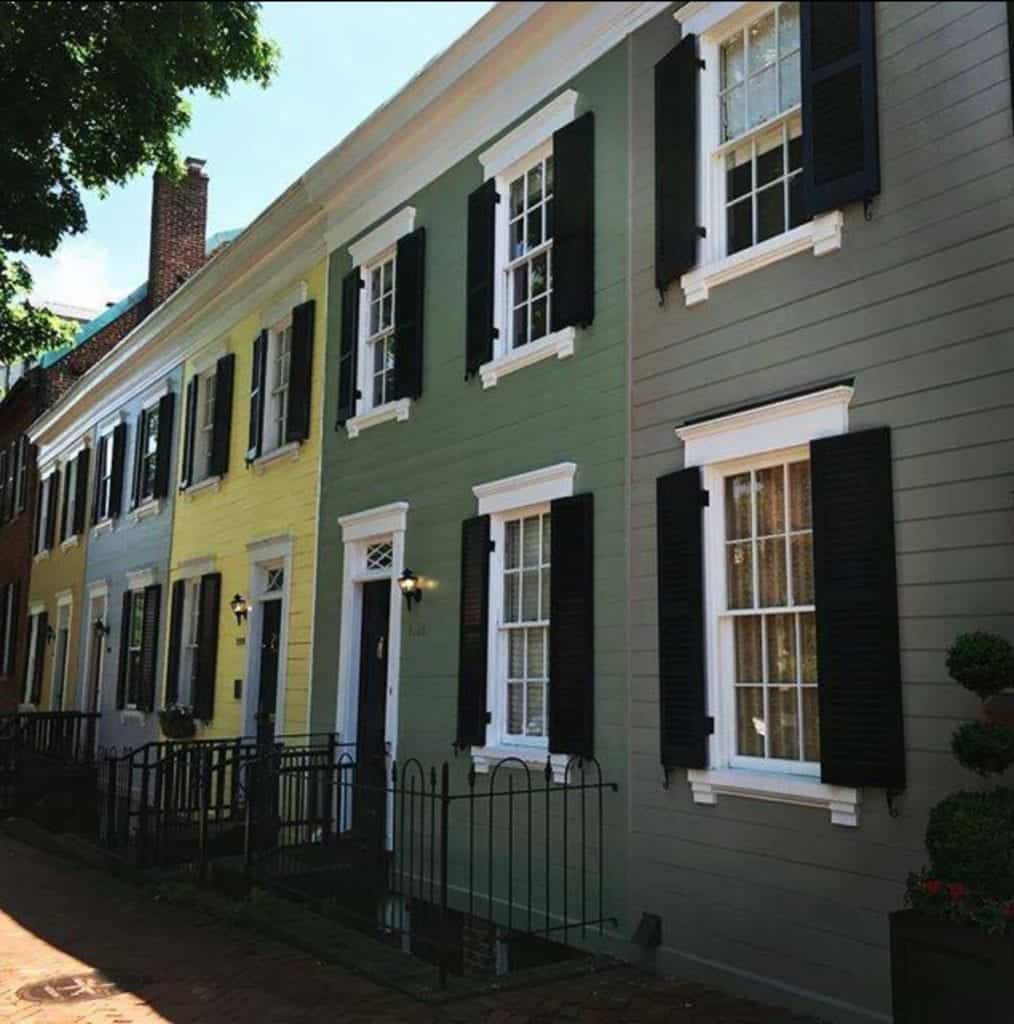 At 2726 P St NW, you'll see the smallest house in Georgetown. At 8 feet wide, this is called a Spite House. These are very popular up and down the East Coast and often joked that they were built to block the sun or fresh air of a neighbor.

This house wasn't actually built out of spite, though. In the 1870s, it was an extension of the house to the right. You can see the cornices at the top overlap. 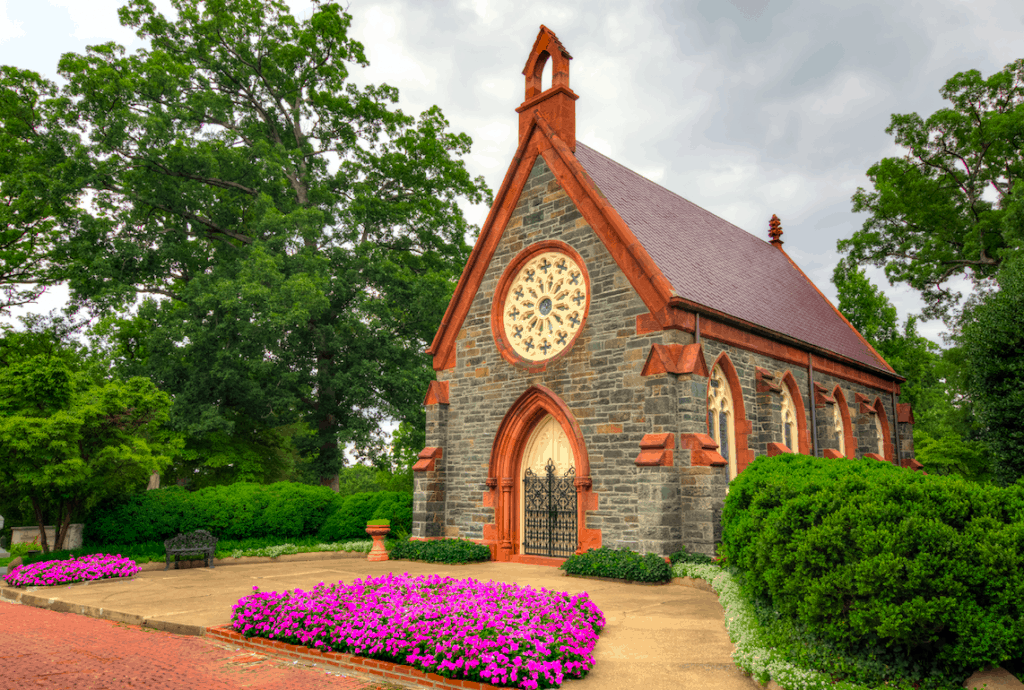 Buried in Oak Hill Cemetery are Edwin Stanton, Secretary of War under Abraham Lincoln; Antonia Ford Willard - a Virginian women arrested as a Confederate spy who would end up marrying her Union prison guard, stating on the marriage that she could not take revenge for her country "but I could torment one Yankee to death, so I took the Major." 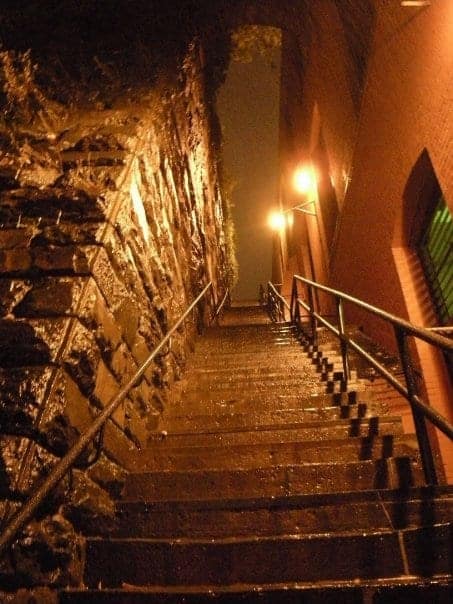 This set of stairs was made famous by the 1970s horror film, The Exorcist, but they were here long before. If you want to know more about them, take our Ghost of Georgetown Walking Tour!

Canden is a historian and tour guide in Washington DC with 4 published books about the city. She has written for HuffPost Travel and has been featured in the Washington Post, WTOP, and numerous other DC papers. She's also been interviewed by the BBC, NPR, Travel Channel and Discovery Family Channel. Canden is the producer of our podcast, Tour Guide Tell All With a M.A. in History from University College London and a B.A. in History from Elon University, she is an authority on D.C. history, and has led tours in the city for over 10 years. She currently resides in DC, but has also lived in London and South Korea, and has travelled to 28 countries. Her two children (both under the age of 4) have their passports and own frequent flier accounts.
Updated: April 29th, 2022