This post covers the interesting things to see and do in Prague’s Old Town district, formatted as a walking tour.

The walk is just over a kilometer – or a little less than a mile.

What is Old Town?

Old Town is the picturesque historical centre of Prague, covered in cobblestone streets, interesting architecture, and the city’s most well-known landmarks.

You’ll find layers of history and change all throughout Old Town, as Gothic buildings change toward Renaissance and Art Nouveau.

Even the famous Astronomical Clock has multiple numerals and symbols for telling time throughout the centuries! If you’re looking for guided tours of Prague, check out our post listing free walking tours.

Alternatively, you may also want to consider a self-guided exploration game which allows you to learn about Old Town Prague while attempting to solve a mystery!

Our starting point is the Powder Tower, located at 5 Náměstí Republiky (use this map), right where Old Town and New Town meet.

It’s along the busy Na Prikope Street, so there are lots of ways to reach this spot by public transit.

The closest metro stations are Náměstí Republiky (Line B) and Můstek (Lines A, B)

There is an easy walk from the train stations Hlavní Nádraží and Masarykovo Nádraží to the tower as well.

Below are 20 things to see or do in Old Town Prague. We’ve written it in geographical order so that you can also use this as a self-guided map. Our tour begins from the Powder Tower and ends at the Charles Bridge and includes stops in the Old Town Square and the Old Jewish Quarter.

TIP: We also offer a GPS-led audio tour of Old Town Prague and the Jewish Quarter (€1.99) that is more detailed than the content below.

Download our free walking tour app on (iTunes) or (Android).

The Powder Tower is the current and historic entrance to Old Town Prague, which was built in 1475. The Gothic structure is one of the original gates in the wall that used to divide Old Town from New Town.

Coronation processions would start here and cross the Charles Bridge before continuing toward Prague Castle.

If you want to climb the Powder Tower, 100 CZK gets you a ticket, sold one floor up, to see a view of the differences between Old Town and New Town.

The Municipal House is connected to the Powder Tower, though their architectural styles are very different.

There’s a concert hall inside, and if you’re a fan of Art Nouveau, it is a must-see. The rest of the building is accessible by booking a tour, available in multiple languages.

TIP: You can even have a 3-course dinner in the Municipal House!

The House at the Black Madonna is an example of Cubist architecture – a style better known to many in painting than in design, but this building offers Cubism inside and out. There aren’t many buildings of this kind in Old Town, but it was on the cutting edge, architecturally, of its time. The Black Madonna statue is a remnant of the Baroque building that once stood on this corner.

The gallery space here is operated by the Museum of Decorative Arts.

TIP: You can learn more about Cubist and Art Nouveau architecture on this tour.

The Estates Theater is most famous for its connection with Mozart, who personally conducted the premier of his opera Don Giovanni here. Today, the Estates is part of the Czech Republic’s National Theater, which hosts performances daily. You can find theater, ballet, and opera, with a focus on Mozart.

Charles University is named for the Holy Roman Emperor Charles IV, who got permission from the Pope to found a university here in 1348.

It continues to operate today, making it one of the oldest universities in Europe.

Jan Hus, founder of the splinter Hussite religion, was a rector here. Students took part in the battle on Charles Bridge during The Thirty Years War.

It was even home to Albert Einstein’s physics department.

Celetna Street gets its name from a style of bread that used to be made here. Bakeries, other trades, and the homes of influential guilds were located here in the 10th century. One trade that’s doing strangely well on Celetna Street today – wax museums. You’ll pass three in the short distance from the House at the Black Madonna to Old Town Square.

Museum of Torture and Torture Instruments

Our first stop in Old Town Square is the Church of Our Lady Before Tyn. In medieval Prague, the priest of this church was also the priest of Charles University, and coronation marches would stop here for representatives of that university to swear oaths to the new king.

NOTE: Via Musica, a service that sells tickets to music events all over town, is on the path just to the left side of the church.

This 18th-century Rococo building was once a private palace for the Kinsky family, and subsequently held schools, shops, and other public services. Today it’s part of the Czech National Gallery, which operates from several sites.

This monument is one of the newest additions to the Square – it was added in 1915, on the 500th anniversary of Hus’ death. Nearby, you can see where the column with the Virgin Mary used to stand – on the ground, slightly back toward where you entered the Square, is a diagonal strip that cuts through the grid of stones.

At noon, the column would cast a shadow along this line, and it was used to determine the exact local time.

This building was named when many travelers through the streets weren’t literate – when buildings were named after distinctive elements of its façade. The House at the Stone Virgin Mary, however, tends to be more noticed for its Art Nouveau painting of King Wenceslas than for its Virgin Mary statue.

It is the same King Wenceslas that is featured in the old Christmas song.

The astronomical clock has been a spectacle since 1410.

The outermost ring of symbols has Gothic numerals reflecting the older form of local time. Modern time, then Babylonian time can be seen in smaller circles.

When the clock hits the hour between 9:00 am and 23:00, figures come to life for a quick pageant, including apostles and a trumpeter.

You can climb the clock tower, which is connected to Old Town Hall.

You can also find Prague Underground Tours, which offers a broader view of the underground, a few steps further down on your left at 11 Male Namesti, inside the Art Passage.

St. Nicholas’ Church has an even more convoluted religious history than many of its neighbors – it’s gone from being Catholic to Orthodox and then to Hussite. Today it is, like many others, a concert venue.

While most people in the country don’t claim a religion at all, its churches are historic sites with incredible acoustics.

As historic as most of Old Town’s buildings are, Maisel Synagogue is one of the very few remaining landmarks of the old Jewish Quarter. During the Nazi occupation, this building was used to store property stolen from local Jewish families.

Today, this building is part of the Jewish Museum, which includes historical exhibitions at several sites as well as tours of the neighborhood.

TIP: The Jewish Museum is included on a Prague City Pass.

This is a 19th-century building standing on the site of what used to be called the Old Synagogue, built in the 12th century. The “Spanish” part of the name comes from the Moorish style it’s designed in, and the beauty of all that detail alone makes it worth going inside.

It’s also home to another location for the Jewish Museum.

TIP: The Jewish Museum is included on a Prague City Pass.

This man, who is commemorated all over this city, published very little during his lifetime, wrote only part-time, died at age 40, and left his remaining work to a friend who he asked to burn it all unread. His friend decided to publish it instead.

Kafka is honored here because he grew up in the neighborhood, attended Charles University, and joined Albert Einstein at salons.

The Jewish Town Hall is another philanthropic contribution by Mordecai Maisel of the Maisel Synagogue. 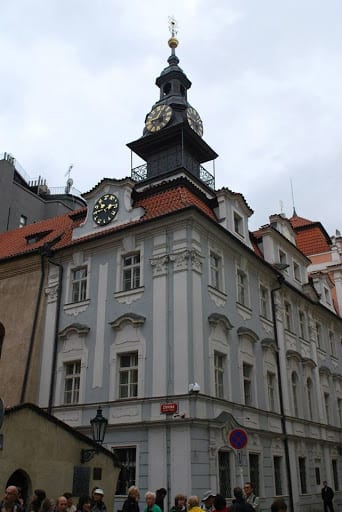 Part of Jewish separation in cities like Prague was having some of their own government, including mayors and judges, and Josefov is still a separate administrative division within Prague today.

The Old-New Synagogue is the oldest working synagogue in Europe, built in 1270. This one is called “Old-New” because when it was built, there was already the Old Synagogue on the site where the Spanish Synagogue is now, but lots of newer ones have also been built since.

The Gothic design continues into a much more elaborate interior.

Headstones in the Old Jewish Cemetery are spaced unusually close, reflecting centuries of burial in gradually elevating layers – soil has been added repeatedly to make space for new burials.

Dates span from 1439 to 1786, at which point much of Europe shifted to using cemeteries outside their city limits for fear of spreading diseases.

Visitors can only enter the cemetery with tours run by the Jewish Museum.

TIP: The Jewish Museum and Old Jewish Cemetery are included on a Prague City Pass.

This is the home of the Czech Philharmonic Orchestra. On top of its multiple performance spaces, it also houses a contemporary art hall. The largest music venue here is Dvorak Hall, named for the late 19th/early 20th-century composer, who has a monument that sits opposite the Rudolfinum.

This is the oldest, and for a long time the only, bridge across the Vltava River. Construction began in 1357 by its namesake, Charles IV. The bridge connects Old Town with the Lesser Quarter and Prague Castle.

The statues along it are a 17th and 18th-century addition, mostly, although the ones you see now are replicas.

If you’re interested in exploring Prague Castle, we have a post that lists Castle Tours here. There are free walks that begin from Charles Bridge.

We also have a more general list of excellent guided walking tours in Prague.

Stephen is the CEO of Free Tours by Foot and has overseen the transformation of a local walking tour company into a global tour community and traveler’s advice platform. He has personally led thousands of group tours in the US and Europe, and is an expert in trip planning and sightseeing, with a focus on budget travelers.

Stephen has been published and featured in dozens of publications including The Wall Street Journal, BBC, Yahoo, Washington.org, and more.