The art in Chicago isn't always in museums - though Chicago has a great art museum centrally located near the Loop - but much of what you can find in the city is public art. No entry fee, no docent - in fact, no walls. They are outside in parks and plazas!

With help from the Chicago Sculpture International and Chicago Public Art Group there are ever changing exhibits through the city.  From stand alone sculptures to painted artwork on the sides of historic buildings, wandering the streets of Chicago can be like a visit to an art museum if you know where to look.

On our Loop Highlight Tour, we see two pieces of well-known art:

But there is so much more to see around the city than just these two well known pieces of work. For a guide to lead you through the city, look no further than the Chicago Public Art Blog.

Is Daniel Chester French your favortie sculptor? Then the Chicago Public Art Blog can tell you where to find his work. Don't care who it's by, just want to see some public art without walking too far? They can tell you public art by location as well.

Of course, if you want walls around your art - the Art Institute of Chicago has those.

Chicago's Loop is full of public art. Here are some of the best pieces that you should not miss. The Four Seasons by French Artist Marc Chagall is a mosaic composed of thousands of inlaid chips depicting the four seasons of Chicago.  According to Chagall, "the seasons represent human life, both physical and spiritual, at its different ages."  The mosaic was designed and built in Chagall's studio in France and brought over to be installed in 1977 to honor the American bicentennial and Mayor Richard J. Daley.

Ironically, this gorgeous piece of art has suffered a lot of destruction from Chicago's harsh four seasons.  In 1994, it underwent extensive restoration and a canopy was added to help protect the structure.  You can see The Four Seasons on the Loop Tour. The untitled sculpture by Pablo Picasso in Daley Plaza in the Chicago Loop is referred to by locals as simply “The Picasso.”  After finding out that Pablo Picasso was one of the best living artists, Mayor Daley makes it hThe “Picasso”is mission to convince Picasso to make Chicago a piece of artwork.

When it was first unveiled in 1967, Chicagoeans hated this sculpture, finding it odd.  Daley was encouraged to remove it and replace it with a statue of “Mr. Cub.”Daley said at the unveiling: "We dedicate this celebrated work this morning with the belief that what is strange to us today will be familiar tomorrow.”  Today, everyone in Chicago celebrates and love this sculpture.  This sculpture can be seen in the movies: Blues Brothers, The Fugitive, and Ferris Bueller’s Day Off.  You can see The Picasso on the Loop Tour. The Flamingo is a whimsical, red sculpture that sharply contrasts with the simple, black surrounding buildings that were designed by Mies van der Rohe.

The 53-foot-tall steel figure weighs more than 50 tons and is considered a “stabile” as opposed to a mobile, because it is anchored to the ground. The Artist said about his work, “That others grasp what I have in mind seems unessential, at least as long as they have something else in theirs.”  You can see The Picasso on the Loop Tour. 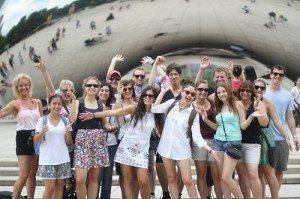 This sculpture was built in 2004 as a part of the newly built Millennium Park.  Although most locals call it “The Bean”, the artist Anish Kapoor titled it “Cloud Gate”because 80 percent of its surface reflects the sky.  This giant stainless steel structure also reflects the beautiful row of buildings that line Michigan Avenue.  You may recognize the Bean from the movies: The Vow, Source Code, and The Break-up. This is the last stop on the Loop Tour.

Written and photography by Mel Yonzon

Canden is a historian and tour guide in Washington DC with 4 published books about the city. She has written for HuffPost Travel and has been featured in the Washington Post, WTOP, and numerous other DC papers. She's also been interviewed by the BBC, NPR, Travel Channel and Discovery Family Channel. Canden is the producer of our podcast, Tour Guide Tell All With a M.A. in History from University College London and a B.A. in History from Elon University, she is an authority on D.C. history, and has led tours in the city for over 10 years. She currently resides in DC, but has also lived in London and South Korea, and has travelled to 28 countries. Her two children (both under the age of 4) have their passports and own frequent flier accounts.
Updated: October 11th, 2013