This post is a list of buildings or locations in NYC associated or built by Donald Trump and the Trump Organization. Many of these building can be seen on our free walking tours.

Donald Trump is the second native New Yorker to be elected to the Oval Office, the first having been Theodore Roosevelt, who was born in Gramercy Park.

Trump, who was born in the borough of Queens, also happens to be one of the biggest real estate tycoons in the city.

He has more 30 properties in the United States. Trump's real estate imprint, buildings that he currently or formerly owns, is all over Manhattan.

From Soho to Chelsea, Midtown to Downtown, Upper West Side to the Upper East Side, there is a Trump connection.

This self-guided tour lists the addresses as well as links to our neighborhood guides so you can explore on your own.  You might consider timing your visits to these buildings to sync up with one of our many pay-what-you-wish walking tours. This 58-story skyscraper, completed in 1983, is a mix of apartments, offices and stores.  It is the central headquarters for The Trump Organization.

It also is where President Trump's penthouse is located.  This building shouldn't be hard to find these days given all the recent security and protests.

Trump Tower is the location of the "You're fired” boardroom for NBC's The Apprentice.

If you plan on going here, see our post Visiting Trump Tower in New York City.

In the summer of 2016 in the height of the presidential election race, a man attempted to scale the building, claiming he had an important message to deliver.

Just days after Trump won the election, protesters gathered outside, changing the flashy class of the tower into a site of outrage.  This video shows both: Just east of Grand Central Terminal stands the 295 ft. (90 m), 26 story Grand Hyatt Hotel. When it opened in 1919, it was known as the Commodore hotel, named after railroad tycoon Cornelius Vanderbilt.

Check out our Grand Central Terminal tour and Midtown tour.

Known as the busiest convention center in the United States, it was opened in 1986 and named after United States Senator Jacob K. Javits who died that year.

In the early 1970s, Donald Trump supported the idea of building a convention center at this location, bought an option when Penn Central declared bankruptcy in 1975 and wanted to name it the Trump Center, after his father, Fred Trump, who was also a real estate developer.

At one point in the 1970s, The Donald almost tricked the city into naming it that. The Javits Center is also where ComicCon and the NY International Auto Show are held.

Located just north of the Highline, you can get a great close-up view of the Javits Center as you enter or exit the Highline on 34th Street.

We offer several tours of the surrounding area with an emphasis on the must-see High Line!

Click here to find out about the many different pay-what-you-wish tours we offer.

Feel free to use our self-guided tour of the High Line and neighborhood and also the Chelsea Market. We even have a free Audio Tour of the Highline! 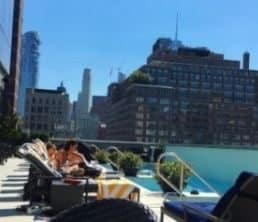 As of 2016, this is the latest building project constructed by Trump with his name on it.  It is a four and a half star hotel with amazing amenities such an outdoor pool deck complete with a waterfall, cabanas, and

If you can't get a room here, you may want to coordinate your visit so you can take our pay-what-you-wish SoHo, Little Italy & Chinatown tour, which meets only one block away!

Between Nassau Street and William Street Also known as the Trump Building, this 71-story commercial skyscraper, completed in 1930 after 11 months of construction, is probably the most historic of all of Trump's buildings.

Originally known as the Bank of Manhattan Trust Building as well as the Manhattan Company Building, it was renamed the Chase Manhattan Bank building then bought by Donald Trump and renamed The Trump Building.  It remains 100% commercial space.

In 2003, Trump's efforts to sell the building for more than $300 million proved unsuccessful.  In 1998, the building was designated an NYC landmark.

It has also been reported that he paid $10 million and that is worth about $400 million.

Be sure to take our Lower Manhattan or All-in-One Downtown tour for an up-close look at this iconic edifice, which was the tallest building in the world for only four days!

Read more about the historic skyscraper race in 1929 between 40 Wall Street and the Chrysler building.

UPPER EAST SIDE AND TUDOR CITY 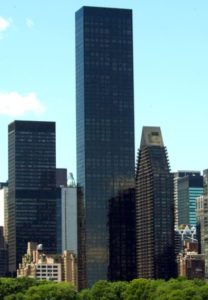 You might recognize from NBC's The Apprentice.  This 72-floor apartment building was completed in 2001 at a cost of $300 million.

This building features a two-story bar and cocktail lounge called the World Bar, which is frequented by UN diplomats.

Also of note are the large windows, giving residents spectacular views of the East River and Midtown.

Prices range from $625,000 for a studio to over $28 million for a penthouse.  Originally, the top two floors, a 20,000 square foot space, were being sold as one penthouse for $58 million, but didn't sell and were then split into four units.

Yankees great and future Hall of Famer, Derek Jeter, bought a 5, 425 square foot condo here for $12. 6 million and sold it for $15.5 million in 2012.  Other tenants have included Bill Gates, Sophia Loren, and Harrison Ford. Also located on the Upper East Side, this building was formerly the Mayfair Hotel.

610 Park Avenue is also known for Daniel Boulud's legendary restaurant, Daniel.  This four-star spot, considered to be one of the world's best restaurants, offers full butler service to 610 Park residents.

This 1929 building was originally the Viceroy Hotel.  It has 32 stories high and has 8 penthouses.

Trump purchased it for $115 million in 2002 and converted it into a residential building in 2004. Rising to 623 ft. (190 m.), this 54 story luxury tower is the tallest building on the Upper East Side, and it was designed to resemble classic art deco architecture of the1920s and '30s.

Trump purchased it in 1985 and it was completed in 1991. The average purchase prices of a condo here are:

UPPER WEST SIDE AND MIDTOWN WEST Trump bought it in 1994 with the intention of making it a part condo part hotel.  In April 1996, Trump said that he would move into the building's penthouse.

He also said the address would be changed from 7 Columbus Circle to 1 Central Park West.

Out front, as an homage to the Unisphere located in Trump's home borough of Queens, is a 30-foot-wide silver globe, titled “Trump International".

Speaking of film locations, many of our tours, including Central Park, Midtown Manhattan, and Grand Central feature many movie locations. Recently LEED-certified (Leadership in Energy and Environmental Design), this 1964 building, originally designed by renowned architectural firm, Emery Roth & Son, and restored in 2013, occupies an entire block in the center of Manhattan.

It has 43 stories of office space and offers spectacular views of Central Park and New York City's skyline.

In sharp contrast to bedazzling golden Trump Tower a few blocks away, this building has a stunning, crisp and modern all-white marble lobby.

Speaking of New York City's unparalleled skylines be sure to take our Brooklyn Bridge/Brooklyn Heights/DUMBO tour.  From the bridge, you can fabulous views of both the downtown and midtown skylines.

along the Hudson River between 59th and 72nd Sts. Built on the former New York Central Railroad yard, it includes Trump Place and Riverside Center. Trump sold it to investors from Hong Kong and China in 1997.

Trump parlayed his sale of Riverside South into two premier office buildings: 1290 Avenue of the Americas and 555 California Street in San Francisco.

This is considered the most lucrative deal of Trump's career, accounting for the largest percentage of his net worth, approximately $3.5 billion, according to Fortune Magazine.

The three buildings that make up Trump Place is no longer emblazoned with the Trump name.

During the election race, residents of these buildings began a petition to have the name removed based on offensive statements and actions then-nominee Trump made.

The three buildings are now known simply by their street addresses: 140, 160 and 180 Riverside Blvd.

Central Park South and the southwest corner of 6th Avenue After a long stretch of legal battles between Trump and the tenants of 100 Central Park South, a final settlement was reached in 1988.

The building was converted to a condominium and 51 units remained rent regulated.  Some tenants here pay less than a $1000 a month in rent for a one-bedroom apartment! At one point, Eric Trump lived here.

Central Park is such an amazing place with or without Trump buildings, it is definitely a place to explore. We offer several different tours we offer of Central Park, including bike tours, walking tours and a self-guided tour. This public ice skating rink that operates from October-April is in the southern area of Central Park.  It opened in 1949 with funds donated by Kate Wollman.

In case you weren't sure if Mr. Trump had anything to do with this ice rink, it will become clear once you're here. Trump's name is all along the rink walls and on the Zamboni (ice resurfacing machine).

The rink was closed in 1980 for a two-year renovation plan at a cost of $9.1 million.  In 1986, when the project was still not complete and the budget had grown to $13 million, Donald Trump persuaded Mayor Ed Koch to let him take over the project.

Trump said it would be completed in four months for an additional $2.5 million. The rink reopened to the public on November 13, 1986, under budget at $2.25 million and two months ahead of schedule.

Donald Trump operated the rink from 1987 to 1991.  Since 2001, Wollman Rink has been operated by The Trump Organization and Rink Management Services of Mechanicsville, Virginia.

The two organizations also run the Lasker Rink, located on the north edge of Central Park. The rink has been featured in several movies, including Love Story and Serendipity.

NOTE: ​If you want to learn more about Trump's rise to power as a real-estate developer in New York, check out Social Justice Tours​. Tickets are just $16 and a portion of the proceeds go to a worthy non-profit organization.

Stephen is the CEO of Free Tours by Foot and has overseen the transformation of a local walking tour company into a global tour community and traveler’s advice platform. He has personally led thousands of group tours in the US and Europe, and is an expert in trip planning and sightseeing, with a focus on budget travelers. Stephen has been published and featured in dozens of publications including The Wall Street Journal, BBC, Yahoo, Washington.org, and more.
Updated: January 10th, 2018