How to Get Cheap Broadway Tickets

This post is about the many ways you can get discount Broadway tickets, including through the TKTS booths, ticket lotteries, and a couple of other options.

GET DISCOUNT TICKETS BEFORE YOU ARRIVE

You don't need to be in NYC to get good prices on Broadway tickets.

On resale websites like StubHub, you can buy tickets in advance and you have a lot of flexibility to search the prices and seats you want, and they often offer lower than retail prices. 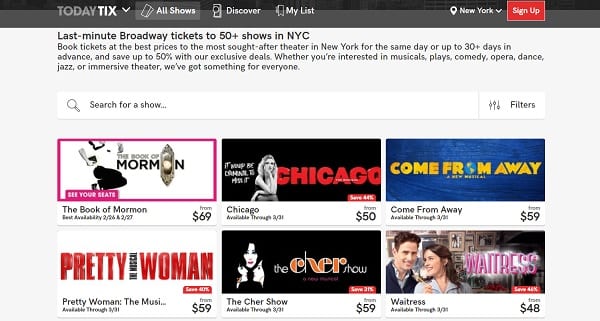 The pros of getting discounted tickets before your trip are that you are guaranteeing that you will see the show of your choice on a date you choose.

In contrast, the "same day as performance" options, such as TKTS, lotteries, rush, and standing room only, are never a sure thing.

The major con is that you may have to spend more money than you would if you waited until you are in New York and can take advantage of the different ways to get cheap tickets described below.

Before you read on, consider listening to an episode of our NYC Travel Tips podcast that covers discounted Broadway tickets.

This podcast offers bite-sized audio clips with tips on how to plan your trip to NYC. You can get our podcast on Apple, Google, or wherever you get your podcasts.

There are, of course, many other benefits of getting a tourist pass.

The biggest benefit is saving a great deal of money. Some passes can save you up to 55% on your itinerary of attractions to see.

To find out if getting a tourist past is right for you, our post, New York City Attraction Passes: Which One Is the Best to Buy, will help you make that decision.

TodayTix is an easy-to-use website that sells discounted tickets to shows.

It also has a very useful app where you can enter some of the digital lotteries, which we will talk about below.

Also, check out Broadwaybox and Theatermania where you can find reduced-price tickets to some of the most popular shows on Broadway.

You can also find deals on Groupon, Living Social, and Goldstar, sometimes as much as 50% off.

These might not be for the top shows, though. Still, it is always worth a look.

On resale websites like StubHub, you can buy tickets in advance and you have a lot of flexibility to search the prices and seats you want, and they often offer lower than retail prices.

See a Show in the Off-season

If you don’t have specific dates for your NYC visit but know you really want to see a show, consider coming to NYC during the tourist off-peak season.

Tickets tend to be less expensive in spring or fall whereas they are more expensive during the summer and even higher during the Christmas holiday seasons.

Read our post, When is the Cheapest Time to Visit NYC. This biannual event happens in late January-early February and early September and allows guests to purchase two tickets for the price of one.

It is actually a two-week-long period.

Similar to Broadway Week, this is a biannual event and occurs twice a year, during February and late September to early October.

You can get 2-for-1 tickets to over 20+ Off-Broadway shows which are often every bit as good, if not better, than some Broadway productions.

See our post on the difference between a Broadway and Off-Broadway Show.

Throughout the year there are various theater performances that you can see, many for free.

In July and August, you can attend Broadway in Bryant Park, and see free, short performances by the cast of some of the top shows.

In June, July, and August, you can see free, star-studded cast performances of Shakespeare in the Park which happens every summer in Central Park.

In the holiday season, from late November through the New Year, you can see holiday-themed shows, besides Broadway shows. Some are even free!

Websites Where You Can Find Discounts

If you are flexible, you can often find discount Broadway tickets at the last minute.

Look at Playbill, Broadway’s official magazine. Their website has an up-to-date listing of rush, lottery, standing room, and student/young professional discounts below.

Take a look at the Broadway for Broke People website. It offers information about particular shows such as their performance schedules and which method is will get you the cheapest ticket.

Check some social media websites. For example, look for suggestions on how to get cheap Broadway tickets on Reddit. You may find people posting information on how you can get half-price Broadway tickets.

Discounts Based On Age

People who are 35 or under should check out this special program called 35 for $30.

Seniors may have access to special discounts for Broadway and Off-Broadway productions. Call the theater for the show you would like to see and ask them. Also, check AARP if you are a member.

Be sure to check our posts on things to do in NYC by month Broadway-related events and to see what shows are playing during your visit.

One can buy tickets for same-night performances at the well-known red TKTS booths located in Manhattan.

The most popular (and most crowded) is the Times Square location. There are two other locations, one at Lincoln Center and the other at the South Street Seaport.

Expect long lines at the TKTS booths, especially at the Times Square location, and plan your day accordingly.

TKTS offers you the “best available” seats for that show. This means seats with the best view, rather than the least expensive.

Tickets purchased at TKTS booths are priced from 20% to 50% off normal ticket prices.

Outside the ticket booths, there will be a billboard with available shows. Shows that are available are also listed on the TKTS website. You also can download the TKTS app here.

Note: The tickets offered are the seats available for purchase at that time. Since your first choice may not be available as the lines are long, it is advisable to have a list of a few shows that you would like to see.

For more information, see our detailed post about using TKTS to get discount Broadway tickets. 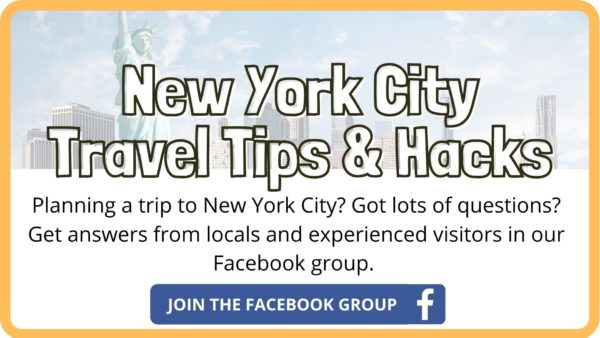 As the name suggests, these lotteries let you enter your name in a contest to win the chance to buy deeply-discounted tickets for that night’s performance.

To enter an in-person lottery you must go to the box office about 2 to 2.5 hours before curtain time.

At the theater, you will fill out a slip of paper with your name and the number of tickets you want, and hand it to the theater staff taking the slips. About 30 minutes later winners are announced.

If your name gets picked, you get to buy tickets priced between $25 and $35 and are usually in the front half of the orchestra.

Tickets for many shows are available through ticket lotteries accessed online via a website or app.

As the name implies, it is a lottery system, so there is no guarantee you will get tickets for that night’s show.

If you do win the lottery, tickets usually cost between $30 and $49 depending on the show. Hamilton is currently offering $10 lottery tickets. 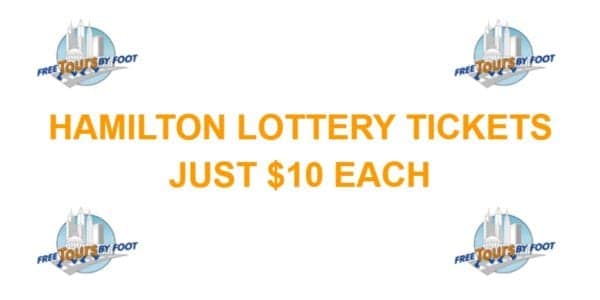 To increase your odds of seeing some show that evening, you can easily enter several lotteries for different shows.

Also, some individual Broadway shows have their own ticket lottery on their website.

Here are just a few of the shows that participate in digital lotteries:

TIP: If you're interested in seeing The Lion King, you may also want to consider taking a Disney on Broadway tour which includes an opportunity to try on actual costumes and props from the musical!

Rush tickets are tickets that you can purchase at the box office on the day of the performance.

There are a few different types of ticket rushes, but in general, Rush tickets go on sale when the box office opens, generally, 10 am, but check that theater’s website or call the box office to double-check.

Here is a sampling of shows with Rush tickets:

The pros and cons of trying for Rush tickets are straightforward.

The prices (between $27 to $45) cannot be beaten. But the downside is that it requires some time and effort on your part to get Rush tickets.

Theaters have a very limited number of Rush tickets each day and they are sold on a first-come, first-served basis.

Some people actually line up at the box office for popular shows as early as 5 or 6 am!

Still, if you have the time to wait in line, you can get a great deal on tickets to a Broadway show.

TIP: TodayTix allows you to try for Rush tickets via their app so you don’t need to go to the theater first thing in the morning. Be aware though that Rush tickets, whether in person or via an app, go fast.

This is exactly what it sounds like. Instead of a seat, you are buying a numbered spot to stand just behind the last row in the orchestra section.

Standing room tickets are often as inexpensive as $27, but are limited in number and sell very quickly.

For very popular shows, a line will form for SRO tickets as early as 5 or 6 am the day of the show.

Many box offices do not sell standing room tickets until 2 hours before curtain, but it varies from show to show.

The best thing to do is call or stop by the box office of the show you would like to see and ask what their procedures are.

The biggest advantage of trying for SRO tickets is that if you manage to get one, you will save a lot of money to see a show with a pretty good view.

The downside is that you will have a spot - not a seat. This is not a good option for you if you don’t want (or are unable) to stand for a long period of time.

Some Broadway shows are well over two and a half hours with intermission.

Another con is that waiting in line for an SRO ticket does not guarantee you will get a ticket and you will have just spent most of your day sitting in a street in the Theater District for nothing.

SRO is probably not the best way to get cheap tickets unless you have lots of time to spare and can stand for two hours or more.

Additional information on shows with SRO tickets can be found at the Broadway for Broke People website and the Broadway World website.

Also, it is also advisable to check with the box office for individual shows.

Though the odds are low, some people can't make it to the show and call the theater to let them know they can't make it. These tickets will then become available for purchase.

Any ticket cancellations are released shortly before the show start time. If you line up at the theater, you may be able to get one of these canceled tickets.

Bear in mind that there won't be a whole lot of cancellations, but that there will be other people hoping to get a canceled ticket.

Your odds of success are better if you can arrive at the theater several hours before showtime.