London has been home to great literary authors for centuries. There are locations all over town connected to various authors and their works but this self-guided tour focuses on the area of Chelsea. Well known today for posh shops and celebrity haunts, Chelsea has been home to some of the biggest literary figures to ever live in London. This tour will take you through the charming side streets of Chelsea, along beautiful Georgian terraced houses and along the River Thames, which will have you walking in the footsteps of some of your favourite poets, authors and playwrights.

Give yourself a solid 1.5 – 2 hours for this tour. You may want to take it at a slower pace and stop in at a put (or three!) along the way. The tour will finish with a walk down the famous King’s Row which means you can get in some shopping at the end if you’d like! 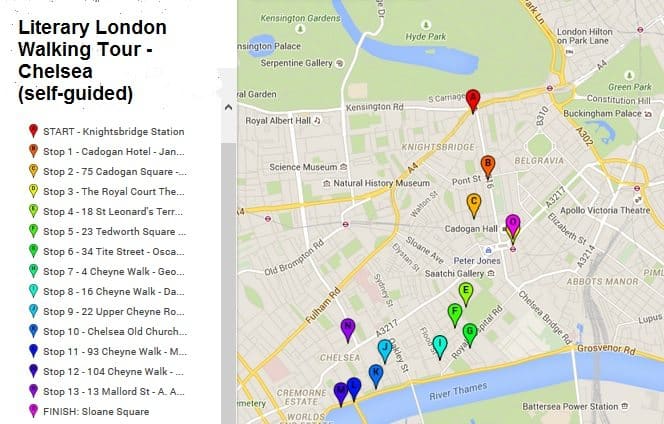 Take the EXIT onto Brompton Road and make the first RIGHT onto Sloane Street. Walk down until you reach the Cadogan Hotel at Number 75. Jane Austen (1775 – 1817) is better known for living in the spa town of Bath in the English countryside. But when she visited London in 1795 it is known that this is the hotel in which she stayed. So if you are an Austin-lover who can’t make it out to Bath, this will give you the Jane connection right here in London.

100 years after Jane’s stay, in 1895, it was here that Oscar Wilde was arrested and taken into custody for a trial that would charge him with gross indecency – a case that he would eventually lose.

Continue in the same direction down Sloane Street and take a RIGHT onto Cadogan Gate. When the road dead-ends take a slight RIGHT turn then immediate LEFT onto Cadogan Square. Look for Number 75.

Best known as a novelist, Arnold Bennett (1867 – 1931) was also a journalist and film maker. He lived in multiple residences in London and died in his house at Baker Street, but he spent a portion of his life living here in Chelsea.

Go back on yourself until you get back to Sloane Street. Turn RIGHT. When you get to SLOANE SQUARE, turn LEFT. Continue on this road that curves around Sloane Square and you will see the massive frontage for The Royal Court Theatre.

Best Known Works: Look Back in Anger, The Entertainer

With your back to the theatre, walk FORWARD, past Sloane Square, onto King’s Road. Walk down until you get to Walpole Street and turn LEFT. When the road dead-ends at the small park, take a RIGHT onto St. Leonard’s Terrace. Stop at Number 18. Bram Stoker (1847 – 1912), born in Ireland, made himself a home here in London after moving here in 1878. Making friends with big-name Londoners like Sir Arthur Conan Doyle meant that Bram quickly became involved in London’s highest societies – landing him a home in the prestigious Chelsea neighbourhood.

With your back to the park, continue down St. Leonard’s Terrace by going LEFT. Then take a LEFT onto Ralston Street. Make the first RIGHT onto Tedworth Square. Stop at Tedworth Court at Number 23. Born Samuel Langhorne Clemens, Mark Twain (1835 – 1910) was an American who had a great love of Europe and London in particular. Throughout his life he lied on and off here and resided in Chelsea at this location for a year: 1896 – 97. Twain only moved back to the United States whene his daughter fell ill and they wished to seek medical treatments there – otherwise he perhaps would have stayed a Londoner!

Continue down along Tedworth Square and make the first LEFT onto Tite Street. Walk straight down until you get to Number 34. Poet, playwright, author and wit, Oscar Wilde (1854 – 1900) was born in Ireland but travelled the world throughout his life, which was cut short when – weakened from a prison stay with hard labour – he died in Paris at the age of only 46. Wilde lived in Chelsea for quite some time, first at Number 3. Tite Street and later at 34. It was here that Wilde wrote The Picture of Dorian Gray and also in this house where he was first introduced to Lord Alfred Douglas, which would eventually lead to his downfall.

Best Known Works: The Importance of Being Ernest, The Picture of Dorian Gray, Lady Windermere’s Fan, An Ideal Husband, De Profundis, The Ballad of Reading Gaol

With your BACK to Number 34, go back on yourself LEFT. Take the first LEFT onto Royal Hospital Road. Further down on your RIGHT will be Cheyne Walk.

Born Mary Ann Evans (1819 – 1880) George Eliot was the penname chosen by Mary so that readers would not know she was a woman and judge her books accordingly before they had read them. Mary lived in Chelsea only a short time – she moved here with her newly wedded husband (20 years her junior!) in 1880 but she shortly fell ill and died at this house at the age of 61. She is buried in London at Highgate Cemetery.

A founder member of the Pre-Raphaelite Brotherhood, Dante Gabriel Rossetti (1828 – 1882) was said to be the inspiration to other poets and authors like William Morris and Edward Burne-Jones. He was a major precursor of the Aesthetic movement and enjoyed illustrating and painting as much as writing. Rossetti lived in Chelsea for two decades where he lived after his wife died. He also shared his house with two wombats who made up the table centrepieces during meals at his house! Later he included a llama and toucan to his household menagerie.

Now take yourself back down to the Chelsea Embankment on the edge of the Thames. Walk with the River on your LEFT and take a RIGHT onto Oakley Street. Then make a LEFT onto Upper Cheyne Row.

James Henry Leigh Hunt (1784 – 1859), known as Leigh Hunt, was born in the London area of Southgate to American parents. Leigh started his literary career working in journalists offices in London but soon became well known for his essays poetry and periodicals. He died in London and is buried at Kensal Green Cemetery.

Continue in the same direction down Upper Cheyne Row and make the first LEFT onto Cheyne Row. Walk down until you get back to Cheyne Walk and make a RIGHT. This brings you to the River again and here turn RIGHT and you will come to the church. The oldest figure to appear on the list, Sir Thomas More (1478 – 1535) was a social philosopher, statesman and author. More was a huge figure at the court of King Henry VIII and held the roles of Chancellor of the Duchy of Lancaster, Speaker to the House of Commons and Lord Chancellor. More was strongly opposed to the Protestant Reformation, which would eventually lead to his downfall and execution. He maintained a house here in Chelsea for decades, not too far from this church where he is known to have worshipped.

Get back on the edge of the river. Facing the Thames, turn RIGHT and keep the River on your left. Follow along until this road turns into Cheyne Walk again and stop at Number 93 on the right.

Born Elizabeth Clegorn Gaskell (1810 – 1865), Mrs. Gaskell as she was known, was a novelist and short story writer in the Victorian age. Gaskell was a Londoner and it was in this house that she was born in 1810, the youngest of 8 children, but only one of two who survived infancy. She was born in Chelsea but raised with her grandparents in Cheshire where she eventually settled down.

Continue in the same direction toward Number 104.

Born in France, Joseph Hilaire Pierre Rene Belloc (1870 – 1953) was brought to England at age two and lived out the rest of his life in this country. In addition for penning great works, Belloc dabbled in politics, serving as a Member of Parliament, and he graduated from Balliol College, Oxford. A strong, forceful personality of very sturdy build, Belloc’s nickname was “Old Thunder!”

Best Known Works: The Path to Rome, Cautionary Tales for Children, Matilda, The Romance of Tristan and Iseult.

For the last time, continue down Cheyne Walk and then take a RIGHT onto Milman’s Street. Follow the street until it starts to curve right and turns into King’s Road. Take a LEFT onto The Vale and then the first RIGHT onto Mallord Street. Walk until you get to Number 13. Born in London, A. A. Milne (1882 – 1956) brought happiness to people the world over though his creation of the teddy bear Winnie-the-Pooh. He had already been a playwright with a successful career before the Winnie-the-Pooh success came in waves and overshadowed all of his previous works. Milne moved here to Chelsea after being discharged from the British Army in 1919 and lived here well into his old age.

Continue down Mallord Street and make the first RIGHT onto Old Church Street and then the first LEFT onto King’s Road. Now simply continue on along King’s Road until it brings you back to Sloane Square Station.

Stephen is the CEO of Free Tours by Foot and has overseen the transformation of a local walking tour company into a global tour community and traveler’s advice platform. He has personally led thousands of group tours in the US and Europe, and is an expert in trip planning and sightseeing, with a focus on budget travelers. Stephen has been published and featured in dozens of publications including The Wall Street Journal, BBC, Yahoo, Washington.org, and more.
Updated: May 24th, 2015