The Lower East Side is known for its blend of cultural diversity and rich history. It's also known for its great food. Our food tasting tour is the perfect way to discover this fascinating neighborhood.

Where can you find a historic Synagogue next to a Bulgarian punk discotheque, trendy boutiques that sit comfortably beside decades-old "Mom and Pop" shops, or tenement apartments interspersed between luxury high rise condos?

Look no further than our Lower East Side Food Tour to discover America's great Melting Pot! 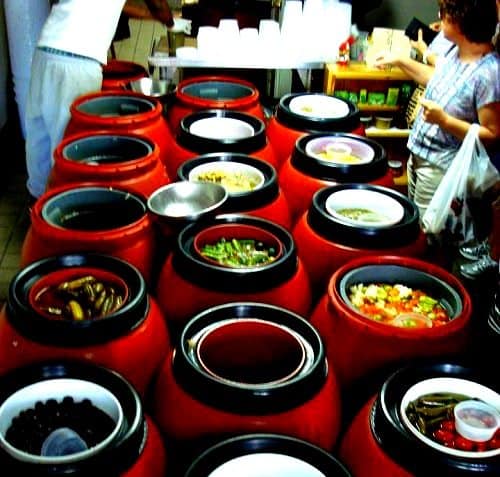 The streets of the Lower East Side tell the tales of struggling immigrants - Eastern Europeans, Russians, Germans, Puerto Ricans - who came to America in search of opportunity.

They brought with them recipes from the 'old world' and you can still taste these foods today. Ever eat a potato knish? How about a bialy or pretzel? Care to try a green tea doughnut?

Not in the mood for something exotic - no worries - we'll grab some of the best Chinese dumplings in New York City and we will pick up some pickles along the way. Join Free Tours by Foot as we visit historic synagogues, check out the area's latest in arts and architecture, learn about life in the tenements, and master useful Yiddish phrases, all while refining our palates with delectable treats from around the globe.

At the food shops, YOU choose what treats you would like to nosh (that's Yiddish for 'snack on'). Try them all or none at all.

Reservations: REQUIRED. Click here to reserve. Groups of 5 or more should visit our groups' page.

Where: Outside Yonah Schimmel's Knish Bakery, 137 E. Houston St. Look for your guide with the Free Tours by Foot logo.  Please use our Google map for directions to the start of the tour.

If our schedule doesn't work for you, take a look at our self-guided Lower East Side Food Tour, which includes many of our food stops as listings.  If you are planning to get a tourist pass, other LES Food tours are included in the New York Pass.  Read our post on whether the New York Pass is worth it for you.

Cost: This tour is free to take, and you get to decide what, if anything, the tour was worth when it's done. A name-your-own-price tour is a tour for anyone's budget. The suggested sampling cost is $8-12, depending on your appetite.

The dumbwaiter is one of the oldest in the city. The tin on the ceiling is original. This iconic Jewish New York eatery also has egg creams, latkes, kugel, and many more delights.

Let your guide tell you what these foods are and help you decide what you'll like the most.

It's also where Harry met Sally. Read more about this NYC phenomenon here. This landmark 'appetizing' shop opened in 1914. Appetizing (in this case is a noun, not an adjective) is a Jewish food tradition among American Jews.

Proof of just how good the food is at Russ and Daughters is the fact that, after 100 years, it is still open - and quite crowded as well. Luckily, they opened a sit-down cafe in 2014 located at 127 Orchard on the 100th anniversary of Russ & Daughters.