This post is a how-to guide to public transport in Berlin, including tips on tickets, tourist travel passes and an explanation of the zone system.

In the following sections, we detail the various ticket options available to you for access to Berlin's trains, buses, and trams.

However, most visitors to the city probably end up with a tourist discount pass.

Several Berlin tourist discount passes include either AB or ABC zoned travel cards as a part of their packages.

Some discount passes offer the transportation portion to be an add-on purchase.

Regardless of which pass you might choose, you will be entitled to unlimited travel for the duration of your pass and you won't have to worry about buying any transportation tickets during your stay. These passes also offer the holder either free or discounted entry to popular Berlin attractions and tours and also include discounts on restaurants.

Particularly the discount cards, such as the Berlin Welcome Card, are almost as inexpensive as buying daily unlimited travel passes. We recommend that you consider one of these options.

Berlin Fare Zones A, B, and C

Berlin’s transportation network is divided into 3 fare zone, which you could see on the map below.

Zone A, where the overwhelming majority of tourist sights are located, makes up the center of the map. If your accommodation is rather central and you are looking to see the main typical sights in the city, an AB ticket usually suffices.

There are 3 reasons a visitor might purchase the ABC or the BC tickets.  First, if you are traveling e.g. from or to the Schonefeld Airport, you will at least need to have Zone C on your ticket to and from the airport. Tegel Airport falls within Zone B.

The other two main reasons are you would like to visit Sachsenhausen Concentration Camp or to visit Potsdam, both of which are located in Zone C.

First things first, if you are planning to use Berlin's mass transit at least 3 times in one day, you will probably be better served to have a pass.

We recommend the tourist passes, as they include unlimited rides for just a slightly higher price than the daily unlimited travel cards listed below and you won't have to ever buy a ticket in Berlin. 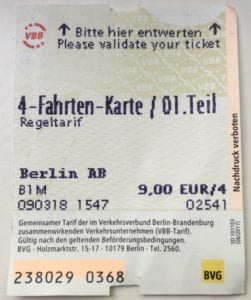 Children aged 6-14 ride for the reduced rate and children under 6 ride for free.

For occasional travel, the single ticket is fine, but it's probably better to buy the 4-trip-ticket, which are actually 4 single tickets costing you only a total of €9.00 (AB), a savings of €2.20.

But more importantly, it will save you from stopping at the machines each time you ride.

There are cheaper short-trip-tickets called Kurzestrecke Karten, which allow you to ride the S and U-Bahns for 3 stops and buses and trams for 6 stops and cost €1.90 (€1.40 reduced) per ticket, but the savings may not be worth the risk if you decide you want to travel further.

Since you are probably spending all day sightseeing, it might be worth getting an unlimited travel day or multiple-day pass. Passes run from the date of validation until 3 am of the next day.

As we mentioned above, you could also get a tourist discount card for about €5 more than the passes listed below.

There are a few things to keep in mind before riding.

First, be sure to have a ticket and validate it before getting on-board an S-Bahn, U-Bahn or Tram!

There are random ticket checks on the trains, and these lads who check, work on commission, so they won’t care much that you just didn’t know better.

Getting caught without a ticket will cost you €60 and some hassle.

But the user experience is the same and it's very easy to figure out.  There are multiple languages to choose from including English. It is possible to buy a ticket on a bus from the driver and there are vending machines on Berlin trams, but be sure to have either exact change or small bills for the bus, as there is a limit on how much change you will get.

On trams, you can only pay with coins.

Second, some machines do not accept international credit cards, and sometimes they don't accept any credit cards, so be sure to have cash with you as a backup (or take our advice and get a tourist pass).

80% of S+U stations have an elevator or handicapped access, and getting onto a bus or tram with a wheelchair or stroller is not a problem.

Don’t be taken aback by the different types of transportation.

As we mentioned already, they are all covered under the BVG (Berlin Transportation Service), so with a valid ticket or a valid tourist pass, you can ride them all and transfer between them.

Berlin’s transportation system works day and night. The trains and buses run at least every 20 minutes during the daytime, and in the center, trains run more frequently.

At night the service is a bit more limited.

On weekdays, S-Bahn and U-Bahn trains run from approximately 4:30 am until 1:00 am the next day, but there certain night buses that take on that route.

On weekends both run 24 hours.

The S-Bahn is a train/subway system to master long distances in a short time – like an express subway.

There is the ring line, the East-West-corridor, the North-South-line (underground), and the lines that go to the outer neighborhoods or cities outside Berlin like Potsdam, the capital of the state of Brandenburg. The U-Bahn is the classic subway (sometimes elevated though) for more local travel. The subway–lines criss-cross Berlin and some lead to places outside the city as well.

Subways run 24/7 on Fridays through Sundays and the nights before official holidays. U-Bahn lines are named, for example, “U1” or "U2" and so forth, and U-Bahn stations are marked with either a standalone U or a U followed by the name of the station, as in the image below. Berlin runs an extensive, efficient and reliable bus service throughout the city. The regular  “100” and “200” buses are often double-deckers and unite many of the interesting sights, and in a way, these buses operate as free tourist buses.

In the 1950s, people were very optimistic about the future of automobile transportation. So, in the former West-Berlin trolleys were seen as outdated and abandoned.

In the former East Berlin, the “capital of the German Democratic Republic”, the authorities were not so fast. The system had failed to provide its people with enough cars anyway and thus public transport was more important and the trolley system was kept alive.

In the Eastern neighborhoods, you find a dense system of trolley lines “Straßenbahn” that are marked “Tram 12”. They Strassenbahn works on the same ticket information we provided above and you can use all tourist passes as well.