This post is a preview of the Topography of Terror Museum.  Berlin is a city with an extremely troubling past. As the location of the Nazis rise to political power, Hitler’s command center during World War II, and a fractured city split into two by the Cold War-era Wall, modern Berlin has many difficult tales to tell. Any visitor to the German capital would be remiss if they failed to take in at least one museum or memorial to the horrors of the recent past, and the Topography of Terror aims to provide a comprehensive and clearly organized account of the factors that led to Nazi military aggression, the Holocaust and the Berlin Wall.

History of the Museum

Visiting the Topography of Terror

The museum is located at Niederkirchnerstraße 8, 10963 Berlin. The closest public transportation stops are S+U Potsdamer Platz (S1, S7, U2), U Kochstraße (U6), or S Anhalter Bahnhof (S1, S7). The museum is just a short walk from each of these stations.  We recommend using this Google map link for directions to the museum. Hours and Timing: Open daily from 10am – 8pm (except for December 25, 31 and January 1). Prepare to spend at least 2 hours here for a thorough visit of the site and exhibitions.

A visit to the Topography of Terror can be a truly chilling experience, as one must confront the evil that took over Germany while standing at the site of countless abuses against human dignity. However, it can also be a chance for catharsis, and a catalyst to remember the Nazi horrors while vowing to never let them repeat again. The vast majority of visitors highly recommend the experience to anyone, both foreigners and locals alike. The Topography of Terror Documentation Center is a free museum located both in and outdoors on the former site of the Gestapo and SS headquarters and the Reich Security Main Office.  These were the principal security agencies responsible for policing, forced labor and maintaining despotism under the Nazi regime. Nowadays, little physical evidence of its dark past remains on the site, as allied bombs damaged the buildings in 1945 and its remnants were torn down by 1956.

Part of the site is situated along Niederkirchnerstraße, formerly Prinz-Albrecht-Straße, which was the border between the Soviet and American sectors in postwar Berlin. As a result, the Topography of Terror is home to the longest stretch of the Berlin Wall in the city center. The new Documentation Center and Grounds were finished in 2010. The simple and airy architecture allows visitors to view the primary exhibit, the former site of the terror institutions, from every position within the building and provides a solemn background for the displays. The museum now houses three permanent exhibitions, as well as hosting regular temporary exhibits, lectures and educational programs.

The Topography of Terror Documentation Center and Terrain houses three permanent collections.  The primary permanent exhibit describes the institutions of terror formerly located at the site, their victims, and roles within occupied Europe.

“The Topography of Terror: Gestapo, SS and Reich Security Main Office on Wilhelm- and Prinz-Albrecht-Straße.”

This exhibit is divided into three main thematic sections over 800 square meters, describing the Nazi regimes institutions of terror, their victims, and roles within occupied Europe. It allows visitors to gain a multi-faceted understanding of these topics through contemporary pictures and documents.  The exhibit has 5 chapters: The second permanent exhibit (outdoors) is entitled “Berlin 1933-1945: Between Propaganda and Terror” and describes the role of the capital under Nazi rule, including how they managed to gain control of the city and the after-effects of the regime. It is located along the excavated cellar walls of the original building and below the longest remaining piece of the Berlin Wall in central Berlin. The outdoor exhibit is open between spring and fall only, and is closed in winter.  The exhibit comprises 5 chapters: The excavations along the ‘Berlin 1933-1945: Between Propaganda and Terror’ Exhibit

Finally, the third exhibit encompasses an outdoor tour of the grounds, called the “ToT: Site Tour in 15 Stations.” It provides an overview of the site and the institutions it housed, as well as its conversion in the post-war era as a location for the Berlin Wall.  It is designed to be a complement to the indoor exhibit.

The museum also hosts a special exhibit that covers related content that is not specific to the museum's location. The current exhibit is called "March Formations. The Nazi Party Rally Grounds in Nuremberg" and it covers the Nazi Party's use of architectural propaganda to instill enthusiasm in the German people for its cause.  The centerpiece of the exhibit is a large urban model of the Nuremberg parade grounds designed by Albert Speer, the Nazi Party's chief architect. 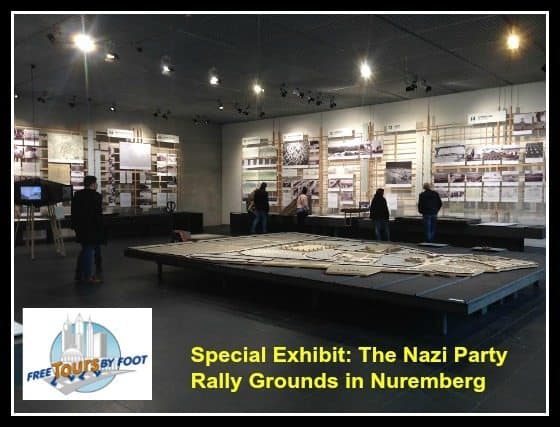 Past Special Exhibits Include:

History of the Documentation Center

The museum was founded in 1987 by a grassroots team of archaeologists and historians who discovered the basement remains of the Gestapo as they dug around the bomb craters of the city. They began by designating the site as a memorial to all those killed by the Nazis, and an informal museum soon followed. By 1989, one of the earliest partnerships between then-East and West German researchers was established, and in 1992, only two years after reunification, foundations were laid for a permanent museum and commemorative site.

However, these underpinnings were not to be completed. For twelve years the project sat dormant, and exhibits and displays were housed outdoors in tents and informal spaces. By 2004, these unfinished foundations were demolished and a competition was held to choose a new architect and design for this most important of museums. Out of 309 architects who submitted designs, 23 were short-listed and German architect Ursula Wilms was selected as the winner. Between 2007 and 2010 the structure was completed, and opened to the public in a solemn ceremony on May 6, 2010 – the 65th anniversary of the end of World War II. Careful attention has been paid to ensure that this site in no way glorifies the site’s history or exalts the perpetrators who worked here.

There are many popular Berlin attractions nearby, so it's easy to plan a half or full day in the area.  Below are the most popular.