Things To Do in Bairro Alto and Chiado

This post will cover some of the most interesting things to see when you visit the picturesque Bairro Alto and Chiado neighborhoods in Lisbon and is organized as a self-guided walking tour. What is Bairro Alto and Chiado?

The Bairro Alto is an unofficial district of Lisbon made up of a series of quaint streets on a steep hill. Words like bohemian and colorful are often used to describe it.

It was first constructed in the 16th century to house the ship workers and sailors of the city.

Today the streets tend to be quiet during the day and come alive at night with restaurants, bars, late-night-shops, and Fado houses bringing a festive spirit to her streets. Chiado is first and foremost a shopping district, with designer labels adorning storefront throughout the district. Nevertheless, most of the sites on this tour are located in Chiado.

And like its next-door neighbor Bairro Alto, Chiado also has a lively nightlife, including high-end theater and opera.

There are several ways to get to either neighborhood and it really depends on where you want to start. 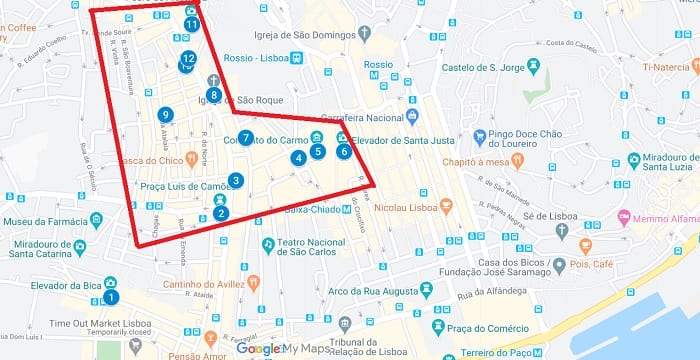 Although we start this self-guided tour from the Elevador da Bica, one of the city’s 3 funiculars, you can also take Tram 28 to reach the same starting point in Chiado.

You can also discover the area by taking part in one of the many free walking tours that depart daily from Praça Luís de Camões (#2 on our list).

This funicular (tram) runs from Rua de São Paulo to Calçada do Combro/Rua do Loreto.

It departs every 15 minutes carrying locals and tourists up the steep and graffiti lined hills of Lisbon to the Chiado/Bairro Alto and Bica neighborhoods of the city.

The entrance is a bit difficult to find. Look for the sign over the arch on the building of #234 on Rua de São Paulo. Choose the front or rear for the best view of the graffiti lined streets.

Your Viva Day Pass or Lisboa Card allows you to board for free and without waiting in a queue. Single rides are. €3.80 return

Although it may lack the grandeur of other squares in Lisbon, Praça Luís de Camões, also called Largo do Camoes, is a favorite meeting spot for locals.

The cobblestone ground is full of images of ships and mermaids, and in the center of the square stands a bronze statue of Luís de Camões, considered Portugal’s greatest poet.

At the bottom of this monument stands eight other figures from Portuguese literature representing the love the Portuguese have for the written word.

Don’t miss the Pasteis de Nata (custard tarts) from either Manteigaria or the award-winning Pastelaria Batalha, both on the square.

Fado music originated in Portugal in the 1820s in the Bairro Alto, Alfama, and Mouraria districts.

The style is one of melancholy or mournfulness with song lyrics that often grieve that which was lost or are nostalgic for the past.

Live Fado at Tasca Do Chico

It was the music of the poor – sailors, dock workers, fishwives and others from the working classes.

Although Fado in Chiado is the most recognized spot to experience Fado music in the area, it has a significant cover charge.

A more authentic Fado can be found in a smaller bar, one with no cover charge, called Tasca Do Chico. Reservations are suggested.

Chafariz do Carmo sits in the center of Largo do Carmo, a historic and picturesque square and one of the most popular in Lisbon.

Flowering trees from South American, Jacarandas, fill the square, providing shade to those who relax beneath. This freshwater fountain is cherished because it managed to survive the great earthquake of 1755.

Four pillars rise to meet four arches, while inside dolphins sit atop the fountain itself, in a style of baroque and classical.

Just off Largo do Carmo one finds the ruins of the gothic Carmo Convent, a monastic complex destroyed by the great earthquake of 1755.

5,000 books and all of the church’s artistic and religious creations were lost as well, and residing clerics were forced to abandon the building.

Over time various restorations and repairs were made, then stopped in 1834, when religious orders were abolished in Portugal.

This left the naves and transept uncovered and chapels incomplete, with walls and buttresses left open to the sky.

Today an archeological museum resides in the church’s nave and there are exhibition rooms in the apsidal chapels.

Tombs of great figures such as King Dinis I (from the early 14 century) and King Ferdinand the I (from later in the same century) can be found on-site, as well as some beautiful and very old artifacts.

The most ornate, neo-gothic elevator you have likely come across, the Santa Justa lift, now at over 100 years old, was built to transport folks from lower to upper Lisbon.

The designer was a fan of Gustav Eiffel and sought to emulate the Eiffel Tower with this wrought iron structure. One makes the trip in a wood decorated elevator car, up to one of her two levels.

For €1.50 more you can head up an additional two stories to the Viewing Deck.  It’s here you’ll find an unobstructed 360-degree view of Lisbon, including Alfama and the Castle of St. George in the distance.

If you are already at the top in the Largo do Carmo area, you can directly enter the top-level through a series of stairs.

Entrance this way tends to be much faster, skipping the long lines that form for the elevator. Access this way is free.

This historic restaurant, residing in a 13th-century convent, is popular with locals and tourists alike.

After religious orders were abolished in Portugal, this space became a beer hall and even today beer is brewed on the premises.

Orange and gold ceiling slope overhead and family-style tables line the room, and it’s here where you sit and enjoy traditional Portuguese cuisine including seafood, meats, desserts, and regional wines.

The restaurant suggests calling if you’d like to discover their dish of the day, served Monday-Friday at lunchtime.

The austerity on the outside of this church belies the extravagant beauty found on the inside.

The church, still active, was originally built to house a relic from Saint Rocco.

Because of his healing of victims of the plague, King Manuel I believed that this relic might protect his people from the Black Plague.

A group established to care for the church, the Brotherhood of St. Roch still exists and maintains the church to this day.

In the early 1900s, a museum was adjoined to the church. Here one finds religious artifacts, an art collection, paintings, sculptures, and a collection of reliquaries donated by a member of the Borga family.

9. Museum of Freemasonry in Portugal 10. The Solar do Vinho do Porto (run by the Port Wine Institute)

If you like Port, you’ve died and gone to a relaxed and casual heaven. Think wood-beamed ceilings, comfy oversized chairs, and every type of port you’ve ever wanted to try. The waiters present you with a listing of ports ranging from €2/€3 – €20 a glass. Bottles can be purchased as well. One can match your port with a cheese and snack on nuts.

While construction has been ongoing for years, it’s well worth making a stop at the often serene terraced garden.

It allows for one of the most panoramic views of Lisbon, with São Jorge Castle and its walls, the Alfama neighborhood and city center (Baixa), and the ocean in sightlines.

The garden was laid out in the 19th century. In the lower garden, one finds lawn beds separated by walkways and benches.

Dotted across the garden are the busts of known Portuguese figures, and small fountains line the walls.

There is also a drinks and snacks kiosk with seating.

The upper level, cobblestone and tree-covered, also has benches and an even larger drink and snacks kiosk with outdoor seating.

At times a street market is set up, with vendors selling handmade art, home decor, trinkets, and traditional Portuguese food. Don’t be surprised to find artists settled there to paint the cityscape as the wow factor can’t be beat.

Designed by the same man who designed the Santa Justa Lift, these cable cars carry passengers up and down the steep slopes of the city.

The graffiti painted trams descend a steep hill, running close to flats and local businesses, as locals walk the cobblestone sidewalks nearby.

Vania has lived in Portugal for 15 years, where she is a local photographer, writer, and mom to a beautiful daughter. She is a published author on many well-respected travel & hospitality websites including Restaurant Insider, Level Up, SevenRooms, and more.