Things To Do in Baixa

This post will cover some of the most interesting things to see when you visit the picturesque Baixa neighborhood in Lisbon.

In the heart of Lisbon lies the Baixa district. This low area between two hills of the city was rebuilt after an earthquake and tsunami devastated the area in 1755.

Today, Baixa, with its series of squares and classical avenues, is made up of restaurants, cafes, tourist-friendly shops, and art galleries, museums, and pedestrianized streets.

The district is rather long with several tram lines and Metro lines serving it. For simplicity’s sake, we will focus on the starting point of this tour (map).

The closest Metro Station is Terreiro do Praco (Az). Two other stations are within reasonable walks from the start, Baixa Chiao (Az) + (Vd), as well as, Cais do Sodré (Vd).

There are also numerous bus lines that service the area.

Cais do Sodré is a train station that connects the Baixa with Belem. If you are coming from that direction, there is also tram #18E. You could also take part in one of the free walking tours that cover this area.

The beginning of the Baixa tour starts at the Cais das Colunas (map).

This quay, named after the columns on its edge, was built in the late 1700s. The columns are said to represent wisdom and devotion. It was through these columns that dignitaries would pass through on their way to the castle, including Queen Elizabeth in 1957.

This plaza, in English known as the Square of Commerce, represents the wealth of Lisbon. It was here that finances and trade, much of it coming from the sea, thrived.

This square, along with the entire area of Baixa, was destroyed in the great earthquake and tsunami of 1755 but has been rebuilt to show the resilience of Lisbon’s people.

The statue in the middle of the square celebrates King Jose I, the ruler who oversaw this rebuilding, with he atop a horse trampling snakes at his feet.

The museum provides an audio and visual history of the city of Lisbon.

In only 60 minutes one is taken back in time to visit key events in six areas of her history, areas that have shaped the city into what it is today. An audio guide is included in the price of each ticket. Learn more on the official website.

This stone arch, erected over 100 years after the earthquake, standing to the edge of the Praça do Comércio is a symbol of Lisbon’s recovery.

Historical figures decorate the arch with those at the top representing Valor and Genius. Visitors can ride an elevator most of the way to the top and then climb the rest of the way. Here you’ll find amazing 360-degree views of the city.

Tickets can also be purchased ahead of time here.

This museum is housed in a former church.

Inside you’ll find displays covering the concept and evolution of money, a bank vault, a length of King Dinis’wall from the 13th-century, samples of money from both the past and from around the world, money-making equipment and more.

The Design and Fashion Museum (MUDE) includes the works of hundreds designers from around the world including such well-known icons as Charles Eames, Jean Paul Gaultier, and Yves Saint Laurent. Everything from furnishings to jewelry to couture pieces can be found within its fashionable walls.

Delightful is a word sometimes used to describe Lisbon’s antique trams. Tram 28E winds its way through some of the most popular tourist areas.

One sees the hills of Graca, then down to old quarter Alfama, across the downtown area of Baixa, towards Estrela, and finally ending in Campo Ourique in the historic center of Lisbon.

This tram is used by locals but gets packed by tourists. Wait times can be long.

A better price can be found with a 24/48/72 hour public transport ticket that covers all buses and trams. To read more about discount cards, read our post here.

Known by the acronym NARC, this site is another that takes you through 2,500 years of Lisbon’s development.

Beneath a bank lies the results of archeological excavations that took place in the 1990s including tanks belonging to a Roman fish sauce factory, ceramics, mosaic floors, Islamic ceramics, remnants of the earthquake disaster, and more.

Rua Augusta, a Moroccan tiled pedestrian walkway just off of Praça do Comércio, is surrounded by buildings that reflect the 18th-century Pombaline style of architecture.

This style came with a number of at-the-time innovative systemizations in the way structures in Baixa were put up and the streets and walkways laid out. 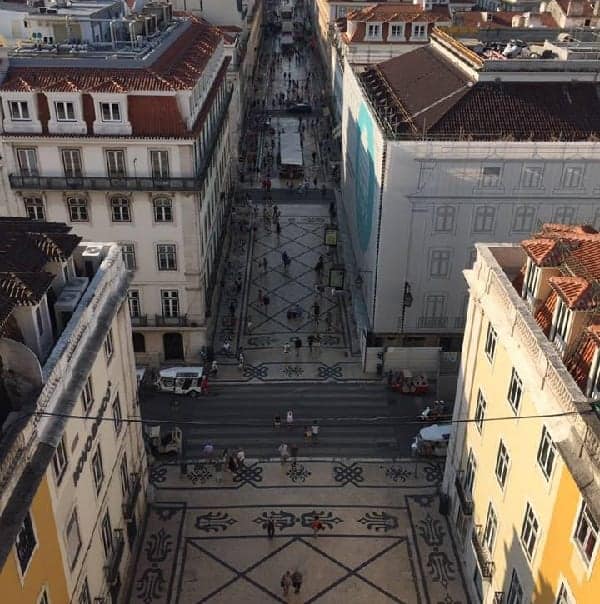 Most importantly, these buildings were constructed to prevent as much earthquake damage as possible, Baixa having been one of the most devastated areas after the 1755 quake and Tsunami.

Due to the economic conditions of the time, the facades in this style are more austere with little way of decoration.

It was only in the late 18th century that a more eclectic style of Neoclassical and Romantic started to make an appearance, seen at the end of the street in the Arco da Rua Augusta.

Exquisite ornamentation is the best way to describe what you’ll find in this still-active religious site.

This Catholic neo-classical/baroque church was built in 1762, replacing previous churches built on the same site.

The most ornate, neo-Gothic elevator you have likely come across, the Santa Justa lift, now at over 100 years old, was built to transport folks from lower to upper Lisbon.

The designer was a fan of Gustav Eiffel and sought to emulate the Eiffel Tower with this wrought iron structure. One makes the trip in a wood decorated elevator car, up to one of her two levels.

Discounts can be had with the Viva Day Pass or Lisboa Card. Get more information on the official website.

The square is in the center of Lisbon, both in location and in the heart of locals.

In the center sits a column dedicated to Pedro IV who briefly reigned over Portugal and then became the first ruler of what is now Brazil.

The bottom of the columns holds allegorical figures representing Moderation, Strength, Justice, and Wisdom, all attributes the King was said to possess.

Locals refer to the square as just “Rossio” (meaning common land). For 700 years a plaza has stood at this site, home to everything from bullfights to public executions.

Today one will find famous cafes, restaurants, shops… and a dizzying tiled pattern, much like waves, said to pay tribute to the city’s seafaring past.

Take Lisboa starts their free Alfama and Mouraria tour here and all of Live Lisbon Tours free tours begin from here as well.

For an overview of all free walking tours in Lisbon, visit our post.

Rolls with ham and cheese, pasteis de nata, cakes, fresh orange juice, can be found at  Mercado da Figueira, a bakery on the square that’s not to be missed. In a corner of the square stands a bronze statue of King John I astride a horse.

He served on the throne for 48 years, was celebrated for helping to preserve his country’s independence, and was known for his benevolence and wit.

It’s a little run down and it can be hard to find a seat when it’s busy. But it’s said to have a worn charm to it.

You’ll also find it a transportation hub and the place to pick up tuk-tuks, trams, and taxis. Tram 15E departs from here for Belem every 10-15 minutes.

You can also catch Tram 12E which heads up to Saint George’s Castle, which is an alternative to the more popular Tram 28E.

Igreja de São Domingos is the largest church in Lisbon and one first dedicated in 1241. It sits on Largo Sao Domingos square.

Here there have been royal marriages and christenings and other usual church activities.

The church itself has withstood two earthquakes and a tidal wave, including the one that devastated most of Baixa.

A fire eventually destroyed the interior of the church in 1959, closing the church for almost 40 years.

Today one finds the raw beauty of destroyed grandeur upon entrance.

The pillars holding up the roof are cracked and fire-scarred (one can still smell the odor of fire) and the plaster walls are damaged peeling.

Yet here, in a place bereft of the usual churchly perfection, one finds an intriguing mix of architecture styles and an atmosphere befitting such solemn grounds.

A Portuguese landmark, this small outdoor hole-in-the-wall shop is worth a visit. Here you’ll find Ginjinha, the traditional alcoholic drink of Portugal.

For €1.4 you can have a shot of this cherry liquor (Cherries fermented in Brandy, sugar, water, and cinnamon), served with or without cherries on top.

You’ll likely spot long lines although they move quickly. Read the reviews on its Yelp page.

16. The Estação do Rossio

This stunning train station, designed in the late 1880s, was built near and eventually named after one of Lisbon’s most popular squares, The Rossio.

At the time it was considered a feat of modern engineering, with tunnels that connected national and international trains to the center of the city. Horseshoe-shaped entrances, with intricate carvings of maritime motifs, line the entrance walls along with cast iron windows, cast iron being a new material at the time of its construction.

A small turret and ornamental clock crown the top of the building.

Trains leave often for Porto, Sintra, Rossio and farther-flung locales. Ticket machines can be busy, so at peak times it’s best to make an early start.

This monument, an obelisk, commemorates Portugal’s independence from Spain after 60 years of rule.

It was built in the center of Praça dos Restauradores square in 1886 and honors those soldiers who died during the various battles to restore sovereignty.

Statues symbolizing Independence and Victory are in this monument, one dedicated to the restorers of both.

Opened as a cinema to silent movies in 1931, this stunning example of art deco design is one not to be missed. Although parts of the building were destroyed due to neglect and eventual renovation, the original facade remains.

Designed by the same man who designed the Santa Justa Lift, these cable cars ferry city dwellers up the steep slopes of the city.

The tram climbs up past Graffiti painted walls, close to flats, quickly taking riders from Restauradores Square to one of the best spots in the city to get pictures.

Although one can walk from Restauradores Square up R. de Soar pedro de Alcantara, most chose to take the Gloria Funicular up the steep hill.

At the top one finds a (well-reviewed) cafe, a garden with seating, statues and one of the best views in Lisbon.

From here you can see the castle, the ocean, and the red roofs Lisbon dotted across the horizon.

Vania has lived in Portugal for 15 years, where she is a local photographer, writer, and mom to a beautiful daughter. She is a published author on many well-respected travel & hospitality websites including Restaurant Insider, Level Up, SevenRooms, and more.