Things to Do in Alfama, Lisbon

Alfama is one of Lisbon’s oldest neighborhoods. It sits on a hill overlooking the Tagus River and is characterized by mazes of steep, narrow streets.

You’ll find beautiful, brightly colored residences, as well as churches, and plenty of terraces and viewpoints from which to see the city centre.

PLAN YOUR VISIT TO ALFAMA

Alfama is one of Lisbon’s oldest and most photogenic communities in the city. It is known for its narrow, steep, and winding cobblestone streets.

You’ll find multiple scenic viewpoints that give you a bird’s eye view of nearby cathedrals, classic red roofs, and the Tagus River. It’s a place made for photos.

We suggest starting with one of the many free tours of Alfama available to you. Most tours run 2-3 hours.

We suggest planning a total of taking 4 – 6 hours to explore, which leaves time to grab some delicious food as well as go into a few of the churches and rest at a viewpoint.

Getting Here from Lisbon’s City Centre

If you’re starting in the middle of Lisbon, you won’t need to travel far to get to Alfama.

The trip should take between 5 and 20 minutes, depending on where you start.

We recommend starting your exploration of Alfama at the viewpoint furthest away from the river, Miraduoro da Graça (map), which is the first point on our map below.

The ride takes under 20 minutes with the tram from Praça do Comércio to Miraduoro da Graça.

The vintage Tram 28 is also a fun way to get around Alfama if you’re looking to go to the Castle or various cathedrals.

TIP: Public transport is included with the Lisboa Card.

The hop-on-hop-off bus is a great way to include Alfama in your Lisbon explorations.

Lisbon Sightseeing’s Castle Line includes several of the stops we have listed below such as the Castle, Lisbon Cathedral, and St. Anthony’s Church.

TOP 15 THINGS TO SEE AND DO IN ALFAMA

We have a list of the top 15 places to go in the Alfama neighborhood. The first 12 are laid out in a self-guided tour format, with the last 3 spots included as optional detours to take.

Here is a map, and below are some instructions to get you started!

Click on the image for an expanded and interactive map.

TIP: If you prefer being led by an entertaining guide, there are multiple daily pay-what-you-like tours of Alfama that you can book! Check out the list of companies below.

If you want a great vantage point from which to see the city, head up to Miraduoro da Graça. This terrace is a popular spot!

It has a few trees for shade as well as an open-air cafe which is great for giving your feet a rest.

The terrace sits on the hill above one of the city’s oldest Baroque churches and overlooks central Lisbon, the castle, and the river.

It’s easy to reach by walking or taking tram 28 (map).

2) Church of São Vicente of Fora

The church sits lower down on the same hill as the Miraduoro.

It was built in 1582 on the same spot as the old battlefield church monuments where Portuguese and European crusaders were buried.

Every Tuesday and Saturday there is a famous pop-up flea market called Feira da Ladra, or “Thief’s Market.”

If you’ve been walking for a while, you can take a breather in the small garden in the middle.

The National Pantheon is a beautiful example of Baroque architecture. It was inspired by Italian Renaissance design, which can be seen in the colorful marble and flowing shape of the walls.

The central nave has access to multiple tomb rooms where important national figures are honored, such as explorer Vasco de Gama and Fado legend Amelia Rodriguez.

Many writers, artists, former presidents, and military figures are also at rest here.

We also suggest making your way up to the terrace, from which there is yet another breathtaking view of Lisbon.

Here’s a short video of how wonderful the interior is.

The mural of Amália Rodrigues is one of the most well-known pieces of street art in Lisbon.

Known as the Queen of Fado, Amália Rodrigues was a Portuguese actress and singer who helped popularise fado all over the world. 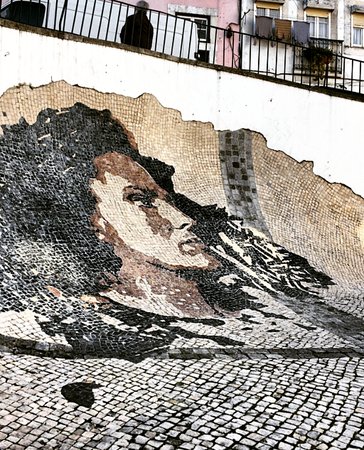 It is a mosaic that wraps up onto a wall, blending into the cobbled street immediately below it. Thanks to the way the mosaic pieces are laid, if you manage to see it in the rain, Amália looks like she is crying.

If you look closely, there are other murals of the singer around Lisbon.

This museum of decorative arts showcases the luxurious style of 17th- and 18th-century Portuguese interior design and art.

The 17th-century palace is full of breathtaking color and design. You’ll find preserved furniture, china and table settings, framed artwork and paintings, and other design staples.

There are even a few carriages, tapestries, and furniture from other places around the world.

Note that large backpacks and bags aren’t allowed inside. We have a full post on where you can store your luggage while sightseeing here.

TIP: Admission is only €3.20 with the Lisboa Card.

Alfama, situated on a hill and is full of prime lookout points over the city. Miraduoro das Portas do Sol is one of them that has a beautiful view of red rooftops and the Tagus River.

On a clear day, you’ll be able to easily see the hills and mountains on the other side of the water.

As you stand on the terrace, the São Vicente of Fora Monastery is visible as well.

If you haven’t had enough of impressive city views, Miraduoro de Santa Luzia is another terrace from which you can observe the beautiful architecture of Alfama as it slopes down toward the Tagus River. 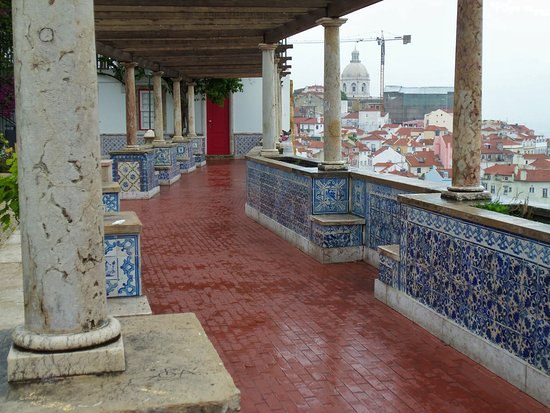 This photo of Miradouro de Santa Luzia is courtesy of Tripadvisor

The deck itself is covered with a trellis that supports beautiful vines during the spring and summer. It is also surrounded by decorative tiles and holds a small, calming garden and pond.

From here, you can spot multiple domes and towers of nearby churches.

The Castle was first established by Romans in 200 BC and was fortified, changed hands, or captured by other groups many times over the years, including the Moors and Crusaders.

It was also destroyed by an earthquake in the mid-1700s. The last major restoration project was completed in 1944.

This makes it one of the most historically significant buildings in the city!

The Downhill Lisbon Tour is a great option that includes admission to São Jorge Castle, Sé Cathedral, and the Cathedral Bell Tower.

If you’re only interested in St. George Castle, we suggest a skip-the-line castle ticket that includes a short guided intro before allowing you to enjoy exploring the rest at your own pace.

TIP: Don’t forget that the easiest way up to the castle – Tram 28 – is included in the public transportation perks on the Lisboa Card.

This Catholic church has been a part of the community since Alfama was an established neighborhood, though it was completely rebuilt before the mid-1700s.

The nave is ornately decorated, which makes the interior a must-see for visitors interested in religious architecture.

While all services are conducted in Portuguese, attending mass will also allow you a chance to hear the choir and enjoy the local community atmosphere.

Located in a former leather bag factory and a printing press building, the Museum of Lisbon stands over an archeological dig site and houses interesting artifacts and information about an ancient Roman Theatre. 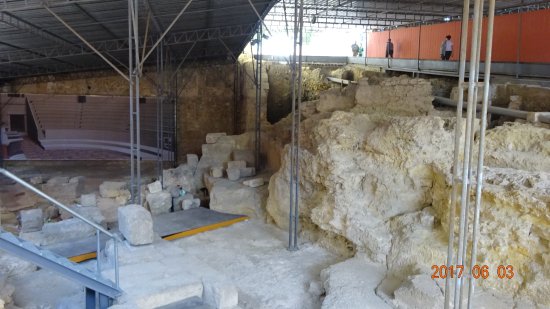 Stepping into the museum will take you back to when Emperor Augustus ruled over Lisbon, then called Olisipo.

In addition to the excavated ruins, there are also 3D models and videos of what the structure looked like when it was in use.

The Lisbon Cathedral, also known as the Cathedral of Saint Mary Major or the Sé Cathedral, is the oldest church in Lisbon.

It was built in 1147 but renovated and modified after a mix of earthquakes, fire, and the natural passage of time.

The mix of Gothic, Romanesque, and Baroque architecture is breathtaking, but the church also holds some impressive artwork.

That includes sculptures resting on tombs, intricate windows, and other embellishments and paintings.

This mid-1700s Catholic church was built on the spot where historians believe Saint Anthony was born.

Its beautifully bright exterior is complimented by high arched ceilings and a dome that lets in lots of natural light.

Rebuilt several times from its original 15th-century construction, The Church of Saint Anthony of Lisbon is now a national monument.

There is also a statue of the saint in the square in front of the church, which was blessed by Pope John Paul II in 1982.

The church’s crypt rests on his birthplace, where the home used to sit. You’ll also be able to see a canvas with Saint Anthony’s most authentic facial depiction.

If you’re in Lisbon on June 13, you can witness the annual procession that starts at the church and winds through Alfama for Saint Anthony’s “patron saint day.”

THE REMAINING STOPS ON THIS TOUR ARE LOCATED IN THE LOWER SECTION OF ALFAMA. YOU CAN SKIP THESE IF YOU WANT TO HEAD INTO THE BAIXA

The Museu Militar de Lisboa holds the world’s largest artillery collection and sits where a 16th-century shipyard once functioned.

The museum building itself is also a point of interest as a great example of lavish Baroque style.

TIP: Receive 20% off of admission prices with the Lisboa Card.

Museu do Fado celebrates Portugal’s best fado musicians and singers. Fado became popular in Lisbon in the early 1800s, though its roots go back even further.

Now, fado is an emotional, somber genre that can often be heard in Portuguese pubs and restaurants. The subject of the lyrics often revolves around fate, longing, and the sea.

The museum holds instruments – especially guitars used for fado – and artwork that illustrates how this music helped shape Lisbon culture.

There are interactive exhibits, audio guides, and occasionally live performances in the museum or the attached restaurant to help you understand this mournful genre.

If you email the museum ahead of time, you can book a guided visit in Portuguese, Spanish, English, or French.

TIP: Admission is €4 with the Lisboa Card.

Several companies offer tours that focus exclusively on Alfama and neighboring Mouraria, while other companies include Alfama as shorter parts of longer tours.

These walking tours are popular and affordable, thanks to their pay-what-you-like model.

There is no up-front fee to make a reservation or go on the walk! Instead, you pay what you feel the experience was worth at the end of the tour.

Sights and Topics on Most Tours Include:

On different lines, you can travel from viewpoints and the Castle of São Jorge all the way to the Belém neighborhood to the west.

You’ll see plenty of street art as well as learn about the Patron Saint of Lisbon.

Live History also offers a walk of some of the oldest neighborhoods in the city. They focus on the area’s multiculturalism and rebuilding after the great earthquake.

If you go on a Tuesday or Saturday, you’ll get to end up at the famous flea market.

On the other days, the Castle will be the endpoint.

Hi Lisbon’s tour will give you a great overview of the city’s 3,000-year history and the people groups who established the Alfama and Mouraria neighborhoods.

The guides also focus on today’s culture in these districts, as well as where to find the best food.