This is a guide to choosing the best time to visit Chicago, based on hotel prices, weather, events and activities, and crowds.

We provide a month-to-month comparison, with suggestions of the best events to attend on the month you plan to be here.

The best time to come to Chicago depends on what you want out of your trip.

If you want short lines and cheaper hotel and flight rates, and don’t mind cold weather, coming in January, February, or November might be the best choice for you.

If you want to visit Chicago in the summer to take part in food and music festivals, boat cruises, outdoor dining and rooftop bars, and beaches, June-August are the most popular months for tourists and locals looking to enjoy the best entertainment that the city has to offer.

If you want something in-between, coming in March-May or September-October means fewer crowds, average prices, and still plenty to see and do!

We break down the month-to-month guide in this article so you can take part in the best of Chicago no matter which month you decide to visit.

January-March were the cheapest times to book a hotel, and July-October was the most expensive.

Staying downtown will always cost more than hotels near the O'Hare or Midway airport, but you can learn how utilize Chicago’s public transportation near any hotel to get to our top attractions and neighborhoods. 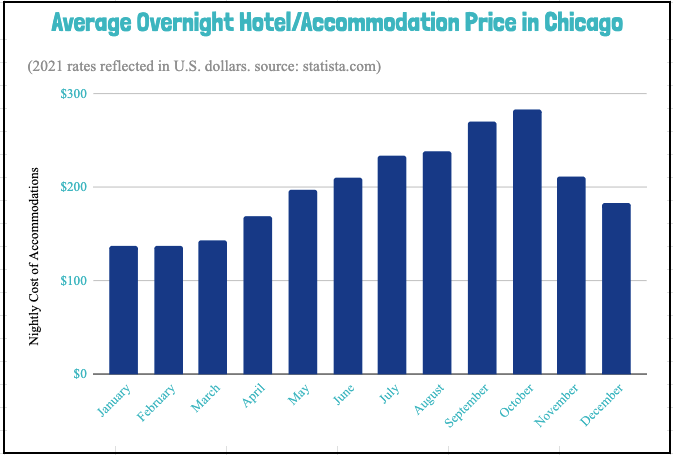 You can utilize sites such as Booking.com and TripAdvsior and filter the reviews for lowest price first.

Airfare cost is one of the top deciding factors for many of us when planning a trip, so using a tool like Google Flights is a great way to see the best times to save money flying to Chicago.

Here you can see a 5-day roundtrip cost from London to Chicago in August would cost you nearly double what the same trip would cost at the same time in September.

Here are a few tips when booking tickets:

It’s no secret that the Windy City is known for having both hot and cold seasons.

And it’s important to know what the weather will be during your trip to pack appropriate clothing.

Here is a breakdown of the temperature and weather conditions in Chicago in each season.

Most people enjoy the summer months the most, specifically late June through September.

But, there are two small periods of time in the year that are equally enjoyable, in late May and early October, when crowds are small and the temperature is comfortable.

Beginning in December the temperaturea begin to drop into the 30’s F, and stay in the range of mid-20’s F throughout January and February, our coldest months of the year.

Temperatures in March will return to the 30’s, but traveling with a winter coat, boots, hat, and gloves is a must during all winter months.

Light snowfall between 1-2 inches is typical.

Chicago springtime is only two months long, but it’s a beautiful time to see the city.

With comfortable temperatures averaging in the low 50’s during both April and May, you can pack a light coat and dress in layers.

Don’t forget your umbrella and rain boots, with as much as 3-inches of rainfall occurring 12 days out of the month.

Chicago has beautiful summers to make up for our long winters and wet springs, with an average high of 74F and low of 62F between June and September.

Autumn is a wonderful time to see Chicago.

The cooler weather of October and November with less precipitation means you can enjoy temperatures in the 40-50’s F without the snow or rain that begins in December.

Best Months to Visit the Museums and Indoor Activities

Chicago museums are open year-round for visitors to enjoy, and are an excellent option when the weather is cold or rainy, or when you need to beat the heat for an afternoon.

So no matter when you visit, consider purchasing a museum ticket.

If the skies are clear, our observation decks offer impressive views of Chicago year-round.

These viewing spaces tend to be most popular in the summer, so travelers coming outside of those months will enjoy shorter lines and fewer crowds.

Choose between the Willis Tower Skydeck or 360 Chicago at the John Hancock Tower.

Best Months for Theater, Comedy, and Live Entertainment in Chicago

While you can see great theater, comedy, or live music anytime in Chicago, there are a few special events to be aware of when planning your trip.

December offers seasonal holiday shows, such as the Goodman Theatre’s long-running A Christmas Carol. Other popular theatres include:

Music lovers can enjoy the Blues Festival in June each year, or live performances all year round at our most popular clubs:

Laughter is a year-round event in Chicago at the legendary Second City or iO Theater!

Highlights of Each Month

The holidays may be over, but the winter events are still open, such as ice skating at Millennium Park’s McCormick Tribune rink, or the ice ribbon at Maggie Daley Park.

We recommend exploring our museums, theaters, and the interior of the free Chicago Cultural Center to get the most out of your time.

The weather is still very cold in February, so indoor experiences such as museums and restaurants will be a worthwhile way to spend your time.

If you like cars, the Chicago Auto Show is annually held at the McCormick Place convention center for anyone looking to see or test drive the latest models from major worldwide manufacturers.

St Patrick’s Day is the highlight of March when the Chicago River is dyed a bright green color on the Saturday before the holiday to celebrate the Irish heritage in Chicago.

Pub crawls and parades give us the first taste of Spring fun, although the weather is still very cold.

The Major League baseball season begins in late March, so you can watch a Cubs or White Sox game between now and late September.

If you visit Chicago in April, be sure to see the beautiful tulips that bloom along Magnificent Mile and State Street in the Loop neighborhood just after the Easter holiday.

Take a walking tour to have an expert guide show you any of these neighborhoods:

Celebrate Cinco de Mayo at the start of the month, or visit during Memorial Day weekend to mark the official start of summer with a parade on State Street and fireworks at Navy Pier every Saturday at 10 pm and Wednesday at 9 pm.

June is a big month for festivals, including The Chicago Blues Festival and Taste of Chicago. The Blues Festival is a free citywide festival that occurs in the early weeks of June at Millennium Park, with a range of headliners from the past and present of the jazz, soul, R&B, gospel, rock and hip hop scenes.

Taste of Chicago is a multi-week summertime event that offers tastings from our city’s best restaurants. Bring cash or credit card for the individual menu items, though the event itself is free of charge to enter.

It’s also Pride Month, with the annual Chicago Pride Parade happening at the tail-end of the month on the North Side along North Halsted Street in the ‘Boystown’ neighborhood.

The Fourth of July fireworks are best seen at Oak Street Beach or on Navy Pier.

The Square Roots festival in the Lincoln Square is another option for anyone looking to party like a local listening to live music with a craft beer in hand!

Outdoor events continue to be popular, including the free Chicago Air and Water show that usually occurs in mid-August along North Avenue Beach and the Lakefront.

Foodies should check out the annual Ribfest in Northcenter in the later half of the month for irresistible BBQ with plenty of live music and culture; an average of 50,000 pounds of pork is consumed annually at this event.

Live music at Millennium Park continues with the Chicago Jazz Festival in early September, before the weather gets too cool.

The NFL season begins, so you can go to a Bears football game at Soldier Field while you’re in town.

October isn’t just for pay-what-you-like haunted history tours, though it is a fun way to celebrate the spooky Halloween season.

The Chicago Marathon occurs in the middle of the month, with an annual participation of up to 40,000 runners.

Hotels will be fully booked the week of the marathon, so book early if you’re coming this month.

The NHL and NBA seasons begin, so you can attend either a Bulls or a Blackhawks game at the United Center and cheer on the local teams!

As the weather cools, the tourist season is officially over. November is a quiet month to visit and explore Chicago like a local.

At the end of the month, The Chicago Thanksgiving Parade runs along State Street on Thanksgiving morning to kick off our holiday season.

Enjoy the holiday season in the downtown Loop neighborhood. Go ice skating at Millennium Park beside our city’s Christmas tree.

Visit Macy’s for shopping and a meet-and-greet with Santa Claus or visit our German-themed Christmas market, Christkindlmarket, at Daley Plaza.

There are several holiday performances around town, including Charles Dickens’s A Christmas Carol at the Goodman Theatre.

Want to see it all? Join our seasonal Holiday Tour with one of our jolly tour guides!

Ring in the New Year on Magnificent Mile at one of the many hotel ballrooms, like The Drake Hotel or London House.

Top Things to Do in Chicago at Night

Top Things to Do in Chicago at Night Andy has been a Chicago tour guide with Free Tours by Foot since 2015. He loves guiding groups around the Windy City telling stories of the past, offering tips to enjoy your visit, and showing off the city's world-class architecture. Andy is also the host of the Free Tours by Foot Chicago Youtube Channel, offering traveler tips and virtual tours.
Updated: June 6th, 2022