This post is about taking a tour of New York's City Hall and includes information about tickets, directions, what you will see there, and nearby attractions. 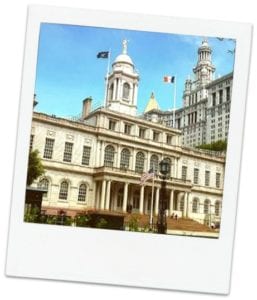 New York’s City Hall, located in Lower Manhattan, is the country’s oldest city hall that is still used for its original purpose.

While most of the city government offices are now housed in the big, magnificent Municipal Building across the street, the Mayor and the City Council still work about of City Hall.

Given the long and sometimes tumultuous history that took place in City Hall, tours are offered to the public for free. (For more history, see below).

Taking a City Hall free tour makes for a great inclusion in your sightseeing in Lower Manhattan.

Besides City Hall, there are many more iconic attractions to see in Lower Manhattan. Check out our long list of attractions in NYC.

Tip: Consider joining our pay-what-you-like Lower Manhattan tours before or after a City Hall tour.

As you can see on the map, there are multiple subway stations surrounding City Hall.

You can use this link to Google Maps to get exact directions from your departure point.

Tours are held on Wednesdays at 12 pm and Thursdays at 10 am (subject to change for any special events at City Hall).

To take this free tour you must make a reservation.

As tours are limited to 20 people, we recommend that you make reservations as soon as possible.

Click here to make a reservation.
On the tour, you will see the historic and beautiful rotunda, the City Council chamber, and Governor's Room, a reception room that houses part of the City Hall Portrait Collection and historic furnishings.

Some things to note:

City Hall is located in the heart of Lower Manhattan, an area that has countless things to do, day and night.

Below we list just a few of our favorite Lower Manhattan activities.

Take a sightseeing tour of Lower Manhattan and learn about its rich history, its architecture, and more.

Visit the 9/11 Memorial which is located a few blocks away from City Hall and is free to visit.
Go to the top of One World Observatory (“Freedom Tower”) for jaw-dropping views of New York City.

Take a free ride on the Staten Island Ferry for fantastic views of the NYC skyline.

Last but not least, walk over the Brooklyn Bridge - the entrance to the pedestrian path is located just across the street from Cty Hall!

We offer both day and night pay-what-you-wish walking tours of the Brooklyn Bridge and also have a GPS-enabled audio tour that you can use any time of the day or night. The present-day City Hall is actually the third one in the city’s history.

In the Dutch colonial era (when the city was called New Amsterdam), the city hall was called Stadt Huys (State House, in Dutch) and was located on Pearl Street in a former tavern.

The city government operations then moved to a new home on Wall Street in 1700, where they would remain for the rest of the British colonial era.

The Wall Street building also served as the first United States Capitol Building for New York’s brief period as the US capital city.
It resumed functions as City Hall when the capital was moved to Philadelphia and continued as such until the present building was opened in 1812.

Plans for the current City Hall began in 1802 when the city had a design competition for the future building.

The competition was won by the design team of Joseph Francois Mangin and John McCombs Jr. Mangin, the principal designer.

McCombs was the architect of Old St. Patrick’s Cathedral in Little Italy.  He also designed Castle Clinton in Battery Park. You can see both these buildings still. Though the competition was in 1802, construction did not begin until 1810.

This was due in part to objections from the City Council, saying that the design was too extravagant and costly.

The architects re-worked the design, making the building smaller, and reducing the amount of marble used.

They decided to only have the façade done in marble and to use cheaper brownstone on the back.

The site for the City Hall was at the far northern edge of the present city, so they reasoned that not many people would see the back anyway.

Midway through construction, in 1811, the City Commissioners unveiled the grid plan for Manhattan, which quickly moved the city northward.

The mismatched back and front of the building were not remedied until 1954 when the entire building was refaced with Alabama limestone.

Courtney is a lifelong New Yorker fascinated with the city’s history, culture and cuisine. She loves exploring the world, as well as sharing her travel expertise with others. She joined the Free Tours by Foot team in 2011, first as a guide and then as a writer. She has a law degree, a teaching degree and a worn-out passport. Her motto is “Have backpack, will travel”.
Updated: October 3rd, 2021