This post covers visiting the Crown Jewels in the Tower of London, including what they are, where they are kept and, how you can get tickets to see them.

You can skip this post and purchase tickets to the Tower of London and Crown Jewels here.

TICKETS FOR THE CROWN JEWELS

Access to see the Crown Jewels is included with a ticket to the Tower of London.

You can also purchase a tourist pass and use that to enter without waiting in line for tickets.

In particular, the London Pass and the IVenture Card offer a cost-effective way to visit the Crown Jewels and skip the queue. If you're planning to take a tour of the Tower of London, it's worth noting that tickets are included with some outings from Take Walks.

One of their more popular options is a tour which includes early access to the Crown Jewels, allowing you to avoid the lines and get in before everyone else!

London in a Day

There are a lot of details to consider before going to see the Crown Jewels.

This section will provide information about the best times to visit, how to get here, and what to expect.

For more details, make sure to read our post about visiting the Tower of London.

Some visitors recommend getting there as early as possible and heading straight to the Crown Jewels.

Due to their popularity, the only way to ensure you won't be waiting in line for a while is to get there while the crowds are still relatively small.

Consider arriving at the Tower of London right when it opens and doing your best to see this attraction between the hours of 9 am - 10 am.

To save time, consider an early bird tour that gets you into the Tower of London and the Crown Jewels before the general public.

Several guests also indicate you'll run into fewer crowds during weekday mornings than during the weekend.

They also note that weather can play a factor, as people are far less likely to visit the Tower of London on a rainy day than when the sun is out.

Most people who choose to visit the Tower of London will spend at least 15-30 minutes in line waiting to see the Crown Jewels.

Plan on setting aside at least 45-60 minutes for the entire experience.

Many visitors recommend setting aside at least 3 hours to see the entirety of the Tower of London.

Several guests note that even that might not be enough time for everything, so prepare for the possibility that you will spend up to 5 hours at this landmark.

To save time, consider an early bird tour that gets you into the Tower of London and the Crown Jewels before the general public.

Please keep in mind that you will not be able to take any photographs while visiting the Crown Jewels. Cameras are strictly forbidden and visitors are not allowed to take pictures.

Be aware that guards may try to stop you if any attempt is made to use a camera or snap a shot of this exhibit.

WHAT ARE THE CROWN JEWELS?

One of the most enduring symbols of Monarchy in the United Kingdom is the Crown Jewels and no visit to London should be undertaken without a visit to see this most stunning of collections.

The Jewels have been available for the public to observe for centuries and millions have traveled from around the world just to see these most remarkable creations.

More than just a collection of crowns, the Crown Jewels actually encompass present and past crowns belonging to Sovereigns, Consorts and Princes of Wales, scepters, rings, swords, orbs, spurs, robes, bracelets, and gold and silver plate!

The ceremonial and symbolic objects used during the coronations of British Kings and Queens are collectively known as the Regalia.

Not just used for their beauty, these are the most treasured and revered items in the Crown Jewels, as these are the pieces that are used in the centuries-old coronation ceremonies.

The Jewels are the most powerful symbols of Monarchy and they hold both cultural and religious significance.

It is lucky that the jewels are on display today as throughout their history it is believed they had been lost (by King John in 1216), used as collateral (by Edward III in the 1370s), pawned (by the wife of King Charles I in the 1640s), broken down and sold (by Oliver Cromwell), and nearly stolen (by Thomas Blood in 1671)! The majority of the pieces on display today date from the 17th century.

In 1660 King Charles II had a new set of Royal Regalia made – the ones on display today – however, there is one artifact that dates from before this time: the 12th century Anointing Spoon – still used in coronation ceremonies today.

When Charles commissioned the Crown Jewels, he spent the princely sum of £13,000.00 (around £1 million in today’s money).

He also spent a further £18,000 to create a set of banqueting plates and a golden altar, as well as a baptism font.

There are actually two baptism fonts held at the Tower of London today.

The first is the original commissioned by King Charles II but the second dates from the reign of Queen Victoria.

King Charles II is particularly notable for his string of mistresses and illegitimate children, many of whom he officially acknowledged and had baptised in the royal font.

Queen Victoria, a staunchly conservative woman, refused to have any of her children baptized in the same font as Charles II’s ‘bastards’ so she insisted that a new one, known as the Lily Font, be created just for her family!

Historically, the Jewels were kept behind bars and visitors were able to put their hands through the railings and touch the Jewels! Today, of course, such easy access to the Jewels is strictly prohibited.

Visitors to the Tower wishing to see the Crown Jewels will find them in the Jewel House currently in use, dating from 1994.

Visitors enter through vault doors containing electronic beams and steel shutters. The vault doors are said to be able to withstand a nuclear bomb blast!

All the jewels on display are resting on French velvet, are kept behind 2in (51mm) thick shatter-proof glass and filtered air circulate in the cases that hold the Jewels.

The following list highlights the most famous pieces of royal regalia, explaining what they are and how they are used.

Dating from 1661, and considered the principal piece of the Regalia, this is the crown that is worn at the moment the monarch is crowned in Westminster Abbey.

The crown is named after Edward the Confessor and its’ last usage was at the coronation of our current Queen Elizabeth II in 1953.

This is the crown used as a symbol by the Queen and is the one depicted in coats of arms, badges, money, and other insignias (including the side of our famous red telephone boxes!) throughout the entire Commonwealth.

Weighing nearly 5lbs, Queen Victoria chose not to be crowned with St. Edward’s because of the weight!

This is easily the most famous piece of the Crown Jewels.

year at the State Opening of Parliament.

The Crown consists of a purple velvet cap with ermine border and holds 2,868 diamonds, 273 pearls, 17 sapphires, 11 emeralds, and 5 rubies.

The Crown of Queen Elizabeth

Made for Queen Elizabeth, the wife of King George VI in 1937 (our current Queen’s parents), the Crown of Queen Elizabeth was the first crown for a British consort made out of platinum.

The arches on this crown are detachable so that it may be worn as a circlet instead (as she wore it during the coronation of Queen Elizabeth II).

It is set with 2,800 diamonds and holds the most famous diamond in the Royal Regalia: the Koh-i-Noor.

Previously the largest known diamond, originating in India and coming in at 793 carats uncut, visitors come from around the world simply to see this stunning diamond.

The Sovereigns Orb weighs 42 ounces, is surrounded by pearls and gemstones, and was made for the coronation of King Charles II in Symbolically, the Orb represents the Monarch’s role as Defender of the Faith and Supreme Governor of the Church of England.

The orb is placed in the Monarch’s right hand by the Archbishop of Canterbury during the coronation.

At the end of the ceremony, it is carried in the left hand, and in the right, the Sceptre [below] is held.

The Sovereign’s Sceptre with Cross

Also known as St. Edward’s Sceptre or the Royal Sceptre, this piece holds The Star of Africa, or Cullinan I, a second cut of the same diamond found in the Imperial State Crown that was set into place in 1910.

Cullinan I is still the largest colourless cut diamond in the entire world, weighing in at 530 carats.

This gem can be removed from the sceptre and worn as a broach.

WHERE ARE THE CROWN JEWELS?

Guarded by Yeomen Warders, the jewels are kept in The Jewel House at the Tower of London, where this precious collection has been held since the 14th century.

We recommend using this Google map for directions to the Crown Jewels from anywhere in London. 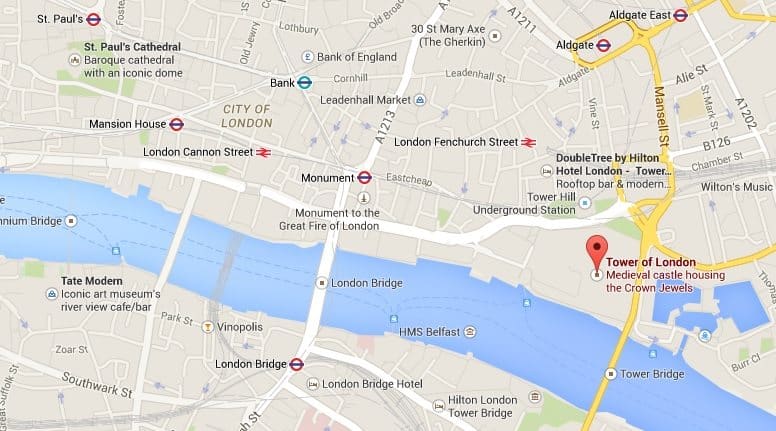 The Tower of London is from the Tower Hill Underground Station, but it's also with walking distance from Monument, London Bridge, and a few other stations.

The Tower of London is located adjacent to the Tower Bridge.

If you are considering purchasing a hop-on-hop-off bus ticket, keep in mind that all the major companies have stops at the Tower of London and some offer discount combo tickets.

How to Find Them

The Crown Jewels are found at the Jewel House near the center of the Tower of London landmark.

The building containing this attraction is located right next to the St. Peter Ad Vincula Royal Chapel and the Fusilier Museum.

Use the map below to orient yourself and find your way to this famous site.