Berlin’s district Friedrichshain is trendy and rough, with lots of graffiti and a distinct East German charm and an off-beat alternative culture. It’s very low key, and not yet as commercialized with a big student population, low rents, but also a rich history in working-class roots.

Come and explore this district on a self-guided tour of Friedrichshain. You can follow the tour via Google Maps.

Save more money with the Berlin Pass, and be sure to check our full list of self-guided tours of Berlin. After WW2, in 1950, the train station was named Ostbahnhof (east train station), since it was the largest station within East Berlin.

With the fall of the Berlin Wall, these plans were never accomplished and the area soon lost its appeal. In 1998, the station was renamed Ostbahnhof, when it lost its importance to the new central train station (“Hauptbahnhof”) near the government quarter.

Confused yet? You are not alone.  If you had asked a local East German between 1998- 2002 where the main train station was, you would have gotten two different answers, because the “new” name took some time getting used to again. You need to visit the YAAM (Young African Art Market) (B) while you still can.

This off-beat sport and cultural center and city beach by the river Spree is a successful integration project and popular hang-out bringing people from different cultures together.

The YAAM had to move location several times and city investors are threatening its existence. Along Mühlenstrasse, this world-famous 1.3 km long East Side Gallery (C) is a former piece of the Berlin Wall.

It depicts paintings from international artists all commemorating piece and the political changes when the Berlin Wall fell. Most of the paintings have been repainted, mostly by the same artists and a lot of restoration works have been applied throughout the years.

In March 2013, organized protesters, including celebrity David Hasselhoff, came together when several segments the East Side Gallery were removed according to formerly agreed to plans for rebuilding the river waterfront.

Conservationists are urging the city government to apply for UNESCO world heritage status in order to protect the remainder of the East Side Gallery for future generations. The Oberbaumbrücke (D) (“Upper tree bridge”) gets its name from an old wooden bridge that stood nearby and was closed off with a huge tree trunk to serve as a tariff barrier for trade ships passing by the area.

This beautiful double-deck bridge was built in the late 19th century and had its first U-Bahn train cross in 1902.

The bridge is an important symbol of the reunification of east and west Berlin, connecting the districts of Friedrichshain and Kreuzberg, which were combined as one district in 2001.

An annual food fight on this bridge between Friedrichshainers and Kreuzbergers where rotten eggs and tomatoes are thrown celebrates this district merger.

Walk up Warschauer Strasse (E), crossing over the bridge and the train tracks. On your right in the distance, the black tower in the distance is the over 100-year-old Ostkreuz Water Tower which used to store water for the old steam engine trains. 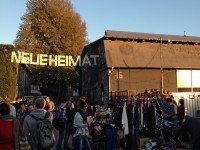 Take a right turn and on your right you will reach the RAW (F).

The area and its industrial halls are today used for weekend flea markets, off-beat music events, street art, dance, food vendors and much more. It’s very off-beat and you have to see it to believe it. When you exit the RAW complex, walk straight on Simon-Dach-Strasse (G).

This street, named after a 17th-century German poet, is renowned for its many bars, lounges, and cafes. Many of the 19th-century buildings remained undamaged during WW2.

Before you take a right turn on Wühlichstrasse, look to your right at building number 33. This plaque commemorates the resistance fighter against the Nazis Rudolf Paetzold who paid with his life at age 25 fighting the regime. Turn right at Wühlichstrasse and walk four blocks before you take a left turn into Knorrpromenade (H).

This street in the middle of the working-class neighborhood is named after the entrepreneur and engineer Georg Knorr who founded the leading railroad brake system.

Many of its houses were built around 1911 and were meant for the bourgeois. You can imagine its exclusivity when you see the gates before you enter the street from Wühlichstrasse. The gates on the northern side were destroyed during WW2. The street has many beautiful facades and little front gardens.

Take a left turn on Krossener Street until you reach Boxhagener Platz (I), endearingly called Boxi by its residents.

This scruffy square is a popular hangout and serves as setting for the weekly produce market on Saturdays, as well as the weekly Sunday flea market.

Take a look at the ground, you’ll notice the dark cobblestones that still mark today where the old 19th-century market vendors were supposed to set up their goods. Walk north on Gärtnerstrasse. Before you turn left on Boxhagener Strasse, take a look straight down at Mainzer Strasse (J).

After the wall fell, this street became a social magnet for then-provocative political and cultural believes, LGBT rights advocates, and left-wing radicals and anarchists.

The city government did not approve of the mostly rent-free squatters and ordered a police-driven removal on November 12th, 1990 that was pushed back with city-wide demonstrations, Molotov cocktails, and stone-throwing.

Despite the fight, in the end, the squatters had to leave.

Today there is no more evidence of the formerly run-down buildings since the whole street was reconstructed in 1992 with considerable financial input by the city government.

On this corner, this over 100 years old small cinema or “Kiezkino” Intimes (K) (pronounced in German: In-team-is, meaning intimate) is still the real thing, as it shows alternative movies on old fashioned movie strips for small budgets. Walk up Niederbarnimstrasse until you reach Frankfurter Allee.

This street gives you a full-blown blast of 1950s neoclassical Stalinist architecture. This was also the main path on which the Soviet army made its way into Berlin city center in 1945.

Basically all of the old building structures were bombed away during WW2 and it was the so-called Trümmerfrauen (translated: rubble women) who helped to remove the debris in this area so it could be rebuilt. The two towers on each side are supposed to remind of one of the former city gates that once stood here in the 18th and 19th century. The street continues as Karl-Marx Allee, formerly called Stalinallee. As a final stop, take the M10 tram for four stops north to Paul-Heyse-Strasse, and walk left towards Volkspark Friedrichshain (M) the eponym of the district.

This 52 hectares big area is the oldest public park in Berlin (1840s) and was built in commemoration of the centennial jubilee to the Prussian throne of Frederick the Great.

The two hills you see are called Buncker hills (O) and are covering up rubble and debris from WW2.

If you still have the energy, walk west towards the Märchenbrunnen (N), an early 20th-century water well that is surrounded by fairy tale stone figures.

+++Check out our self-guided tour of Berlin Kreuzberg as well. +++