This post is an overview of the Lisbon weather in October, including temperatures and rain forecasts, as well as things to do.

HOW HOT OR COLD IS LISBON DURING OCTOBER?

A few of the warmer afternoons, especially early in the month, can reach up near 28 C (about 83 F). 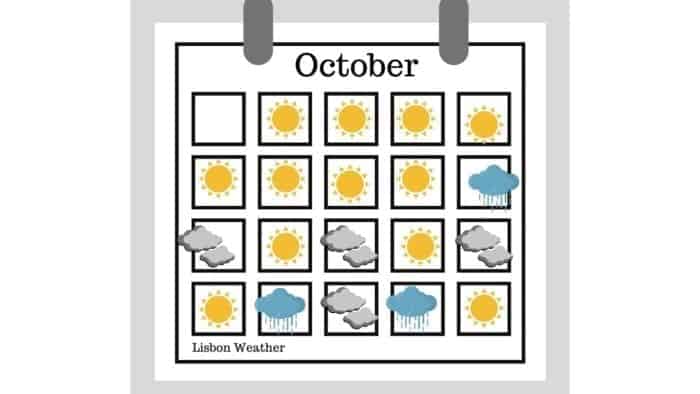 Late night and early morning low temperatures tend to be near 16 C (about 61 F) early in October dropping to near 13 C (about 56 F) by month’s end.

The all-time record low temperature for Lisbon during the month of October was 8 C (46.4 F).

Skies will be clear or at least partly sunny on 16-20 days this month with the sunniest days generally occurring early in the month.

Humidity levels range from comfortable to somewhat humid with only 2-3 days being considered muggy.

About 11.7 hours of daylight is available at the beginning of October, decreasing to about 10.6 hours by the 31st.

Pack both fall and summer clothes for this month so you can dress in layers.

Light summer clothes including shorts may be worn during the warmer and sometimes humid afternoons early in October but jeans or long pants are preferred.

Somewhat heavier fall clothes are best for much of this month, especially for the cooler evenings and mornings.

A windbreaker or light jacket will come in handy for those colder days and nights.

We suggest a windbreaker from Columbia because it's breathable and will work even on warmer days. It also has a packable hood!

A travel scarf is multi-use and good to layer when temperatures fluctuate.

WHAT TO DO IN LISBON IN OCTOBER

With moderate weather, most of the year-round activities can be enjoyed in October. Some things to do this month are:

Find out about the best things to do in Lisbon any time of year.

TIP: Many of the museums, tours, and historic locations one can visit this month are included with at least one Lisbon tourist attraction discount pass which can save you anywhere from 20% – 40% off general admission prices on average.