Come and take a self-guided tour of Broadway Theatre District. This tour covers some of the major theaters in Manhattan's Theater District.

This tour will take you anywhere from 1 hr 30 min to 2 hrs in length. Podcast Episode: Listen to tour guides Lori and Katherine discuss things to do in and around Times Square on an episode of our NYC Travel Tips podcast.

This podcast offers bite-sized audio clips with tips on how to plan your trip to NYC. You can get our podcasts on Apple, Google, or wherever you get your podcasts. This is the building that started it all when the New York Times decided to move its headquarters to this underdeveloped neighborhood at 43rd Street and Broadway in the late 19th century.

The 1904 opening coincided with the opening of a new subway station to be dubbed Times Square after the newspaper and this with the rapid growth of theaters in the area gave rise to America’s most important entertainment center and its greatest stars of theater, musicals, movies, and television.

Look up high and you will see the Waterford crystal ball lit up by LED lights above, viewed by millions every New Year’s Eve as it descends its post at the top of the building.

Look west down 42nd Street to see of renovated theaters such as the New Amsterdam and New Victory, part of the redevelopment of Times Square in the late 1990s when Disney moved in and revitalized the area.

Built in 1926 as part of a larger office building, the Paramount was built to be the largest, most opulent movie palace in New York.

It also featured live entertainment including in the 1940s a young singing sensation from New Jersey named Frank Sinatra who packed the house with swooning teenage girls. 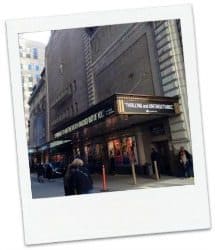 Named after the famed Broadway theater impresarios, the Shubert Brothers, this alley and the two streets it connects, 44th and 45th, are home to numerous beautiful and famous theaters managed by the brothers, all which have produced some of the most iconic plays and musicals in American history.

If you prefer a guided tour, there are a few options out there.

Inside Broadway Tours are included for free with the purchase of either the New York Pass and the Sightseeing Pass. Their tour is normally $35. This towering hotel over Times Square with a lobby 8 floors above the street level required the demolition of several historic and beloved Broadway theaters in the 1980s, an act dubbed the “Broadway Massacre” by New York theater lovers.

The new building featured a new theater on its ground floor, the Marquis. However, almost every Broadway show to open there has failed, leading to a belief in a curse on the theater for having been founded on the destruction of earlier theaters.

By the way, there are a lot of superstitions and ghosts in the theater tradition.

For example the well-known expression “Break a leg!” said to a performer about to enter the stage is based on the belief that if you wish them something good, the opposite will happen and vice-versa.

Also, never whistle or say the name “Macbeth” in a theater; it brings bad luck! Designed by the same architects (Carriere and Hastings) who built the New York Public Library, this beautiful Beaux Art theater is named for the husband and wife Broadway theater legends Alfred Lunt and Lynne Fontanne.

Formerly known as the Globe, it featured the Broadway debut of Fred and Adele Astaire in 1919 in Adele and more recently has presented revivals of the Sound of Music, Beauty and the Beast, and The Little Mermaid.

It originally featured a unique sliding oval roof that could be opened to let in fresh and moonlight. Two of America’s favorite Irish-Americans stand over the TKTS tickets booth at the very heart of Times Square.

Father Duffy was an Irish Chaplain and military hero as part of New York City’s all Irish 69th Regiment, “The Fighting Irish” in the Spanish-American War and in World War I.

He was the local priest of the neighborhood when it was a heavily Irish immigrant working class and was one of the few priests willing to give the sacrament to actors and theater people working nearby (long considered to be as lowly as prostitutes or criminals in late 19th-century society).

Immortalized by Jimmy Cagney in the film “Yankee Doodle Dandy,” Cohan was the first major Broadway star as an actor, songwriter, and playwright.

Author of “Give My Regards to Broadway”, “You’re a Grand Old Flag” and dozens of other American standards, he is the only musical theater actor to be honored with a statue in New York City.

Walk through the entrance to the Hotel Edison on 46th Street (between 7th and 8th Avenues) and you will be treated to a heavily renovated but still highly evocative Art Deco Hotel.

Opened in 1931 as one of New York’s largest and most modern hotels with 1,000 rooms, three restaurants, and a theater/ballroom.

The hotel’s namesake, Thomas Alva Edison, himself inaugurated the opening of the hotel by switching on all of the building’s lights. The famed Café Edison in the Hotel Edison’s lobby on 47th Street is affectionately nicknamed the “Polish Tea Room” in honor of its European immigrant owners and as a jab at the elite and much more highly-priced “Russian Tea Room” next to Carnegie Hall.

The café has been a meeting place since the 1940s for many Broadway actors, stagehands, directors, and producers (who seek a good bowl of matzo ball soup, an old-style hamburger with coleslaw, and many other classic New York diner offerings.

Sadly, in 2014 the cafe was closed as the hotel chose to renovate and add an upscale restaurant. Built in 1928 by the Shubert Brothers for the great actress Ethel Barrymore (of the famous Barrymore family and great-aunt to Drew Barrymore).

As befitting her stature as an actress and iconic beauty of her day, the theater is extremely ornate with much varied and rich detailing, including the striking metalwork underneath the sidewalk awning.

Tennessee William’s A Streetcar Named Desire premiered at this theater in 1947 starring a virtually unknown 24-year-old Marlon Brando. The role would propel him to stardom.

This humble synagogue, founded in 1917 for the working-class Jewish population of Hell’s Kitchen, became the place of worship for numerous stars of Broadway, film, and television, including the 3 Stooges, the Marx Brothers, Shelly Winters, Jerry Lewis, Oscar Hammerstein and many more.

It is still a functioning synagogue, which also offers performances and classes in the theater. Broadway’s local fire station. Note the bronze plaque commemorating the firemen from Battalion 9 who lost their lives on 9/11, a reminder that firehouses all over the New York City area lost firemen that day, not just those in lower Manhattan. This 1913 theater, designed to look like an 18th Century Paris townhouse, was built by the owner of the Boston Red Sox, who notoriously sold Babe Ruth to the New York Yankees to help finance the theater.

Ain’t Misbehaving and Talk Radio are two of the many famous productions that premiered at this theater.

This 1931 Art Deco office building once housed the major songwriters, publishers, and producers of the American popular music industry from the Big Band era of the 1940s through to Rock and Roll.

The Brill Building offices produced more top 40 Billboard hits than any other. Like the Actors Temple on 47th Street, St. Malachy’s Roman Catholic Church opened in 1902 to cater to a working-class community in the area and then later welcomed some of Broadway’s and Hollywood’s most notable stars as well as many other actors and theater workers.

Rudolf Valentino, Joan Crawford, Bob Hope, and Florence Henderson are just a few of the stars who attended services at St. Malachy’s.

It still caters to the theater community as reflected in a special mass late Saturday night for actors who perform in Sunday matinees.

From St. Malachy’s you can walk back to the TKTS Booth at Broadway and 47th Street and buy discount tickets to a Broadway show!

Find out how to get discount broadway tickets on our blog!!